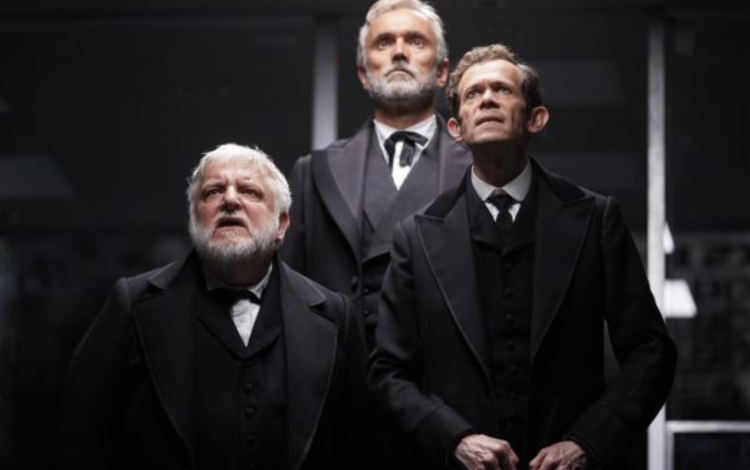 Alan Bennett’s Allelujah!, at the Bridge Theatre, is set in a cradle-to-grave hospital in the north of England called the Bethlehem. It runs for two-and-a-half hours and has a cast of 25, some of whom are required to do little more than join in the singalongs that frequently interrupt the action. They are members of a choir from the Shirley Bassey Ward, whose repertoire ranges from You Made Me Love You to Good Golly, Miss Molly to Blow the Wind Southerly. They are nimble on their feet too, after a shaky fashion, thanks to the choreographer Arlene Phillips.

The Beth, as it is known locally, is in imminent danger of closure. This dismal fact gives Bennett the opportunity to employ one of his favourite devices.

A television documentary team is on hand to interview, among others, the chairman of the hospital trust, the forbiddingly practical Sister Gilchrist, and Dr Valentine, who is threatened with deportation, as well as carefully selected patients.

Their remarks to camera are a substitute for the kind of characterisation other dramatists would consider it a duty to provide. But Bennett isn’t like other dramatists: he works with broad strokes and isn’t afraid of the clichéd and the stereotypical. Sister Gilchrist, brilliantly played by the always wonderful Deborah Findlay, is the nurse of everyone’s worst nightmares, while the bland Mr Salter, the chairman, acted with obvious relish by Peter Forbes, comes out with the requisite gobbledygook we have come to expect from officialdom. Sacha Dhawan

There seem to be several plots in this curiously unfocused play, the most prominent of which involves Colin, a Tory free-marketeer, who can’t wait to see the Bethlehem destroyed, and his old father, Joe, who just happens to be a patient in the hospital. Colin is a bit of

a health freak, who thinks nothing of cycling hundreds of miles. He’s also gay, to Joe’s disappointment. Joe is on the cusp of dementia, thus making conversation difficult, strained and occasionally absurd. Jeff Rawle is superb as Joe, while Samuel Barnett has to cope with making Colin something other than an automaton.

I have never subscribed to the myth that Bennett is a cosy writer. There’s a catty subtext in many of his plays – especially in The Habit of Art, where the easy swipes at Auden and Britten soon grow tedious. His diaries are becoming increasingly diva-like. Allelujah!, for all its occasional felicities, amounts to little more than a series of revue sketches.

I can only say that had I been stuck in the Bethlehem rather than the cardiac department of Hammersmith Hospital, I’d have been dead long ago. And there were no singalongs, thank God.

The first act of The Lehman Trilogy by Stefano Massini, adapted by Ben Power, at the Lyttelton Theatre, is completely absorbing. European productions of Massini’s play have used huge casts of actors to play even the slightest parts, but Sam Mendes has chosen to limit his company to just three – Simon Russell Beale, Ben Miles and Adam Godley. On Es Devlin’s revolving glass box, backed by Luke Halls’s video designs which show the changing America over 150 years, these dazzling performers not only impersonate the Lehman brothers but also the people they came into contact with when they left their impoverished homestead in Bavaria in the 1840s to make their fortune in that ‘magical music box called America’.

The opening hour-and-a-half constitutes the best kind of history lesson, with Henry (Russell Beale), Emanuel (Miles) and Mayer (Godley) talking about their various exploits in the third person. And what an astonishing story they have to tell, from the modest textile store in Montgomery, Alabama, that Henry opens, specialising in raw cotton, to their involvement with coffee and tobacco, which leads, in turn, to the railways, the first aeroplanes and munitions.

Their progress is made to seem irresistible – a matter of sheer hard work and unstoppable ambition. Accompanied by Nick Powell’s evocative music, beautifully played on an upright piano by Candida Caldicot, one watches and listens entranced as the actors, dressed in solemn black throughout, go about their beguiling – and often very funny – storytelling.

Then, as the play develops, a few doubts set in. No mention is made of the anti-Semitism the Lehmans must have experienced in the South, nor is much said about the undeniable fact that their growing wealth was accumulated through the slave trade. After the Civil War, they took advantage of the newly impoverished plantation owners, and once established as a bank on Wall Street, they somehow managed to survive the great crash of 1929.

The last, sorry years of the business, with nary a Lehman in sight, are covered cursorily, as if Massini could no longer bother with the nasty matter of corporate greed. But the acting is unforgettable.