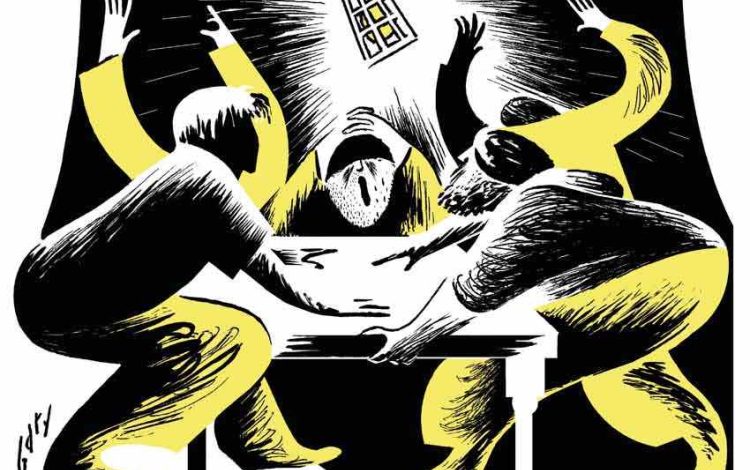 Streaming now at the theatre very near you

Bound begins in darkness, a lone voice singing something atmospheric, low voices humming in the background.

When the lights go up, you realise, from the fact that there isn’t very much light, and that there are no props on stage except the wooden decking the actors are standing on, that the Bear Trap Company, who are performing the play, are going to be relying a lot on atmosphere conjured up solely by themselves. (‘Austerity theatre’ is the correct term, I gather.)

When they board her, the only props are a table, which, when turned side-on to the front of the stage, serves as the bridge; lengthways, with five wooden chairs around it, it’s the mess. The regular crew have been joined by a Pole sent from an agency. I wish I could tell you who played him, or any of the other five crewmen, but Southwark Playhouse’s website lists just the cast’s names and not the characters. Still, as they’re all very good, I’ll name them: Thomas Bennett, James Crocker, Joe Darke, Alan Devally, Daniel Foxsmith and John McKeever. One of their Devon accents wasn’t quite convincing, or lapsed a little bit, but I'll let him hide in the crowd.

This was the first play written by Jesse Briton, who also directed it. It won a heap of awards at the Edinburgh Fringe in 2010, and Briton won the Most Promising Playwright Award from the Evening Standard the next year. I can see why – but only kind of. This is no fault of Briton’s but rather that of the sound engineer, who had what I suspect is the impossible task of trying to get the right balance when recording in the vaults of the Southwark Playhouse. A charming note on the website warns people that it can get chilly there, adding, ‘…obviously this was written Before Times and is no longer valid because this is a video of the show but we thought we’d leave it in, in case you want to turn the heating off in your house and put a jumper on for … “atmosphere”.’ If you are the kind of person who doesn’t like loud, echoey restaurants, you might have a bit of trouble picking out the dialogue at times.

But it doesn’t matter too much: you get the idea most of the time. Funnily enough, the most consistently comprehensible character on stage is the Pole, Kirk – I think (it’s been shortened by the rest of the crew from something they can’t pronounce). He’s also a useful addition to the mix in that his anxiousness to fit in brings the others’ characters into sharper relief than if he had not joined them. After all, one bearded Devonian in oilskins and with a beanie jammed over his head looks very much like another.

The remarkable thing is how well they manage it. The play is punctuated by darkness and, every ten minutes or so, the cast sing venerable sea shanties, a capella and in close harmony. This could have been over-earnest but the singing is very good, and Brixham has been a fishing port for centuries – so they’ve earned the right to celebrate the tradition.

Fishing is also traditionally a fantastically dangerous way to make a living, and this is very much addressed, as is the other traditional attribute of the profession: its exclusively male character. There is a female-shaped gap in their lives, with their wives either, at best, waiting for them or, more likely, decamped elsewhere. One of the fishermen says he’s not exactly what the average woman is looking for. Graham, the boat’s joker, tells him that he’s ‘the definition of the average man’, living as he does in a semi-detached house, and even being called John.

What this very simple and straightforward story is about, then, is danger and pride; it’s elemental. The good thing about Briton’s script is that it doesn’t have anything implausible in it (although I suspect that in real life there would be a lot more swearing, and the talk about women would be somewhat more indelicate, but this isn’t a criticism). And how they mime being on a boat in the middle of a Force 11 storm without looking silly is really quite something: with one swinging, wire-caged bulb, they use the power of darkness to bring us the terror of death.