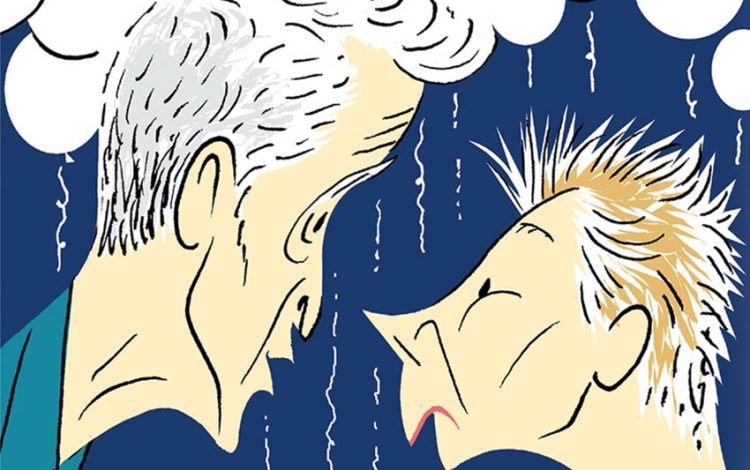 Constellations: Peter Capaldi and Zoe Wanamaker mix it up with three other couples
View Full Size
1
of 1

Constellations is a clever and intriguing play about the multiverse. By William Cook

‘Do you know why it’s impossible to lick the tips of your elbows? They hold the secret to immortality – so if you could lick them, there’s a chance you’d be able to live for ever.’

That’s the tantalising opening line of Nick Payne’s clever, moving play, first staged at the Royal Court in 2012. What follows is one of the most intriguing dramas I’ve seen in a long while – a meditation on the role of time, and the way it seems to shift throughout our lives.

Constellations is about the multiverse – the mind-boggling theory that there’s an infinite number of universes, in which every possible permutation of our existence is continually re-enacted, in an endless series of alternative versions of the lives we could have led. I can never quite work out whether this concept is enchanting or absolutely terrifying, but either way it’s a fascinating subject for a play. Rather than grappling with big historical questions, Payne focuses on two people who fall in love, and imagines what might have happened if events had unfolded in a variety of other ways.

This topic has been tackled numerous times in the cinema, in films such as Run Lola Run and Sliding Doors. However, unlike the big screen, which needs to paint big pictures, the theatre allows us to examine these cosmic conundrums in miniature.

Constellations makes you realise it’s not just our actions that shape our destinies. By replaying each scene several times, with minor variations that lead to dramatically divergent outcomes, Payne demonstrates that the things we say – even the way we say them – can send our lives shooting off on completely different courses.

Marianne is a quantum physicist; Roland is a beekeeper. When they meet, it seems they have nothing in common but, after several false starts, their relationship begins to grow.

Payne shows us how love affairs can turn on a few key moments, depending on our choice of words. Tom Scutt’s surreal set, a sea of white balloons, is a metaphor for this infinity of rival outcomes. It makes you wonder whether you chose the right path yourself.

And in one of those curious cases of life imitating drama, when I went to see this ingenuous two-hander I had a minor multiverse experience of my own. Expecting to see Peter Capaldi and Zoe Wanamaker onstage, I found Ivanno Jeremiah and Sheila Atim playing Roland and Marianne instead.

The cock-up was entirely mine, of course. Turns out director Michael Longhurst (who directed the play’s first run, in 2012) has decided to mix it up this time by casting four contrasting couples, of different ages and ethnicities, in the roles. Capaldi and Wanamaker have been alternating with Atim and Jeremiah during July. Then Omari Douglas and Russell Tovey are alternating with Chris O’Dowd and Anna Maxwell Martin until September.

Douglas and Tovey are both male, which is bound to make a big difference. Atim and Jeremiah are both black, which I thought might make a difference, but it doesn’t. These are roles that any two people could play. I’d never seen either of them onstage before – their relationship was a revelation.

I would have liked to see Peter Capaldi and Zoe Wanamaker as well (though they will have departed by the time you read this), but as I watched Atim and Jeremiah onstage, a rather odd thing happened. Because I’m so familiar with Capaldi and Wanamaker, and Anna Maxwell Martin and Chris O’Dowd, I started to hear their voices, too. It was just my imagination, the sort of thing that sometimes happens in the theatre, but it felt like a fleeting glimpse of the parallel worlds of Payne’s play.

Constellations is brief – only 75 minutes with no interval – but it lingers in your mind’s eye for a long time, like the memory of a lucid dream.

It’s a sign of what a fine play it is that I’m already eager to revisit it, re-enacted by one of the couples I’ve yet to see.