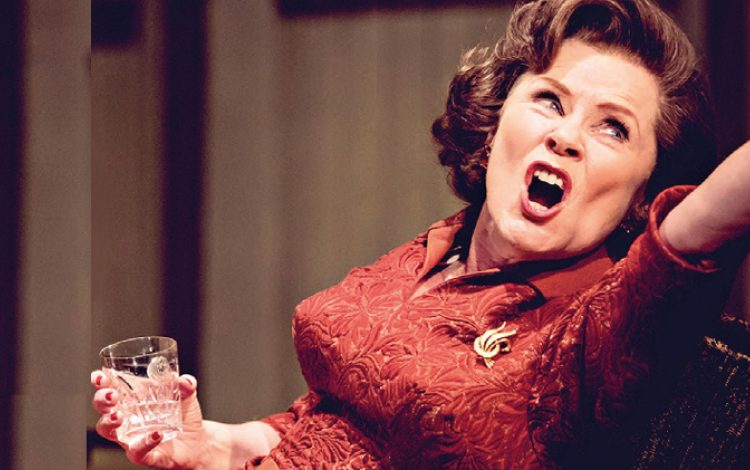 I first saw Edward Albee’s Who’s Afraid of Virginia Woolf? in 1964, with Arthur Hill and Uta Hagen as George and Martha, the permanently sozzled history professor and his termagant wife. They had played the roles for a year on Broadway before coming to London, which meant that their performances had a lived-in quality.

Richard Burton and Elizabeth Taylor in Mike Nichols’s celebrated film had nothing of their terrifying authenticity. They seemed little more than a couple of famous film stars relishing the opportunity to project themselves on to Albee’s characters, with Taylor picking up the second Oscar of her career.

And that’s the problem with this bleakly funny American masterpiece: it continues to attract actors who are intent on showing off their skills; who love doing what is known in the theatre as ‘drunk acting’, because it’s the easiest way to get an audience laughing.
Now, 53 years later, I have seen what I never expected to see – a revival of Who’s Afraid of Virginia Woolf? (at the Harold Pinter Theatre) that bears comparison to the original production. Another Mr Hill, Conleth, is the wry, quietly acerbic, desperately frustrated George, and Imelda Staunton is the snarling Martha, drawing on limitless reserves of venom with which to wound her husband.

Hill, in particular, is a revelation. He graces George’s lines with exquisite, understated comic timing. The scene in which George decides to read Spengler’s The Decline of the West as a distraction from the crazy goings-on involving Martha and their young guests, the newly married Nick and Honey, shows Hill at his most subtle. He chuckles to himself as he turns the pages while hell is being let loose behind his armchair.

James Macdonald is one of that currently rare breed, the self-effacing director. He respects the playwright and the players alike by honouring their intelligence. He isn’t using them to boost his own prospects. This is very much a company enterprise, with everyone in the cast giving of their best. Luke Treadaway as Nick is gauche and smug by turns, and Imogen Poots’s Honey is a pitiably silly rich girl. Staunton and Hill match each other in brilliance as they tear themselves apart and then, fitfully, put themselves back together again. They are wonderful.

Limehouse, the new play by Steve Waters at Donmar Warehouse, takes place on 25th January 1981, when Shirley Williams, Bill Rodgers and Roy Jenkins met at David and Debbie Owen’s home in London’s East End to discuss their ideas for a breakaway political party. The previous day, at a Labour Party Special Conference at Wembley, the Left had drowned out the voices of those who favoured a more centrist line.

Owen, it seems, was by far the most determined to sever ties with Labour, as it continued to commit political suicide under Michael Foot. He emerges as a bit of a bully here, getting ever more exasperated with Williams and Rodgers for not supporting him wholeheartedly. His contempt for Jenkins, whose term as president of the European Commission had ended only a week or so earlier, is never in doubt. Debbie, the literary agent who had Jeffrey Archer among her clients, is the unifying presence as she prepares lunch while the others bicker.

The piece is smoothly directed by Polly Findlay and persuasively acted. I enjoyed every minute of it, and was really moved when Paul Chahidi as Rodgers spoke of his deep reluctance to leave the party he loved. Roger Allam has great fun with his portrayal of Jenkins, casting a horrified glance at the dish of macaroni cheese Debbie Owen sets before him. Since it’s common knowledge that Jenkins pronounced the letter ‘r’ as a ‘w’, it was very mischievous of Steve Waters to have him say ‘rancorous’. Tom Goodman-Hill has the difficult task of making Owen’s single-mindedness not seem slightly deranged, and Debra Gillett catches something of Williams’s fundamental decency. Limehouse comes to an end with the birth of the Social Democrats.

There is a coda, in which Nathalie Armin as Debbie tells the audience that the Falklands War came to the rescue of Margaret Thatcher’s ailing premiership and ensured the demise of the Social Democrats. Discuss.

The irony is that Albee, writing in 1962 about the need to avoid the truth and take uneasy comfort in fantasy, was remarkably prescient. He presaged an America that was there when Trump was the golden apple in his daddy’s eye. If you want an insight into politics, go and see Who’s Afraid of Virginia Woolf?