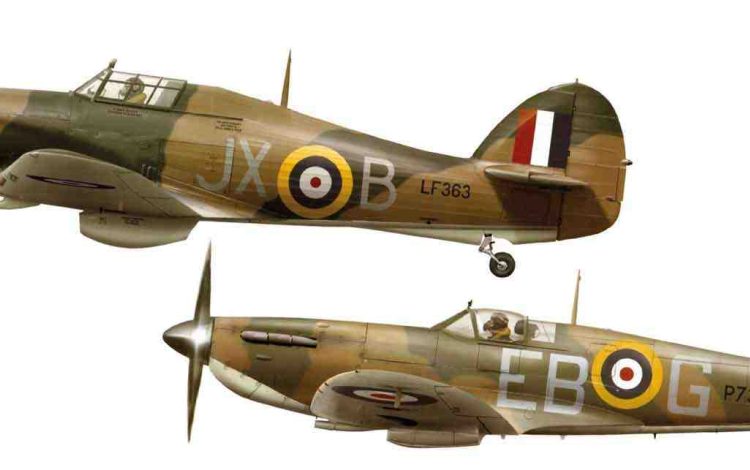 The Hurricane, an excellent gun platform. The Spitfire – grace with aggression
View Full Size
1
of 1

A Hurricane, shot down in 1942, is up for sale for £2 million.
Eighty years ago, the Battle of Britain changed the course of history, thanks to the Hurricane and the Spitfire, explains Leo McKinstry

A Hurricane, shot down in 1942, is up for sale for £2 million. Eighty years ago, the Battle of Britain changed the course of history, thanks to the Hurricane and the Spitfire, explains Leo McKinstry

After the Second World War, the former German army commander Gerd von Rundstedt was asked in a television interview if Stalingrad had been the turning point in the conflict.

His verdict was sound. The Battle of Britain (July 10-October 31, 1940), whose 80th anniversary falls this summer, changed the course of history. If the Luftwaffe had gained the mastery of the skies over southern England in 1940, then Hitler would have been able to enact his plan, code-named Operation Sealion, to mount a seaborne onslaught across the channel.

More than 2,000 vessels stood ready in the occupied channel ports to carry the vast invading army. But, by mid-September, thanks to the heroism of the RAF, the German dreams of conquest had ended in failure. Fighter Command’s resistance forced the Nazi war machine to look eastwards to the Soviet Union, with ultimately disastrous consequences.

The scale of the challenge that confronted the RAF at the start of the battle was daunting. Not only had Nazi Germany proved invincible in its brutal advance across much of Europe, but its airforce was far larger than Britain’s. By the summer of 1940, the Luftwaffe under Herman Goering comprised over 2,600 operational aircraft, including 1,200 bombers, 280 dive bombers and 980 fighters. Among this aerial armada was the single-engined Messerschmitt 109, one of the most deadly fighters in the world because of its speed at over 350mph and the lethal firepower from its cannons.

Against this colossal instrument of war, RAF Fighter Command had only around 900 operational planes, many of which were obsolescent, like the Gloster Gladiator biplane. But this imbalance was outweighed by three crucial factors: the quality of the RAF’s two main fighters; the efficiency of its organisation; and the courage of its airmen. With these assets, Fighter Command turned what could have been this country’s darkest hour into our finest.

At the heart of Britain’s defences were the Supermarine Spitfire and Hawker Hurricane. Both were advanced monoplanes that had entered service in the late 1930s and had transformed the capability of the Fighter Command. They both had eight .303 Browning guns in its wings, capable of delivering 2,400 rounds, and were powered by the reliable, potent Rolls-Royce Merlin engine with its distinctive throb.

Combing grace with aggression, the Spitfire was the faster of the two, with a top speed that matched the Messerschmitt 109. The plane’s manoeuvrability made her a delight to fly, as George Unwin of 19 squadron recalled: “There was no pushing or pulling or kicking. You breathed on it. She really was the perfect flying machine.”

The genius behind the Spitfire was the chief designer of the Supermarine company, Reginald Mitchell. A former locomotive engineer from Stoke, he built his aeronautical reputation by creating a world-beating series of fast seaplanes in the late 1920s.

Yet, for all his talent, his first monoplane fighter design for the RAF, known as the Supermarine type 224, had been poor; “a dog’s breakfast” in the words of one pilot. Mitchell transformed the design, particularly by installing the Merlin engine and adopting a curved, elliptical wing.

The radical new plane performed superbly on its maiden flight on 5 March 1936, though tragedy struck the following year when Mitchell died of cancer, aged 42.

By then, the production of the Spitfire was plagued by difficulties, partly because the plane was so revolutionary; partly because Supermarine was a small company, with little experience of big contracts. An attempt by the Government to galvanise output by the construction of a huge factory at Castle Bromwich, Birmingham, with the aim of turning out 1,000 Spitfires by June 1940, led only to be more disappointment due to weak management and a recalcitrant workforce.

But the Hawker Hurricane compensated for the Spitfire’s early limited numbers. Although 30 mph slower than the Spitfire in level flight, it was an excellent gun platform, extremely robust, and much easier to build.

The plane was the brainchild of Hawker’s irascible designer, Sir Sydney Camm, a carpenter’s son from Berkshire, whose fertile mind was responsible for 52 types during his long career, including the vertical take-off Harrier.

The Hurricane was his most important contribution to British history. Even when the Spitfire’s manufacturing problems had been overcome by July 1940, due to the arrival of dynamic press baron Lord Beaverbrook at the Ministry of Aircraft Production, the Hurricane still made up the bulk of Fighter Command’s resources. There were 29 Hurricane squadrons compared to 19 Spitfire squadrons. During the battle itself, for every two German planes shot down by Spitfires, the Hurricanes brought down three.

“It was the aircraft for the right season. It literally saved the country,” said the great test pilot Eric Brown.

The effectiveness of these two planes was enhanced by the highly sophisticated control system created by the austere Fighter Command chief, Sir Hugh Dowding. Exploiting the latest radio and wireless technology, information was filtered from radar stations and the Observer Corps through a network of operations rooms, so that fighter squadrons could be targeted swiftly at incoming Luftwaffe raids.

Throughout the battle, the Germans were bewildered at how the RAF always seemed to know their location. “I had no idea how the British could evolve and operate so intricate, so scientific and so rapid an organisation,” recorded the US military attache Raymond Lee after witnessing the Dowding control system in action.

But technical sophistication would have meant nothing without raw bravery, and the RAF had plenty.

One Hurricane pilot, James Nicholson, won the Victoria Cross for a successful pursuit of a twin-engine Messerschmitt 1100, even when his own plane was hit by cannon fire and engulfed in flames. The near-indestructible New Zealander Al Dere destroyed 17 enemy aircraft from May to August 1940, during which period he was shot down seven times, bailed out three times, collided with a Messerschmitt 109, had a Spitfire of his blown 150 yards by a bomb and had another explode just seconds after he had scrambled clear from its wreckage. Altogether 544 Fighter Command airmen died in the battle, while the entire death toll for the RAF, including other Commands, reached 1,542. And now the last of the Few are down to one: Group Captain John ‘Paddy’ Hemingway, 100, the only survivor after the death of Terry Clark, a Blenheim air-gunner, who died on the eve of the 75th anniversary of VE Day in May, aged 101.

This valour was displayed as the campaign unfolded over three stages. The first, lasting from 10 July until mid August, saw the German focus their attacks on the south coast and channel shipping. Then Hermann Goering, the erratic head of the Luftwaffe, switched tactics. From “Eagle Day”, 13 August, his force concentrated on pulverising Fighter Command in the air and on the ground.

The RAF put up a ferocious struggle but,by early September, German superiority in numbers had made itself felt. For the RAF, men and machines were running short. Between 24 August and 6 September, a quarter of Fighter Command pilots were lost in action, while 295 planes were destroyed. The strain was particularly heavy on the Command’s 11 Group, based in the south-east under Keith Park.

But then the Luftwaffe made a catastrophe error. Thinking Fighter Command had been knocked out, Goering ordered his force on 7 September to embark on the bombing of London. This was the start of the Blitz, and, though devastating for parts of the capital, the Luftwaffe’s move gave Park and Dowding a crucial breathing space to regroup.

When the Germans tried to resume the assault on the southern airfields, Fighter Command was waiting. On 15 September, which subsequently became known as “Battle of Britain Day”, 56 Luftwaffe planes were downed, more than double the total of RAF losses. Two days later, the Fuhrer ordered the postponement of Operation Sealion.

“Hitler knows he will have break us in this island or lose the war,” Winston Churchill said in his majestic “Finest Hour” speech on the eve of the Battle of Britain. The men of Fighter Command turned that prophecy into a reality.