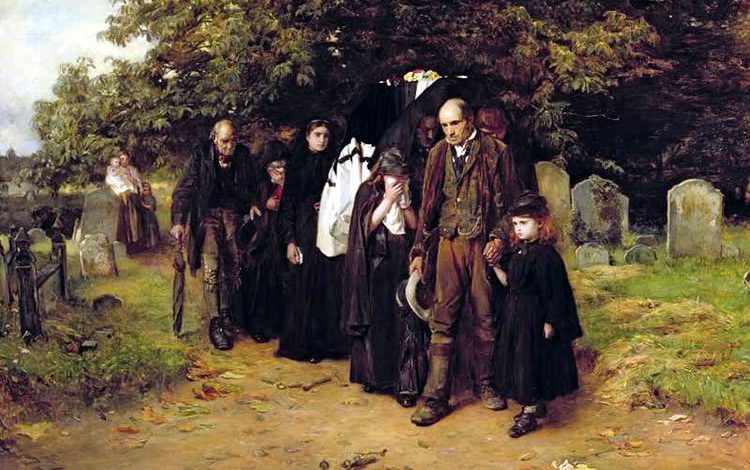 I am the Resurrection and the Life, or The Village Funeral, Frank Holl, 1872, Leeds City Art Gallery
View Full Size
1
of 1

If you want the final say on your funeral, it pays to plan ahead, says Andrew Watts

My local newspaper’s Christmas edition carried an interview with a local funeral director.

This was a canny bit of timing on her part: the number of deaths in this country always peaks after Christmas. January 6 – the last day of Christmas – has 25 per cent more deaths than average. (It is also the busiest day of the year for divorce lawyers.) She finished the interview by declaring that ‘funerals are for the living.’

She doesn’t really believe that. I know – the parish priest told me – that she regularly organises funerals at which she and the priest are the only mourners. Often these are ‘public health funerals’, where no next of kin could be found. It would be quite reasonable to give these people the no-frills service that the local authority is statutorily obliged to provide. But – perhaps because she saw a crucifix when she collected the body, and deduces that the deceased was a Christian – she arranges for a priest to give them a Christian ceremony. She behaves as if she believes funerals are for the dead.

For Lynch, the two essential tasks of a funeral – to dispose of the deceased’s body, and to mourn the passing of a life – are one, and he dismisses modern funerals as ‘commemorative events where everyone’s invited but the dead guy’.

Rosie Inman-Cook of the Natural Death Centre, a funeral education charity, disagrees: ‘The trouble with undertakers is they don’t want to think outside the box,’ she says. More people are separating the two functions; sometimes completely.

‘That’s the biggest change I’ve seen in the past five years: people are dealing with the essential disposal of the body by direct cremation, and holding a celebration, maybe around the sprinkling of the ashes.’

In direct cremation, the body is taken straight to the crematorium without any ceremony. The family do not attend – that costs extra – but they receive the cremated ashes. It is intended as an affordable option, although, for some people (such as David Bowie), it’s a choice.

Even when there is a ceremony at the crematorium, it is increasingly distinct from the main funeral.

According to Fr Keith Owen, an Anglican priest who trains clergy to conduct funerals, this is the biggest change since he was ordained.

‘Clergy used to do most of their services in crematoria; but then the church started to be more open, and people who weren’t regular churchgoers began having funerals in church, without the rigid time restraints.’

The half-hour slot at the crematorium – leaving by a different door so as not to run into the next set of mourners – transforms into a private ceremony for the close family.

Although cremation is now more popular than ever – over 77 per cent of bodies are cremated–not everyone wants to outsource the preparation and disposal of the body. Some families want a hands-on role in getting the dead where they need to be as part of their grieving process: washing the body themselves prior to the funeral, for example.

Rosie and her charity support families getting involved and in doing as much themselves as possible. ‘In this country, we are completely free. We can look after the body at home, if we want to; we can bury the body on our own property – we don’t need anyone’s permission [although the Environment Agency gently suggest it shouldn’t be near a watercourse]; we can book the crematorium; we can transport the dead–we can drive playing their favourite James Last CDs at full volume in an estate car we’ve hired for the job. We can buy a coffin online and decorate it ourselves – that’s a great way for families, especially children, to get involved. We can do what we like.’

One highly regulated option is burial at sea; you need permission from the Marine Management Organisation, and it will usually only be granted for one of two designated coastal sites, Newhaven in East Sussex or off the Needles on the Isle of Wight, chosen because they are not subject to strong shoreward currents. The coffin must be biodegradable and designed to sink quickly.

A more common and popular means of returning a body to nature is a natural burial site. Bodies are buried in eco-friendly coffins or shrouds, and Rosie is enthusiastic: ‘These burial grounds are incredible bits of protected habitat – and what’s left of you becomes a living breathing tree, rather than emissions up a crematorium chimney.’

But if you really want your body to be useful after death, leave it to a medical school.

‘We call them our silent teachers,’ says Kim Claridge from the London Anatomy Office. ‘People say they’re saving money on the funeral, but I’m not sure that’s the main driver for donating. A lot of our donors are in their 80s and they remember a time before the NHS; they just want to give something back.’

But what are they giving back? Claire Smith, Professor of Anatomy at Brighton, describes it as ‘the gift of exploration and knowledge to doctors and health professionals, who use that knowledge in the care of every patient they treat. I calculated that one single body donation can affect the lives of around ten million patients.’

Under Human Tissue Authority regulations, you must personally consent to donate your body to medical education before you die.

‘Although the consent form is a legal document,’ says Kim, ‘we don’t insist the family follow their wishes. They’re the ones that have to live with that decision.’ She advises talking to your family about your wishes before your death.

In fact, everyone I speak to for this article makes this point: written instructions don’t always get read until after the funeral. And then your loved ones have ‘got the guilt of knowing they’ve done the wrong thing, on top of everything else,’ says Rosie Inman-Cooke. ‘It’s so important to have these conversations with your family.’

Amanda Jane Dalby, a funeral director from Halifax, suggests the sooner the better. If you wait until you are seriously ill, your family will be reluctant to talk about your death, not least because they want you to keep positive about your potential recovery.

She says, ‘If you can talk to your family before you’re ill, then it’s not an upsetting conversation. It’s a great comfort to the family, knowing exactly what you want.’

Amanda is a no-nonsense Yorkshire woman – although, like most people who work in the funeral profession, she switches to caring and empathetic the moment I mention my mother’s death – and is disparaging about ‘cowboy’ undertakers.

‘One lot was using a motorcycle hearse [the coffin is carried in an adapted sidecar] but they hadn’t checked that the back door was closed properly. Going up the hill to the crematorium, the door opened and the coffin slid out!’

Even if you trust your family to choose the funeral director, that choice might have been made for them. Care homes often have a contract with a local undertaker to remove bodies quickly – in vans marked ‘Private ambulance’. While the next of kin is within their rights to switch to another undertaker to conduct the funeral, they rarely do in practice.

‘When somebody loses somebody, people are vulnerable and distressed,’ says Louise Eaton-Terry, a funeral costs expert at insurer Royal London. ‘They’re not thinking about what comes after, and, quite often, people are already on a path with a certain funeral director.’

And, once on that path, she says, ‘Prices and quality are not being assessed in the way other purchases are – it’s the ultimate distress purchase.’

According to Royal London, only five per cent of those arranging a funeral get quotes from more than one undertaker, despite the cost. The average cost of a funeral is now £3,785. Cremation fees and burial fees have been rising above inflation for years; but discretionary spending is also increasing.

‘You have to be quite brave to tell a funeral director you want to do things as cheaply as possible,’ says Fr Keith. ‘People assume they’re honouring the dead by spending more money.’

The only sure way to relieve your family from this assumption, or to assure them of it, is to leave specific instructions and talk with them about what you want.

As Amanda says, ‘Some people do want “fancy stuff”, and we can always arrange that. A black Victorian hearse, drawn by plumed horses, will set you back around £1,750; a release of doves is £200; or a jazz band to march the cortège up to the crem is £500. Some people like that, even in Yorkshire.’

The Competition and Markets Authority is currently investigating the funeral industry. The National Association of Funeral Directors said, ‘A key area that needed to be addressed was the unwillingness of people to accept the fundamental fact that they would die... By increasing awareness, consumers could be brought closer to behaving more like they would in any other purchase.’

In other words: remember thou that thou art mortal.

How to be a newsreader - Nicholas Owen