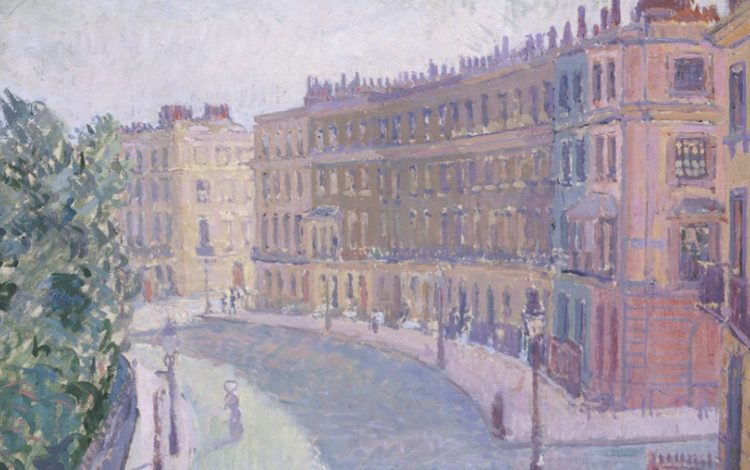 Mornington Crescent in Camden, home to Frank Auerbach, Walter Sickert and Spencer Gore, is under a death sentence from HS2, writes John Sutherland

Since 1954, Frank Auerbach, our greatest living artist, has lived in Mornington Crescent, NW1, immortalised, for the radio-listening masses, by Humphrey Lyttelton and Willie Rushton, and painted the beautiful curvature. He is still doing so in his mid-eighties, certifying to the fact that age need be no barrier to artistic achievement.

Along the way, No 6 the Crescent is where Walter Sickert (aka, Jack the Ripper, selon Patricia D Cornwell) painted his Camden nudes (other interesting curvatures).

A few doors down the Crescent lived Spencer Gore, who in 1911 did a mistily beautiful painting of the view from his window over a then garden (now the Black Cat building). It hangs in the Tate.

At the very tip of the Crescent is the house where the greatest of British caricaturists, George Cruikshank, lived (‘Oliver asking for more’).

David Gentleman (he who did the wonderful Charing Cross Underground murals, admired by the travelling millions every day) has always been a lover of this quiet, high-toned corner of NW1 – and has commemorated the reopened, and lovingly preserved in all its Edwardian dignity, Mornington Crescent Tube station (it has a plaque to Willie Rushton, inventor of the Mornington Crescent game, and himself a cartoonist of Cruikshank calibre).

Gentleman’s charming illustrations to Alan Bennett’s Lady in a Van: The Complete Edition commemorate Camden Town’s Gloucester Crescent, where he and his family lived alongside Bennett, Michael Frayn and Claire Tomalin, Mary-Kay Wilmers (editor of the London Review of Books) and Jonathan Miller, the country’s, perhaps the world’s, greatest polymath.

Not for much longer. It’s about to be raped. It is scheduled to be thrown under the wheels of what now looks like an unstoppable juggernaut. HS2 will demolish the Cruikshank/Sickert houses (farewell plaques) as the railtrack from Euston (smelling, odorously, of the Drummond Street curry valley it has destroyed en route) widens its girth.

Six hundred and seventy-five HGVs daily will, residents have been informed, thunder through the Crescent from, it is hazarded by the official HS2 document of late 2015. It will be uninhabitable for all but the deaf or destitute. That awful thunder, it is estimated, could go on for years. This in the interest of getting to Birmingham half an hour sooner. And something about stoking up a Northern Powerhouse, whatever that may be.

Originally HS2 was to exit central London underground. Too expensive. Crashing through cultural tissue is cheaper. But is it? HS2 will also have dire consequences on Camden Lock and Camden Market, a young people’s mecca. Thousands of youngsters, every day in summer and at weekends year-round, throng there. It’s exhilarating to go there. The air tastes young. Until HS2 is finished, pollution levels in Camden will be stratospheric.

It’s Stagg’s Gardens (and yes, Dickens’s Bayham Street blue-plaqued childhood house is under threat) all over again – for those who know their Dombey and Son. How does Dickens describe the train which leaves Euston?

‘The power that forced itself upon its iron way – its own – defiant of all paths and roads, piercing through the heart of every obstacle, and dragging living creatures of all classes, ages, and degrees behind it, was a type of the triumphant monster, Death.’

Call it the third Curse of Euston. First the Victorian destruction of Euston in 1837, then the destruction of the great Doric Arch, over which Betjeman and Pevsner wept in 1961, and now – the crowning blow – HS2. What does Charlton Heston say at the end of Planet of the Apes? ‘Damn you all to Hell!’ And that includes you, Lord Adonis.