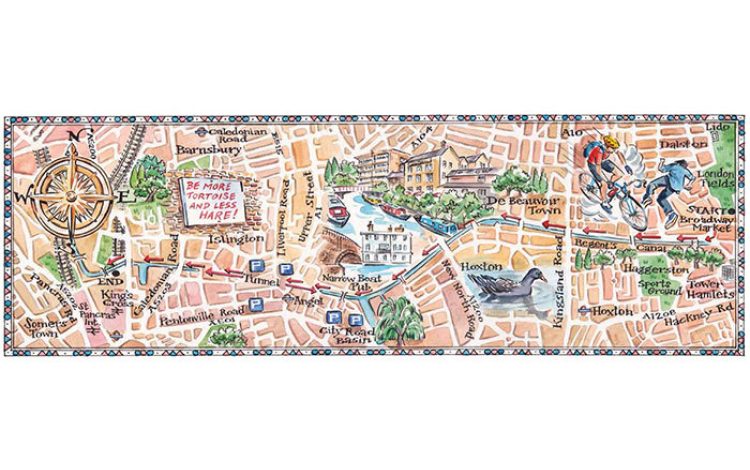 Patrick Barkham reflects on the peace of the canal

The second I stepped onto the towpath came a first: I caused a crash.

Walking must be the safest way of getting around but I hadn’t checked both ways and a bike, hurtling along the path, hurtled into me.

The cyclist fell off. ‘Sorry!’ he yelped from a prone position.

‘Sorry!’ I said, marvelling at how we were both so unhurt and so magnanimous.

I was walking west from Broadway Market to King’s Cross along the Regent’s Canal, inspired by my dad, who in retirement has walked every single mile of every towpath in England.

I can see why: canals offer a parallel universe, possessed of a perpetual water view, where everything – boats, coots, time – moves slowly. Except bikes.

Of the 2,000 miles of English and Welsh towpath, the three miles from Hackney to King’s Cross are undoubtedly the busiest. I was foolishly walking during the morning rush hour, when cyclists swooshed past every few seconds. Even with these reckless commuters, it was far more peaceful than the world above us.

A moorhen rippled across silver water and there were lots of narrowboats with pretty names such as Molly Malone and Emmaline. I didn’t see a single boat on the move because, in this location, each one is masquerading as an affordable home, moored three abreast in many places. Each roof was adorned with items both practical and romantic: coal, kale growing in pots, decorative kettles, kayaks, candles, bikes, solar lights, generators and empty bottles of Prosecco.

Twenty-two years ago, when I lived in Angel, and the towpath was much quieter, I’d jog east and usually turn back beneath a derelict bridge beyond the A10 because the terrain looked so forbidding. Today, that bridge carries the Hipster Express, otherwise known as the London Overground, between Hackney and Hoxton.

These days, the tatty council estates of De Beauvoir Town are thoroughly gentrified. The old industrial buildings – nine storeys, give or take a penthouse – blend in, but the newest flats are greedier and devour a larger slice of sky.

Over the pleasant, waterfall-like whoosh of water running through a lock gate came the menacing ‘ting!’ of a bell belonging to a fast-moving cyclist. It could mean ‘Please be careful – I don’t want to knock you into the water’ but it sounded rather more like ‘Move!’

Beneath each beautiful, old brick bridge, curved of back like a whale, the path narrowed to barely three feet wide. I cowered against the brickwork. If a bike came rushing in, we would collide – no question. ‘Be more tortoise and less hare’ implored a sign on a bridge. Some chance.

I felt sorry for my fellow walkers, constantly on edge. I felt less sympathy when I realised they were all plugged in to phones and podcasts, shutting out sensible belled warnings. Despite the near misses, there was never a shout. Londoners – so stupidly dulled of senses, so marvellously tolerant – remained determined to ignore one another.

Beyond the revamped Packington Estate and the Narrowboat pub, the sun shone over the lake-like expanse of City Road basin. Eucalyptus, weeping willows and jasmine created a lush summery feel. A walker strolled past in shorts. Ah, London in winter!

Ahead lay a cutting clad in sycamore and the dark hole of a long tunnel under a hill. This forced me up onto the streets. I was relieved to escape the cyclists, but the blare of jackhammers and sirens was still a shock as I weaved through Angel before rejoining the canal where it popped out again shortly before the Caledonian Road.

Even the least tranquil canalside offers more peace than the everyday city.

I walked 2½ miles along the Regent’s Canal from Broadway Market to King’s Cross – but the walk can be extended east to Victoria Park and west through Camden and around London Zoo and Regent’s Park. I recommend avoiding morning and evening (bike) rush hours!