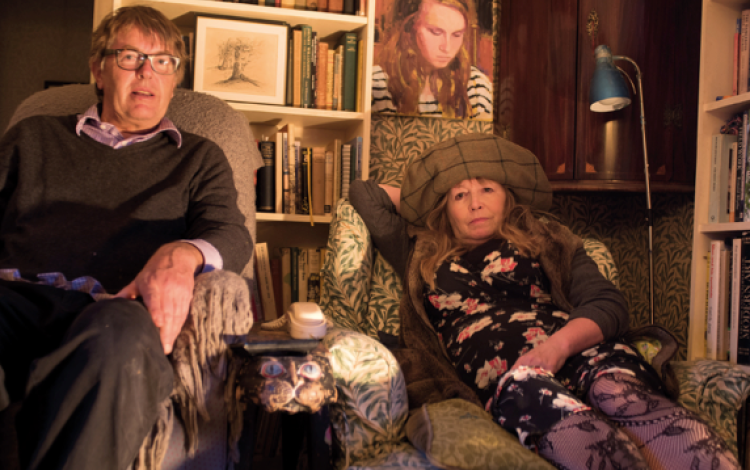 Giles Wood and Mary Killen only shared an hour together each day. And then Channel 4’s Gogglebox talent-spotted the painter and the agony aunt. Harry Mount discovers how late-onset fame saved their marriage

‘Have you got the brick?’ Mary Killen asks her husband, Giles Wood, as we leave their thatched Victorian cottage for lunch in Marlborough.

‘Would you like these?’ says Mary, handing over a pair of lady’s sunglasses, as I settle in the front seat, staring at the crack, ‘In case it smashes.’

Giles has just shown me round his charming garden, a shelter belt of wilderness he has planted to hide the flat Wiltshire prairies that lie beyond. He points out two deep, lethal incisions he has incised, fifteen feet up, into a tree.

In my namby-pamby, metropolitan way, I worry about it falling on passing toddlers.

‘There aren’t many people around – only builders,’ Giles says cheerfully, referring to the building work on his newly extended shed.

Welcome to the glorious haven from health and safety that is the world of Giles Wood, painter and Oldie Country Mouse columnist, and Mary Killen, regular Oldie contributor and author of the Dear Mary problem page in the Spectator.

Since 2015, they have become TV stars, too, as the bohemian couple with the William Morris wallpaper in Gogglebox – the series that films couples and families reacting to the week’s television programmes.

Gogglebox has been a surprise Channel 4 hit, winning a BAFTA and more than three-and-a-half million viewers. And now Giles and Mary have written a joint diary for the last year.

‘It’s like The Country Diary of an Edwardian Lady,’ says Mary.

‘Some of it’s dull as ditchwater,’ says Giles, who finishes Mary’s sentences with deadpan punchlines, and vice versa.

The diary deals with the humdrum issues of everyday life, like Giles’s lone shopping trips to Marlborough.

‘He often sneaks away without me,’ Mary says, ‘And I want to come.’

‘There are only so many car parking spaces in Marlborough,’ says Giles, ‘All she has to do is walk along, look for the Volvo and she’ll find it. I set her initiative tests by making her look for the car.’

The diary is just one pleasant after-effect of late-onset fame.

‘Since being on Gogglebox, our marriage has improved because we have time to talk to each other,’ says Mary, ‘Previously, I’d get up at five or six and he’d get up at ten.’

‘I do suffer from night terrors, having gone to bed having watched the horror channel,’ says Giles.

‘At one o’clock, he’d just be having breakfast,’ says Mary. ‘We didn’t overlap much. We’d have one waking hour in each other’s company.’

Now, thanks to Gogglebox, Giles and Mary spend six hours, from 6pm to midnight, twice a week, watching, and reacting to, pre-recorded television programmes. Two cameras sit on tripods just below their telly. One camera moves constantly to catch their facial expressions close up, while the other stays still. A four-man TV crew sit in the kitchen, operating the cameras.

‘Part of your brain can’t forget they’re next door,’ says Giles, ‘Sometimes, you can hear them laughing.’

Mary is less aware of the artifice.

‘I go into a kind of trance,’ she says, ‘I think, “We’ll be dead soon. I need the income stream.” What’s the point of being self-conscious?’

To begin with, Giles and Mary weren’t liked by the viewers.

‘There’s one particular person who describes us as Fred and Rosemary West,’ says Giles.

Gradually, they grew more popular, as viewers warmed to the new couple.

Giles and Mary have also worked out why people want to watch other people watching television.

‘It breeds a sense of national unity,’ says Mary, ‘When Naked Attraction [a dating show with naked people] was on last week, Gogglebox showed all the families recoiling in horror. The viewers feel relieved. They say, “Thank God, I’m not alone. Everyone else is shocked, too.”’

‘It’s a replacement family for people. They know we’ll be there on Friday at nine. And we’ll be watching telly just like them.’

Gogglebox has also been a financial boost – albeit a small one – for the two freelancers.

‘With uncertainty in the world from Brexit, it was quite a smart move for us,’ Giles says, ‘Journalism is uncertain; art is uncertain. This is something regular, which we’ve never had, really.’

The canny talent scouts at Gogglebox have also alighted on one of the funniest couples in Britain.

‘One of the best things about Gogglebox is that some clever editor has seen what makes them click as a couple,’ says Craig Brown, the writer and satirist who has been close friends of the couple for more than thirty years, ‘And so you get glimpses of them laughing very affectionately at or with each other.

‘The key thing about them is that they are both howlingly funny, in different ways. Giles presents a kind of parody of normality, and of received opinion, whereas Mary’s humour is more whimsical. They’re indispensable.’

Giles was born in Stoke-on-Trent in an undisclosed year – they both prefer not to give their ages. The family business, S.A. Wood and Sons, had been making tile fireplaces since the Victorian era. The business was sold, ‘to support my father’s lifestyle – and his mistress,’ says Giles.

He went to Shrewsbury School and then Wimbledon School of Art where, in 1980, he met Mary, a model at the school.

‘Not a nude model,’ Giles adds, ‘A costume model.’

They moved to their cottage, outside Pewsey, thirty years ago, and have two daughters, Freya, an artist, and Posy, a teacher. Mary was born in Larne, Northern Ireland, where her father was a doctor. She came to London, aged eighteen. She gradually moved into journalism, working with Craig Brown – ‘A key social springboard,’ she says – at Tatler, then edited by Mark Boxer.

In the late 1980s, Mary came up with a Tatler agony column – Candid Counsel. Rather than dealing with the usual agony material, like divorce and death, it confronted social conundrums such as forgetting the names of your dinner guests. In the early 1990s, the Spectator snapped up the column, renamed Dear Mary.

Spending a day with the couple is like attending a comic masterclass in irony, their different senses of humour neatly dovetailing. Craig Brown is experienced at diagnosing their characters.

‘Giles has what he calls his Encyclopedia of Mishap and Misery,’ says Craig, ‘He has an unfailing photographic memory for everything that has gone wrong in anyone’s life, particularly if he was the cause of it. He lives for Schadenfreude.’

‘One of Mary’s key characteristics is her mad character sketches, usually based on the principle of two plus two equals ninety-four. So she’ll say, “Poor Sally. She lost her ball on the beach when she was five-years-old and, thirty years later, her marriage ended in divorce,” or some such non sequitur.’

Giles and Mary like to say how much they annoy each other but, underneath, there is clear, deep, mutual love.

‘Giles says the chief reason not to divorce is for ecological reasons – you then have to have two houses,’ says Mary.

‘The Diary of Two Nobodies’ by Giles Wood and Mary Killen is published by Virgin Books (£14.99)

Jenny Bardwell - Reaching for the stars - in their dressing rooms

Farewell to the garden of a lifetime - Christian Lamb, 101