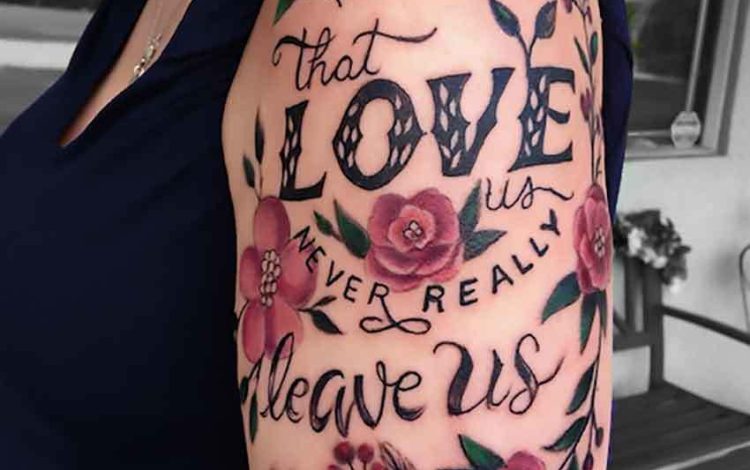 Cremation tattoos – when the ashes of a loved one (human or pet) are mixed in with the ink to create a memorial beneath the epidermis – are still quite rare.

Bubblegum Ink in Cheshire carries out three ‘inkings with ash’ every week, but at most other parlours there are fewer, ranging from six to 24 a year. Tattooists are freelancers, and you’ll often find in the same shop those happy to do cremation tattoos working alongside those who won’t. At Inkaholics, London, clients are asked to sign a consent form, acknowledging they are introducing a foreign substance into a sterile ink and do so at their own risk.

Others claim that health and safety concerns are misplaced. ‘Our bodies contain carbon; black ink is carbon,’ explains Alex at 1770 Tattoo in Brighton.

A typical procedure takes a tiny quantity of the finest ash particles and mixes them in with the pigment. ‘It’s a symbolic act,’ says Alex of 1770. ‘In reality the ash doesn’t enter the skin cell.’

At Bubblegum Ink, the ash is mechanically mixed so that its molecular size matches that of the ink and the mixture properly impregnates the skin. ‘If you can see your tattoo, you can see your loved one,’ Paul confirms.

Regarded by grieving customers as part of the healing process and a deeply personal and private act, a cremation tattoo is – like every other tattoo – a collaboration between the client and the artist, who interprets the client’s idea.

Popular images for friends and relatives include a pocket watch with a date or the replication of a credit-card signature; and for pets, paw prints and silhouettes.

Sometimes, the request is more unusual. ‘I once had a family of six, each wanting a witch on a broomstick, to commemorate a sister known as the Wicked Witch of the West,’ a tattooist at Gods of Ink in Gloucester tells me.

New technologies have led to ever more inventive ways of transforming mortal remains into mementos, from diamonds formed of human ash to pearls grown from the bone fragment of a beloved dog. Having recently lost my mother, I feel I carry enough memories and DNA not to need these external ornamentations, but this doesn’t prevent my being fascinated by conceptual tattoo projects focusing on a memento mori.

Sandra Minchin-Delohery – an artist whose father died from prostate cancer and a cancer survivor herself – decided to reproduce a painting, Vase of Flowers by Jan Davidsz de Heem, on her back. ‘As I decay, so the tattoo will decay,’ she says.

Some have gone one step further to achieve a strange kind of immortality by selling their tattoos while still alive. Tim Steiner sold his Wim Delvoye tattoo to an art collector for £130,000; when he dies, his skin will probably end up on a gallery wall. Cremation tattoos, like gravestones, can be forgotten in the course of time – as one tattooist admitted: ‘I’ve one for a friend on my body, but I can’t remember what it is now because I’m covered in them!’

What is the British Postmark Society?