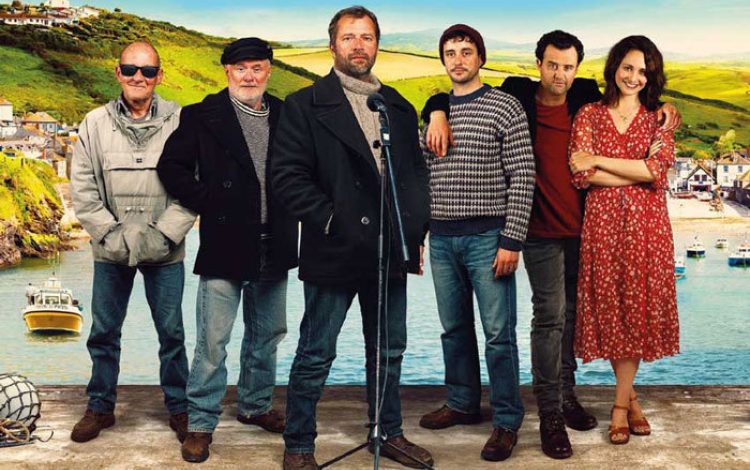 Once British films used to be actually about something. These days, more often than not, we are confronted with what might be called Tourist Board Kitsch.

Is it set in a beautiful coastal village full of lovable rustic rogues in thick sweaters? Can they do something wonderful that no one else can do? Is that a horrible yuppie driving down from London for a stag weekend, who sees what the rustic rogues can do and believes he can make a success out of them? Is there a beautiful local lass for him to fall in love with? Have we seen all this roughly 12,000 times before?

Fisherman’s Friends is ‘based on a true story’ about ten Cornish fishermen who recorded their sea shanties and became the most popular band in the world. U2 happily defer to them, and Coldplay make their breakfast.

Their leader is James Purefoy, who is posher than HM The Queen in real life but here puts on a convincing oo-arr accent. Daniel Mays is the horrible yuppie manager who becomes the band’s champion and finds redemption in the arms of Tuppence Middleton, who is a sad young woman with a daughter but wears prettier and prettier dresses as the film wears on. David Hayman, whose Geordie accent manifests itself only very occasionally, is the twinkle-eyed old geezer of the team, and so on and so forth.

It’s all set in Port Isaac in Cornwall, which is so lovely that I imagine very few locals can afford to live there any more, but there are no incomers at all — none — and the local pub doesn’t serve lager. Perish the thought! You almost expect Maggie Steed, as the pub’s landlady, to say, ‘There’s no call for it round here,’ and it’s only by our greatest good fortune that she doesn’t.

The fishermen are talented – there’s no question about that – but Mays’s even more horrible, BMW-driving workmates do not believe they are commercially viable. So they go out of their way to sabotage his deal and the band’s career. ‘Heh! Heh! Heh!’ they cackle, twirling invisible panto-villain moustaches.

Helicopters sweep across the bay, showing us repeatedly how scenic it all is, while subplots boil and bubble. The actors, actually, aren’t bad at all. Purefoy has grown into his formerly pretty-boy looks, Tuppence Middleton is a proper talent, and even Mays isn’t bad, although most of his lines are.

No cliché of this genre has been rejected: when someone gives a speech in the boozer about how much he loves them all, you know for certain that he is about to pop his clogs. And he does. Death for him, and indeed for us, seems like a release. Fortunately, I was the only person in the cinema, which enabled me to scream, ‘I hate this film!’, from time to time without fear of ejection or arrest.

What happened to Westerns? The Sisters Brothers is directed by a Frenchman, Jacques Audriard, and stars Joaquin Phoenix and John C Reilly as a pair of assassin brothers in Oregon in 1851 sent to torture and kill some malefactor somewhere. Phoenix is the obvious psychopath of the pair, and Reilly is the sensible older brother who looks after him.

Needless to say, everything goes terribly wrong. Beautifully shot, with an eye for landscape that will make any photographer purr, the film is nonetheless relentlessly grim, bleak, brutal and violent. In fact, it’s less of a film than an extended Gallic shrug at the meaninglessness of life.

By the way, both of these films are way too long. Longer than long. Longest, possibly.