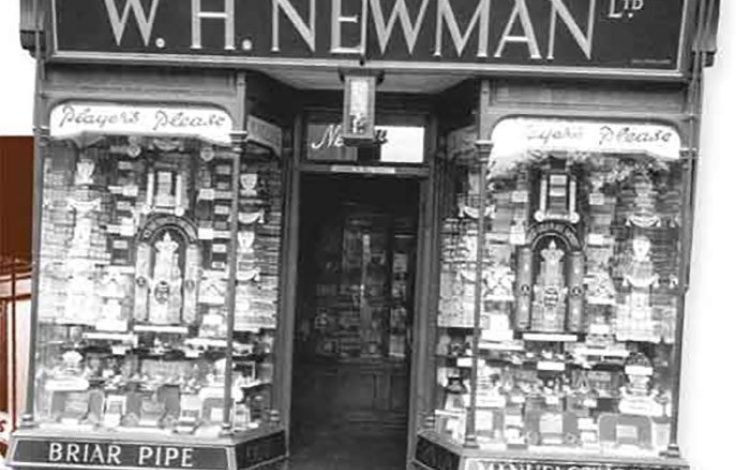 Stubbed out: shop in Leamington Spa
View Full Size
1
of 1

Joseph Connolly remembers the understated opulence of the tobacconists' frontages, surmounted by fasciae of brass, or gilded lettering encased in glass

Of all the lovely and lost high-street shops, the tobacconist was possibly the noblest and most beautiful.

In a world where even the word ‘tobacconist’ is never spoken, only oldies will remember the understated opulence of their frontages, surmounted by fasciae of brass, or gilded lettering encased in glass.

Every town and city boasted a few, though today, even in London, I can conjure up the image of hardly half a dozen. While many were family concerns, most were part of either the Finlays chain (ubiquitous on railway concourses) or the rather grander House of Bewlay. One recalls with joy those cobalt-blue, ceramic tobacco jars in the window, emblazoned with the name on a golden swag.

One entered a tobacconist in a state of awe – the carved and gleaming mahogany fixtures crammed with wooden boxes of Havana cigars, tobacco tins, pipes and the more glamorous brands of cigarettes. The great cigar names still prevail – Partagas, Upmann, Montecristo, Romeo y Julieta – and the packaging has barely altered.

But so many cigarette brands have long ago fallen – Woodbine, Olivier (named after the actor), Capstan, Three Castles, Kensitas, du Maurier – in the elegant art-deco pack – and Passing Clouds (pink, and with a cavalier).

As for pipes, well – when did you last see anyone smoking a pipe? Probably in a Talking Pictures film. Dunhill was the pre-eminent make, with its discreet and famous white-spot trademark.

Within the hushed and panelled interiors, the true glories were revealed: that gorgeous aroma – the richness of Dundee cake, Christmas pudding, a touch of Earl Grey and even incense.

There was loose tobacco in jars, sunken into the counter, in addition to all the stunningly decorative tins: Baby’s Bottom remains in the mind, along with Gold Block, Bondman, Parsons’ Pleasure and Three Nuns (these last two quite possibly connected). Snuff was an exotic mystery all of its own.

I remember a slim brass tube arching elegantly, a permanent blue flame at its tip: one leant towards it to light one’s cigar.

Most people would buy their fix from the trusty corner newsagent – a fabulous sight in itself, plastered in placards and enamel swing signs for such as Wills’s Gold Flake, Senior Service or Player’s (please).

When the shop was closed, there was always the cigarette machine outside – as there was on Tube and railway platforms, and in every bar and café: it was always something of a thrill to insert one’s coins, tug the drawer and wonder whether anything would be in it.

In this age of virtual prohibition, where a packet of 20 is alive with photographs of diseased organs and costs about 13 quid, all the past beauty of signs, tins and packets is left to the collectors of vintage tobacciana.

As for the tobacconists themselves, well … they have, alas, just gone up in smoke.