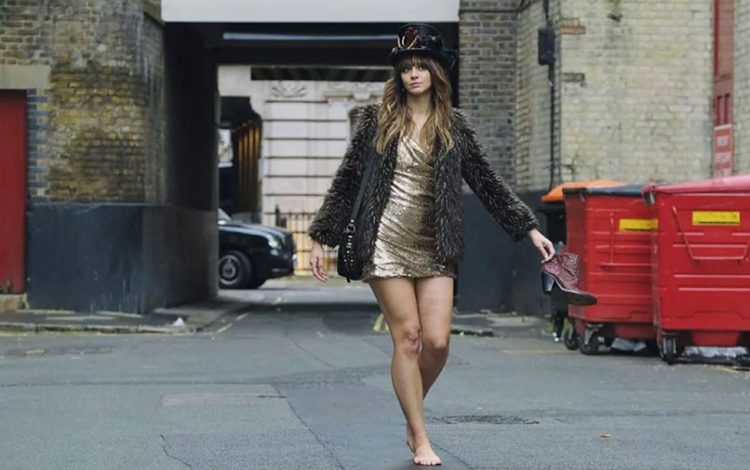 Footloose: Maggie (Emma Appleton) in Everything I Know About Love
View Full Size
1
of 1

Frances Wilson has been observing the mating rituals of female millennials, with the aim of explaining to Oldie-readers the current understanding of, to quote Prince Charles, ‘whatever love means’.

I have been observing the mating rituals of female millennials, with the aim of explaining to Oldie-readers the current understanding of, to quote Prince Charles, ‘whatever love means’.

Everything I Know About Love (BBC1) began as a bestselling memoir by the Sunday Times agony aunt Dolly Alderton, who then loosely adapted it for this seven-part series.

It is billed as a ‘Sex and the City for millennials which covers bad dates and squalid flat-shares, heartaches and humiliations, and, most importantly, unbreakable female friendships’. It’s about 24-year-old Maggie (Emma Appleton) and her childhood best friend Birdy (Bel Powley). They move to Camden Town with two other girls from ‘uni’.

Maggie, based on Alderton, is ‘fun’ and tall, while Birdy is sensible and small. Birdy is also, it’s important to stress, utterly charming and Bel Powley, with her huge honest eyes, single-handedly carries the show because no one else can act.

Propelled by the pleasure principle, the flatmates drink vodka shots, get dressed up, dance for joy in their bedrooms, walk down the middle of the road linking arms, drink cocktails, go clubbing on weeknights, hug, snort cocaine, practise dance routines, play drinking games, crowd onto the sofa to watch a reality-TV show called Heirs and Graces (based on Made in Chelsea) and reflect on the progress of their lives.

Once, when she is home alone, Maggie dances around wearing nothing but a thong. The ‘squalid flat share’ is in fact a brand-new house where each girl has her own double bed and Maggie has enough wardrobe space for her vast collection of sixties-style coats, hats, knee-high boots and miniskirts.

I couldn’t find the promised ‘heartaches’ and ‘humiliations’. Instead, Maggie gets everything she wants without disturbing so much as a hair on her lovely head.

First, she falls for a musician called Street whom she meets on a train. She trusts in fate that they will meet again and she duly runs into him in the local pub. Then her landlady, who turns out to be the director of Heirs and Graces, offers Maggie a position as the show’s story producer.

Where was the story producer in Everything I Know? The narrative is less of an arc than a plateau. Maggie goes out with Street until she dumps him, and Birdy meets an Australian called Nathan. In one episode, Maggie doesn’t drink. In another, she drinks for two days and two nights solid.

It has to be one or the other, and boys come first. The ‘unbreakable female friendships’ end up as broken as a pile of smashed plates.

So baffled was I by the shallowness of all this that I watched the whole thing again to check that I hadn’t missed the millennial wisdom. But no. A feeble attempt to cash in on the success of Fleabag and Girls, Everything I Know has nothing whatever to report – other than that 20-somethings are as self-absorbed as they always were and always will be.

Meanwhile, things are hotting up on Love Island (ITV3). Unperturbed by the suicide of two former contestants and the presenter, Caroline Flack, the knocking shop is into its eighth season. Five girls in itsy-bitsy teeny-weeny high-thigh bikinis and five guys with abs, pecs and arms covered in tats look for love in a Big Brother-style house in Mallorca. ‘I feel like my head’s literally split in half,’ Tasha confides to the camera. ‘It’s like AAGGHH! Andrew is giving me good energy, Kurt seems sweet, Liam is 100 per cent and I’m getting great vibes from Davide. But I’m not getting much graft.’

Grafting, in the Island lexicon, means working hard to get the attention of your love interest. Similarly, ‘melt’ is used as a noun, meaning pathetic, and to ‘get pied’ is to be rejected. My money’s on Gemma, who does dressage for a living, coupling up with Davide, the Italian stallion who wears mirror sunglasses in bed. They’ve had a deep conversation and agreed that attraction is important in a relationship.

Which is probably all we need to know about love.