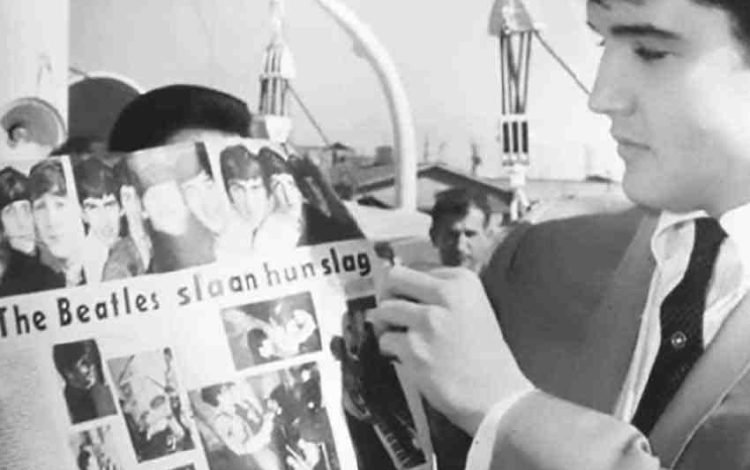 Come together: Elvis with a Beatles article in 1965
View Full Size
1
of 1

Today in 1965, Elvis met the Beatles for the first and only time. By Craig Brown

Fifty-six years ago, on 27th August 1965, Elvis met the Beatles at his Beverly Hills home.

‘Her black bouffant towered above her head and she was heavily made up with thick black mascara, midnight-blue eyeliner, red blusher and Heartbreak Pink lipstick,’ noted Chris Hutchins from the NME, who was also there.

For a few seconds, silence falls as the English and American gangs face each other. Priscilla Presley senses their nervousness: ‘You could hear a pin drop when they walked in. I was amazed at how shy they were; they were speechless, totally speechless, truly like kids, meeting their idol. Especially John – John was shy, timid, looking at him. I mean, I really believe he just couldn’t believe he was actually there with Elvis.’

Priscilla finds the atmosphere ‘a little bit awkward because they kept looking at him, not really saying anything and not really sitting down, just staring at him’. She remembers Elvis saying, ‘Guys, if you’re gonna just stand around and stare at me, I may as well do my own thing.’ He sits down, and the Beatles sit cross-legged on the floor around him.

‘A chair for Mr Epstein,’ says the Colonel, his manager, and people rush forward with a selection of them.

They talk about touring; Epstein tells Elvis about their plane catching fire on their flight to Portland on Monday. Elvis says one of his aircraft engines once gave out over Atlanta. The two managers huddle in a corner; Epstein is keen to organise UK concert dates for Elvis, but the Colonel has a rule not to mix business with pleasure. Instead, he announces to the room, ‘Ladies and gentlemen, Elvis’s private casino is now open for your pleasure. Brian, let’s play roulette.’

Elvis calls for more guitars for the Beatles, and they join in. Paul chats to him about playing bass. Conversation is a little desultory, until John sharpens it up.

‘Why have you dropped the old rock stuff?’ he asks Elvis, adding that he loved his early records, but hasn’t liked the more recent ones.

Elvis is nonplussed: he has grown accustomed to everyone telling him what he wants to hear. Later, John says he spotted a slogan saying ‘All the Way with LBJ’. John regards LBJ as a warmonger. Did this prompt his put-down of Elvis?

They all go back to their jamming; this time I Feel Fine. Ringo has no drums, and feels underused drumming on a table with his fingers, so he drifts off to play pool with the roadies.

John puts on a comical Clouseau voice, saying, ‘Zis is ze way it should be ... ze small homely gathering wiz a few friends and a leetle music.’

Elvis looks baffled. After a while, the songs run dry and they all join the others in the games room. John is amused by the Colonel’s swashbuckling stories of his early life as a carnival showman: how he wrestled with a lion; how the dancing chickens danced only when he placed them on an electric plate.

‘He’s an amazing character, a real hustling showman,’ John tells Hutchins later. ‘But Elvis – what a total anticlimax HE was. He seemed to be completely out of his head. He was either on pills or on dope ... whatever it was, he was totally uninterested and uncommunicative.’

Colonel Parker signals the end of the party by handing out presents of Elvis records to one and all. He gives the four Beatles little covered wagons that light up when you push a button. He tells Epstein he is going to buy him a cocktail cabinet. Epstein says he will ask Harrods to send the Colonel a Shetland pony – a memento of his circus days.

As they are ushered out, Elvis says, ‘Don’t forget to come and see us again in Memphis if you’re ever in Tennessee.’

Still adopting a comical voice, John shouts back, ‘Zanks for ze music, Elvis! Long live ze King!’ Then he asks Elvis to join the Beatles at their place in Benedict Canyon the following night.

‘Well, I’ll see. I’m not sure whether I’ll be able to make it,’ replies Elvis. On the way back, John describes the party as a total non-event: ‘I can’t decide who’s more full of shit: me or Elvis Presley.’

Once the Beatles are safely out of sight, Elvis goes back into the house and draws Larry Geller to one side. What really blew his mind, he says, is the state of their teeth. He can’t understand why, with all their money, they haven’t had them fixed.