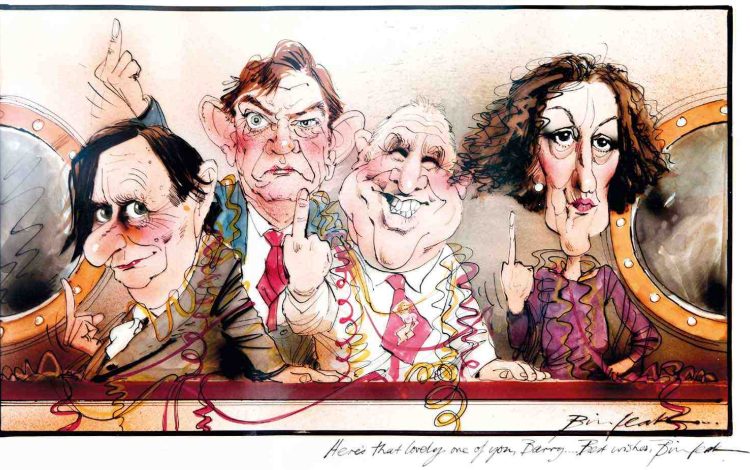 A wave of brilliant Australians came to Britain sixty years ago. They included Clive James, Germaine Greer – and Barry Humphries

‘We’re going overseas,’ announced Ada Scott, my mother’s friend. ‘After that, we might pop over to some of the clean countries.’

By ‘overseas’, Ada meant what we all meant: England. My grandparents called it ‘going home’ and, in the Melbourne of that epoch, it was an inevitable destination, to which we swam like spawning salmon.

The ‘clean countries’ were nowhere near the Mediterranean, of course, and were probably places like Denmark, Holland and Switzerland. Dorothy Wilmot, my mother’s dressmaker, said that she had found Sweden ‘spotless’, and the Swedes – just like the Wilmots – ‘very particular’.

Before I boarded an Italian ship in Melbourne bound for the Old Country, in 1959, I had a romantic view of my destination. In my early years, my picture of England was inspired by all those books from Odhams Press with titles like Lovely Britain and Wonderful Britain.

There was a whole shelf-ful of these illustrated volumes published during the Second World War to encourage patriotism, especially in the far reaches of the Empire where we lived.

We were totally deprived of the thing that England had in such abundance and which Hitler threatened: quaintness. The only thatched cottage we could cherish was our magnificent Staffordshire thatched-cottage teapot, and matching cup and saucer, which, after becoming slightly chipped, ended up in the gardener’s shed.

We could remotely assert our allegiance to Albion with a Winston Churchill calendar behind the kitchen door, and an Edward VIII souvenir Coronation mug – brought back on the boat by my grandparents who were due to attend that ill-starred event – but we were quaintness-starved.

To this day, you’d be wasting your time visiting Australia on a quaintness quest.

In my early twenties, when I was assiduously acquiring habits of intemperance, I anticipated the delights of London pubs. How charming they must be, I thought, compared with the licensed urinals of Melbourne and Sydney, tiled and reeking of disinfectant.

Reading the ‘smart’ fiction of authors like Michael Arlen and Beverly Nichols, I imagined the pubs and cocktail bars of Mayfair – and when I finally got there, they did not disappoint. It took at least ten years for me to see beyond the quaintness and its sister virtue, charm, to the execrably filthy carpet.

I had to live in the cheapest area of central London, to audition for acting jobs, and do the night shift in Wall’s ice-cream factory, Acton, Raspberry Ripple department, so obviously I was obliged to live in inexpensive Notting Hill Gate.

My lodgings were cheap, for I had found a seedy basement flat next to the underground station, and I felt like a character in a book by Patrick Hamilton.

We had a lodger whom my then wife and I rarely saw. Alan Beale was a dancer in the Royal Ballet we’d met in Melbourne. He owned a small rust-bucket of a car. We never saw his car because he’d lent it to an Australian art critic called Robert Hughes, who had newly arrived in pursuit of a pretty young ballet dancer.

Hughes would go on to write that brilliant account of Australia’s convict past The Fatal Shore, and become the most famous art critic in the world, whose rare plagiarisms were encrypted in a racy prose.

As art critic on Time magazine, he invented a unique language to describe contemporary art: he had the ability to be eloquent about nothing. Hughes was a ‘card’; he borrowed Alan’s car permanently and married a recovering nymphomaniac.

In London back then, most people seemed to have an Australian dentist. They had come over in the fifties to fill the carious gnashers of the poor old Poms and rip off the National Health.

When the Arabs started to arrive in the sixties, the dentists invented the ‘Australian trench’. They merely ran the drill round the teeth of the sedated sheikh in a neat horseshoe top and bottom. Then they filled them with gold and capped the lot. They would last until the patient got back to Jordan – not before he had paid for his dazzling smile in cash. Craig, the dentist, then billed the health system.

All the Australian dentists belonged to a flying club and had villas in Spain, so the Arab loot would wing its way to safety in Majorca most weekends.

In January 1961, Robert Hughes and Bryan Robertson mounted a major exhibition of Recent Australian Painting at the Whitechapel Gallery, which introduced its visitors to the work of Arthur Boyd and Brett Whiteley. Later, Francis Bacon gave a dinner for the artists at the Café Royal – and Sidney Nolan, already a celebrated and successful expatriate painter, was also present.

When Nolan left early to get to his house in fogbound Putney, another Aussie artist and a Stranger to Fame leant towards me and said, ‘There goes Bootsie Nolan.’

‘Why “Bootsie”?’ I naturally enquired.

‘Because, mate,’ my neighbour snarled, ‘he’s so far up Kenneth Clarke’s arse, all you can see is his boots!’

It was not a notably gracious observation, but it was unfortunately typical of my countrymen’s response to a successful colleague.

The next arrivals had all been students at Sydney University: Bruce Beresford, Clive James and Germaine Greer. Germaine was the only one I knew, having been impressed by her in 1958 when she came down to Melbourne and helped me display one of my Dada exhibitions. These were exercises in outrage intended to affront the respectable citizens of Melbourne, and they did.

Even then, Germaine was a striking and attractive girl in a short, blue shift and black stockings. She was the first woman in Australia to wear them, and Germaine was already far too bright for the hayseed Bohemians who fawned on her in that far-off time. Little more than a decade later, Germaine was world famous.

Bruce Beresford, now my closest friend, became the director of three Oscar-winning films and has made over 30 pictures, many of which he wrote.

Applauded in Europe and America, he has, as might be expected, earned less acclaim in Australia. He directed two magnificent movies in the early seventies based on the scabrous comic strip Barry McKenzie, which first appeared in Private Eye in 1964. These set a benchmark in subtle humour as yet unrivalled.

Bruce’s friend Clive James, who died in 2019, became a prolific critic, author and poet. When I first met him at Cambridge in the sixties, I marvelled at his library which contained, among other treasures, F Scott Fitzgerald’s The Crack-Up in its original serial form in Esquire magazine, 1936.

He went on to become a television star, and a fine poet. He saw himself as a multilingual Lothario, though no one I know ever heard him converse in anything other than a cultivated Strine. Yet, in spite of his prolific literary output, Clive always found time to encourage and nurture attractive young poetesses, who would all vouch for his tenacity.

I have not mentioned the myriad actors, sportsmen, sopranos, directors, racehorses and authors who have come to the UK and revitalised your decadent and flaccid culture.

Our greatest novelist, Patrick White, having spent much of his life in Europe, came back to Sydney in 1956 and became an avid nationalist.

One day, in my presence, Patrick, un homme très difficile, was fulminating (he often fulminated) against a gifted actress who had gone to Canada.

‘Why couldn’t she stay in Australia?’ the great writer fumed.

‘But, Patrick,’ his Greek companion Manoly protested, ‘you know you hate Orsraylia!