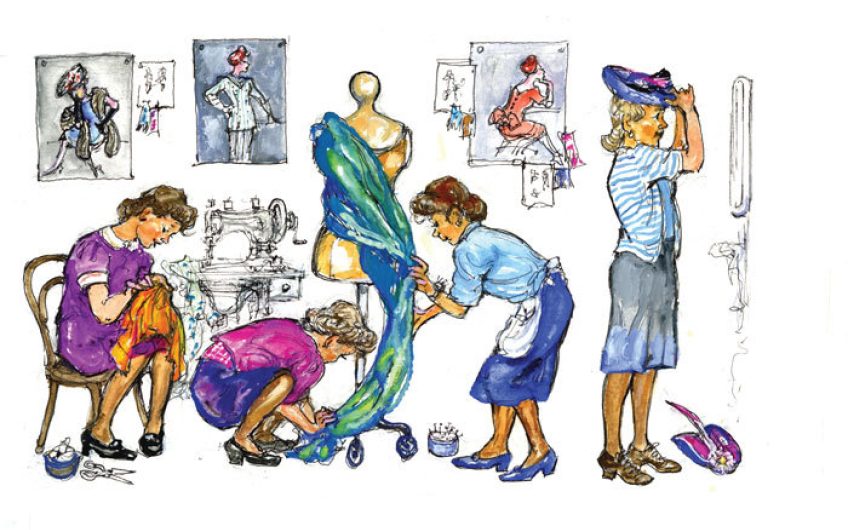 When I was about eight years old, a young woman with artistic leanings who

lived locally came to our house once a week to give me art lessons. These consisted of her setting up an apple, an orange and perhaps a bunch of grapes and sitting around with a cigarette while I applied myself with my box of watercolours. It was particularly important to be neat and not go over the pencil lines. This bored me stiff. I much preferred cutting out paper dolls and designing their party dresses.

Later, at the High School, we did Art once a week. Our teacher was skeletal Miss Griffiths, who wore hand-embroidered smocks and was a nervous wreck. She set up still life subjects (more fruit and flowers) and also tried to encourage us to do imaginary landscapes, woodlands in autumn, or garden scenes. Sadly for her, the majority of the class had long since given up on Art, and regarded this as a more or less free period in which they dabbed about in a desultory way with a paintbrush while exchanging the latest gossip.

I left school as soon as I could and went to Liverpool Art School to study dress design and fashion drawing,

travelling in daily from home on the train. It was a revelation. The school then was divided into ‘Fine Art’ and ‘Commercial Art’ (there was no course in book illustration). There were day-release courses for the boys from the Liverpool Institute School next door – the grammar school my father had once attended, as did, at a much later period, Paul McCartney. There was a future then for a bright lad with a good grounding in technical draughtsmanship as an apprentice in the Cammell Laird shipyards in Birkenhead. Good prospects, too, for commercial artists.

The boys – they were nearly all boys – in the full-time commercial art studio exuded a sense of purpose. They were Mad Men in the making. Their carefully parted, Brylcreemed hair and the shadow of an Errol Flynn moustache already struggling on the upper lip seemed to pre-empt the possibility of one day actually commanding a decent wage. Some even sported those elastic garters which hold up the shirt sleeves to prevent them from getting soiled. They were nonchalantly adept at stretching a sheet of wet double-elephant watercolour paper on a huge drawing board, sticking down the edges with tape so that it dried into a taut, pristine surface, then applying an impeccably shaded watercolour wash – this was long before the arrival of the airbrush, let alone the computer – without leaving a single tidemark. They were equally at home with poster colour, touching in the highlights with fine brushes, all the while keeping up the flow of wisecracks and doing passable imitations of Bob Hope in the ‘Road’ movies.

A large proportion of advertising then was painted rather than photographic; movie posters, dramatically lit, with the stars highly recognisable, magazine and newspaper advertisements of all kinds, huge billboards, painted in sections and assembled on site, small billboards for shops and restaurants. This was an era when smoking was sexy. Images of lantern-jawed men wearing stylish trilby hats and gripping pipes, and glamorous women flaunting long cigarette holders, loomed up everywhere. The skill of a sign-writer at work used to stop me in my tracks. To watch one knocking in the lettering freehand, exactly filling the available space, then painting in the characters with a steady meticulous hand resting on a mahlstick, is like watching a magician at work. How sad that it is now a lost art.

The dress design and fashion drawing department was all girls. We may have lacked some of the casual aplomb which the boys seemed to possess, but we were very determined. We learned how to cut out all types of dress materials and how to make our own patterns; we struggled to get to grips with insets and skirts cut on the bias. We constructed outlandish hats out of moulded felt. In this period of wartime austerity dress materials were hard to obtain, and clothes were rationed.

I managed to come by some green felt which was intended for billiard tables and made a skirt out of it. This was moderately successful, except that any bits of fluff or scraps of paper that happened to be lying about, including my own pencil sharpenings, tended to stick to it.

My favourite part of the course was fashion drawing. There was plenty of it around then, before photography dominated. It ranged from the lowly end of mail-order catalogues and local newspaper ads to the dazzling heights of the front cover of Vogue. We studied the styles of the great virtuosos like Gertrude Ettlinger or Frances Marshall who conjured up a wonderful world of women in ball dresses or Ascot hats escorted by dashing men, or in boxes at the theatre, as in Harold Foster’s Black Magic chocolate ads. These, along with the drawings in American magazines of coolly elegant Katharine Hepburn-style women displaying immaculate sportswear, represented something even more wildly inaccessible to us than supermodels do to teenagers today.

Regular attendance at life classes was central then to every discipline. We made still life paintings and drapery studies. And we set out with the sketchbooks to Bidston Hill, above Birkenhead, to draw the last remaining group of farm buildings which had not yet been engulfed by suburban development. Perhaps if we had turned our eyes the other way towards the shipyards below, the docks and cranes which lined the Mersey, it might have been a more interesting study. But instead we directed ourselves to a group of collapsing barns pretending that we were in the heart of the Suffolk countryside.

I spent only a year at Liverpool Art School. The teaching I had there was a foundation in the very real sense, something to build on. The act of drawing every day, however inept and disappointing the results, took root; a habit, an addiction, a counterpoint to life which, once established, is difficult to break. My drawings had started to reflect some measure of maturity. But probably ill advisedly, I decided to move on.

I wanted to leave home, get out of our sedate suburb and see the world. So I enrolled at the Ruskin School of Fine Art, Oxford. I chose Oxford because I had heard that there was an ice-skating rink there. I had always rather fancied myself spinning about on ice. As it turned out, there was no ice-skating rink. But other interesting experiences were in store there. And that, as they say, is another story.