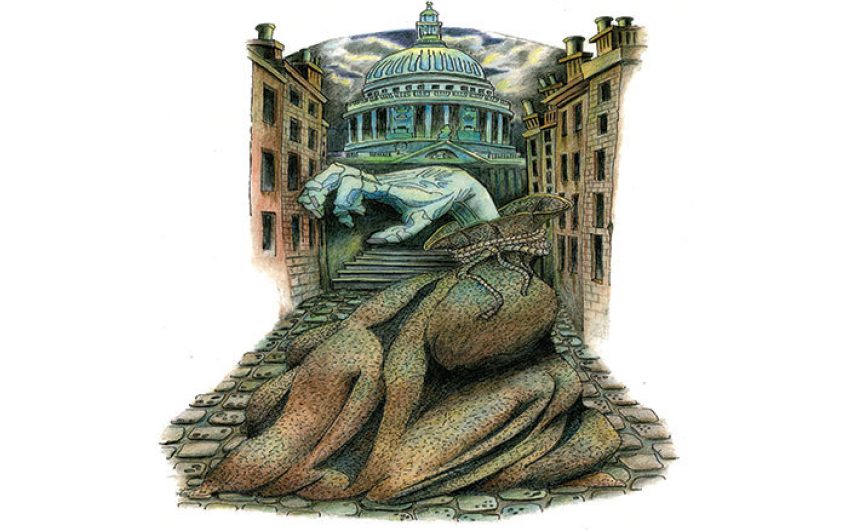 Hanging Sword Alley no longer exists. It was obliterated by office development in the 1970s. But for hundreds of years before that it ran, straight and narrow and steeply climbing, between the lower end of Whitefriars Street, where the Daily Mail offices stood, and Fleet Street, by way of Salisbury Square. The Alley street sign hung above a flight of steps that led to it, beside a pub called The Harrow, much patronised by Mail journalists. From the steps it ran between the tall walls of Victorian printing shops or blackened warehouses. Here and there was a recessed entrance, a doorway with a couple of steps.

I only walked along the alley at night. It was a shortcut from the pub, where my wife Patricia and I sometimes spent the supper break from the night production shift, to Fleet Street, where we worked. One night we cut through the alley: it was dark, empty and felt vaguely disquieting, but we were late and it would save time. There was absolutely no sign of life ahead of us. Both of us stopped dead at the same moment and froze. My spine and neck clenched as if seized by a claw. Slowly we looked round. In an entrance we had just passed, on a step, someone had left a large bulging sack. Neither of us had noticed it as we passed. It could have been one of those sacks of waste paper commonly seen around printing works. But sticking out of the neck of the sack was a hand. It was a large human hand, spread out and catching the light from a single street-lamp.

I was not keen to investigate but I felt compelled to step back a few paces and draw level with it. It was definitely a hand, not a glove, emerging from the sack at waist height. The skin texture, the veins, knuckles, even the pores stood out, illuminated in extreme clarity. I wanted to touch it but couldn’t bring myself to. After some moments’ scrutiny I backed away to where Patricia was standing, transfixed. ‘It’s a hand,’ I said unnecessarily. But whose? The sack was quite large enough for a body to be stuffed in it. Without another word we hastened nervously on up the alley to the lights of Fleet Street.

The hand belonged to a body, we felt certain. ‘Phone the police,’ she said. ‘I don’t know what it is – I’d better go back for another look.’ ‘Don’t,’ she said, but I did. I re-entered Hanging Sword Alley, treading on needles. I searched for the doorway. The only entrance I could see looked somehow different. It was in the same place but there was no sack, no hand, nothing and nobody in sight. How can you report a body that is no longer there? Had it ever been there? I might have doubted this but two of us had seen it and felt the same nervous shock at the moment we did so. The unusual clarity with which the hand had impressed itself, coupled with its equally sudden disappearance, made me suspicious. Only a couple of minutes had elapsed before I revisited the spot, and there was nowhere along the alley where it could easily have been concealed. The doorway I was looking at was locked, dusty and neglected. Could we have experienced a time-slip? Could the sack have materialised from another century? But why, and why there?

It was forty years later that I discovered, at least, why there. A friend to whom I was telling the story said sharply: ‘Hanging Sword Alley? But that’s in Dickens!’ And so it is, in A Tale of Two Cities, although I had never made the connection. It was where Jerry Cruncher lodged. Besides being the doorman of Tellson’s Bank in Fleet Street, Jerry Cruncher pursues a secret off-duty hobby. He is a body-snatcher who goes out ‘fishing’ at night for newly buried corpses. Dickens chose Hanging Sword Alley with good reason. In 1775, when the story is set, the alley was the centre of the ‘Resurrectionist’ trade. There was a brisk demand for corpses in the City of London for anatomical dissection in the medical schools. A newly exhumed corpse would fetch twenty guineas. Body snatchers would haul them across London if necessary to find the highest bidder.

Not all the corpses had been exhumed. The alleys between Fleet Street and the River Thames were the haunt of criminals, thieves and cutpurses. Their technique was to accost strangers in Fleet Street, lure them to their lodgings with the promise of drink or women, rob them and in some cases knife them for their value as anatomical specimens. Dickens could not have picked a better spot for finding bodies in. And nor could I.

In the Sixties the Maharishi Mahesh Yogi arrived in Britain. He had come from the Himalayas to offer us Transcendental Meditation and the attainment of personal bliss: ‘bliss consciousness’. Like thousands of others, I was intrigued.

I went to visit the Nash house in Regent’s Park where he based his Spiritual Regeneration Movement. The house was humming with candidates for spiritual regeneration, some of them sitting in states of what looked like shock. It was explained that they were attempting to enter the trance-like state of bliss consciousness. The Maharishi’s entourage rushed about looking tense and purposeful, as if bliss were the last thing they were capable of.

But when I entered his presence the guru himself radiated geniality and joie de vivre. He was seated as usual on a goatskin (‘to prevent chill’). Stroking the stems of a bunch of fragrant freesias, he assured me he was very often in states of bliss. He offered to initiate me next day. Would there be a fee? ‘Bring no money but flowers and clean handkerchief.’ I took both – and Patricia, so that we could compare notes afterwards. He confided to each of us separately the mantra we were to repeat over and over to induce the meditative state. One’s mantra was personal and must not be revealed to another living soul. ‘Mantra has no meaning. Just as well repeat “Tick-tock”. But same mantra does not suit all personalities.’ Mine was the name of a Hindu deity and I suspect that a few names taken from the Hindu god catalogue served many thousands of disciples. We were told to work on the technique regularly for a week before coming back for further instruction.

Late that night when all was silent we tried mantra meditation, doubting that it would lead to anything. It didn’t to begin with. After twenty minutes I was thoroughly bored although peaceful – both my breathing and my pulse had slowed. Then something like a distant boom vibrated softly inside my skull. My mind seemed to lift and float away out of my control. All bodily sensation drained away. My legs were weightless, as if hollow. My clothes made no impression on the body inside them. As the floating continued I became sharply conscious of the ticking of the alarm clock which I had left in the next room, timed to go off after half an hour. I could hear human voices and footsteps from outside the window, although there was nothing there but our silent garden.

The trance-like state was weakening and I reinforced it by repeating the mantra. Almost at once I began to feel that I was travelling horizontally and effortlessly on my back, as if borne up in water. Even when the alarm clock sounded, the floating sensation persisted. When Patricia retrieved the alarm and switched on the light I remained motionless, as if paralysed. ‘Time to wake up!’ I opened my eyes but could not speak for a while.

In the early 1970s the world was intrigued by Uri Geller, a remarkable young psychic from Israel who could bend spoons by merely stroking them. This was a new phenomenon. Not only did he bend spoons and metal before the viewers’ eyes, he had dramatic effects on clocks and watches throughout the land: stopping some dead and restarting others which had been dead for years. What kind of force or influence was he transmitting through our screens?

I decided to go paranormal-hunting with Mr Geller and presented myself at his London hotel room armed with a sturdy teaspoon – but he was unable to bend it. He was having a bad psi day.

The experience did not make a sceptic of me. I have no doubt that Uri Geller genuinely bent spoons galore in favourable circumstances, because in favourable circumstances, I discovered, I could do it too. I found this out in the company of forty-odd parapsychologists from both sides of the Atlantic gathered for a conference at Trinity College, Cambridge. On the last afternoon the younger members of the American Parapsychology Association announced they were giving a party that night in a room above the college dining hall and we should all collect spoons from there on our way up. We stood about rather self-consciously, holding drinks in one hand and spoons or forks in the other. ‘All you gotta do is relax!’ we were told. ‘Act like it’s a normal party. If anyone’s spoon bends, raise an arm and shout.’ Ten minutes or so later there was a scream from a woman waving her spoon aloft. Soon there was another call, and another. ‘I’ve got PK!’ yelled an exultant American academic.

Suddenly PK (psycho-kinesis, the power of mind to move matter) was busting out all over. With joyful cries people were showing each other their contorted, corkscrewed cutlery. I had almost forgotten I was holding mine when I felt its stem give way, as if it suddenly felt tired. With no help from me the spoon handle had looped the loop, rolling itself into a neat little ring too small for my finger to fit into it. Another spoon I had went the same way, so did the copper bracelet I took from my wrist. Everyone assured each other that they hadn’t cheated. There was no need to – and what would have been the point?

Our ‘window’ lasted about half an hour. We ran out of things to bend. Even knife blades had parted from their handles. By the time the party broke up thirty-something out of about forty people present had watched their cutlery bend unaided – a success rate unimaginable in a laboratory. What had been going on? Clearly certain helpful conditions had been present. We had group cohesion, from having shared in the conference over three days. We were tuned to the same aim, the pursuit of psi. We had relaxed and treated the occasion like a children’s party game, some sitting in circles on the floor shouting ‘bend!’ Whatever energy these conditions released came from a collective circle of human minds. How this could affect the rigidity of metal or the stasis of matter I could not and cannot explain.