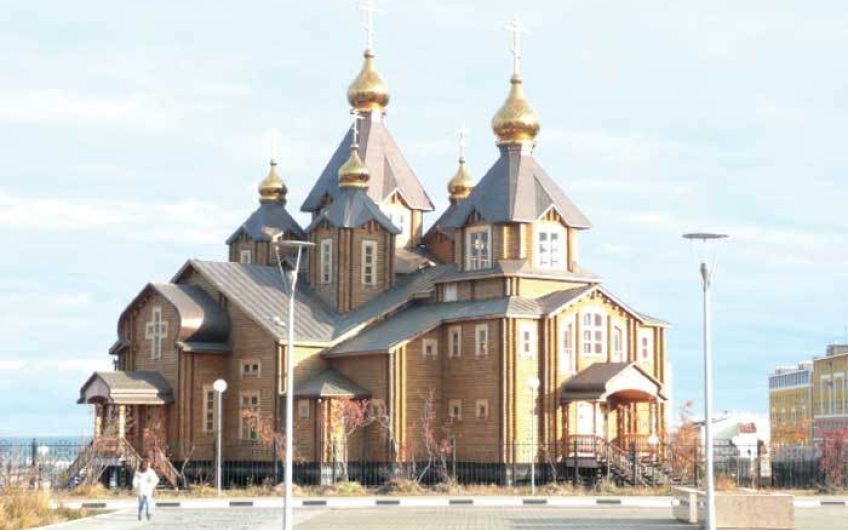 When I arrived at my homestay in Anadyr, the capital of Chukotka in the Russian Far East, my landlords, Sasha and Marina, were hunched over the kitchen table, each using a teaspoon to tease individual salmon eggs from a roe. Once they had amassed a batch of the gelatinous orange spheres, they sealed them in jars. The rest of the salmon poked out of a bucket in the sink. When I woke the next morning, they were still at it, though a badminton racket had been pressed into service. Sasha was gently rubbing a fresh block of roe over the strings so the eggs fell onto a plate. It was less labour-intensive than the teaspoon method. Where had the badminton racket come from? Possibly a landfill site, as it had already reached a scientifically interesting stage of decomposition. The eggs were delicious.

A region larger than France, Chukotka is eight time zones from Moscow and has no roads outside the capital. But it is within sight of Alaska, as Sarah Palin memorably reminded the electorate during the doomed 2008 Republican campaign.

Anadyr gave the sense of a being half evolved – out of the water, but short of the dunes. All 15,000 residents lived in the five-storey ‘Khrushchevka’ apartment blocks indigenous to the Russian north, and the stairwells smelt of urine, but the 200-foot walls at the end of the blocks displayed images of traditional -Chukotkan life – a bowhead whale, a fishing boat or a reindeer herd – freshly painted in primary colours which highlighted the faded greys of the washing strung like bunting from window to window. Given the leprous state of corrosion that characterises most Siberian cities, this was mysterious.

In the shortening days of September, you felt winter shouldering in: cold air tickled high in the nostrils, and distant vistas shivered in advance of their swaddling snow. The bunting-washing hung stiff as salt cod. To cheer us up, a brass band played stirring tunes on the steps of the House of Culture, a central-casting Soviet monster with a swooping steel roof and a façade that said, ‘Don’t come in here.’ On the gritty shore behind, men lit a barbecue with a blowtorch.

I was researching a book about the Arctic and its peoples, and I needed to find out more about the Chukchi, an ethnic group whose presence predates Russians in Chukotka by millennia. Petr Omrynto had granted me an interview: he was a former reindeer herder who had risen to become the sole indigenous representative in the Chukotka Duma, or parliamentary assembly. According to Sasha, he was ‘the most famous man in Chukotka’, admittedly not a hotly contested field.

We met in the office of the Marine Mammal Hunters’ Association, where miniature Chukotka flags fluttered gaily from jam jars. Omrynto was a tall, square man with black, cropped hair and sprouting eyebrows. He liked to talk, especially about reindeer. ‘Reindeer,’ he said as he settled into a chair and stretched out his long legs, ‘are the glue that binds Chukchi culture and society’. His hands, big as root vegetables, conjured the shapes of herds flowing across the tundra. But modernisation, industrialisation and philistinism had left the Chukchi behind. Endemic unemployment, suicide, alcoholism, TB – Omrynto winced as he reeled off the symptoms.

It was already owl light when I hurried up the wooden steps of the cathedral for the five o’clock Saturday service, and the taffeta sheen of the golden domes had flattened. The whole building, appropriately scaled up from the modest local churches, was built of weathered aspen boards: a magnificent chalet of a cathedral. Inside, candlelight flickered over painted faces, the tidal drone of a male choir rose and fell, and ponytailed young monks strode around noiselessly. Here were the obedient servants of the eastern Church quietly commemorating their martyrs, their lilting low prayers echoing back to a time before Soviets and oligarchs – though not before reindeer.

Outside the church, small boys ran around wearing Chelsea FC caps. We were a long way from Stamford Bridge. Enquiries revealed the unexpected presence of über-oligarch Roman Abramovich (owner of Chelsea). He had registered his companies in Anadyr to benefit from its low tax base – and got himself elected governor for eight years. During his tenure, regional capital investment increased twelvefold. It was he who had paid for the 200-foot murals of whales and reindeer.

On my last day, I set off on a hike across the tundra. Sunlight bounced off the mosses of the plain, lingering on water pooled in swampy hollows. Only the faintest breath of wind moved the blades of sedge, and silence hung heavily, except for the whee-hee of Aleutian terns. The oceanic surface of the tundra puckered with low growths of cottongrass, stands of alders or a bilberry bush. When I turned away from its bitter grandeur, the castellations of Anadyr rose, self-contained as a mediaeval citadel.

Sara Wheeler’s The Magnetic North: Notes from the Arctic Circle is available from Vintage Books.

Time to get rid of the licence fee

Spring issue of the Oldie available to download now – one week early!