In praise of birds 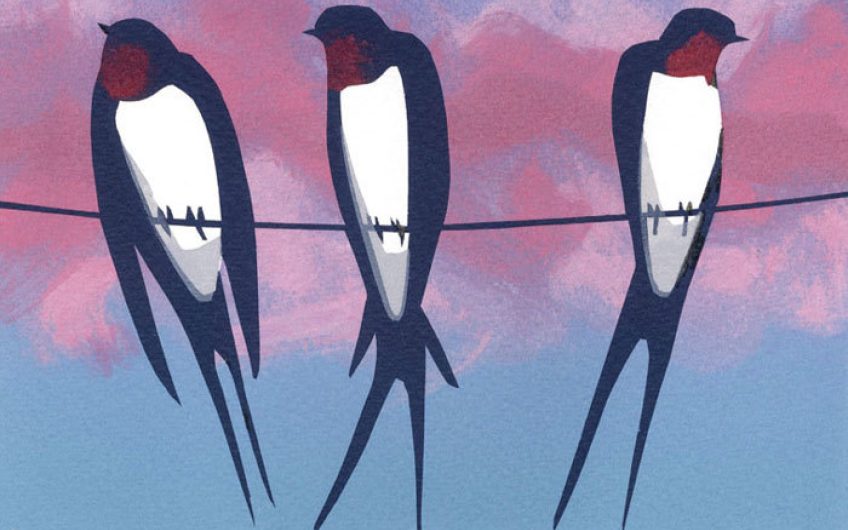 Every four weeks, the Bird of the Month flies into my inbox – one of my favourite moments in the Oldie office.

As an amateur birdwatcher, I’m sad that we don’t get many birds in our Fitzrovia office (although Harold Pinter’s son, Daniel Brand, did once write a letter to us, addressed to the Great Tits of Great Titchfield Street). So, when John McEwen and Carry Akroyd’s columns arrive, it’s like the whole British bird world descending on central London.

Carry Akroyd’s pictures make for a delightful injection of rich colour into the Oldie’s pages, not just in the plumage of the birds, but in their carefully observed surroundings: the rock crevices favoured by the jackdaw; the snipe jinking through the snowy woods; the puffins surveying their sea kingdom.

Look closely at these pictures and you’ll see how Carry captures, in the background, those different flying positions ever so carefully. In her swallows picture, she gets the way they gather on telegraph wires before heading south at the end of the summer; the way they hunch up and gossip away to each other. Then, in the background, she completely nails, in seven images, that most heart-lifting sight, the soaring, swooping and darting, arrow-like movements of the swallow as it scoops up its insect harvest.

We all have our favourite birds – we study them so closely and so regularly that we know their habits better than we do ourselves. Mine is the guillemot; I’ve been watching them gather at Stack Rocks, near my parents’ Pembrokeshire cottage, every summer for 35 years. Carry has got their subtle little movements down to a T: the way they nod, raise their heads, slightly sniffily, and bump right up against each other on their crammed nesting sites.

John McEwen is an expert ornithologist but he writes in a way that transcends the dry, verbose, scientific prose of ornithology. A distinguished art critic, he has the aesthete’s eye for the movement and plumage of a bird. He sees, quite literally, the poetry of birds: quoting from the best poets, who are so often bird-lovers, finely attuned to birds’ calls; whether it’s Norman MacCaig on the curlew (“Music as desolate, as beautiful, as your loved places”) or John Clare on the nuthatch (“In summer showers, a skreeking noise is heard”).

Like all the best journalists, McEwen empathises with his readers – and, in this case, their everyday experiences with birds today: whether it’s with the mistle thrush who made its untidy nest in a traffic light in Beeston, Leeds, in 2010, or the pied wagtails who roost in Tesco car parks, marinas and petrol stations.

All British bird life is here.

Fortnite has its first world champion!