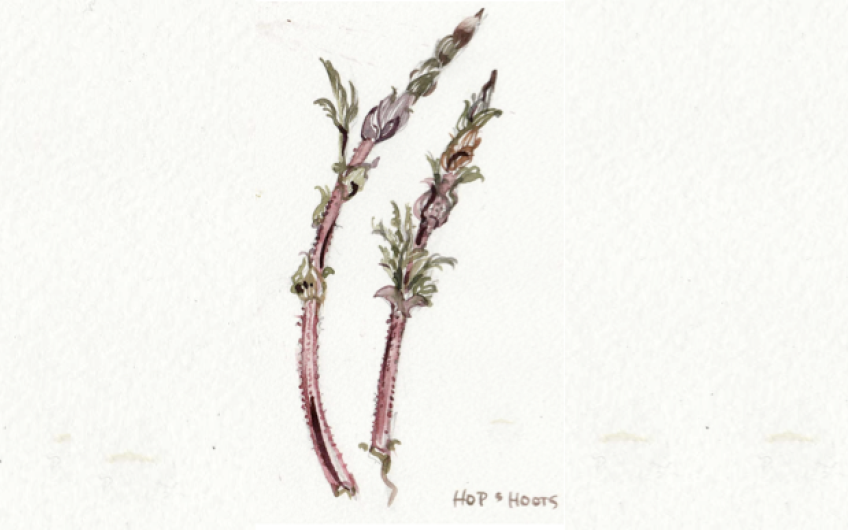 Hop shoots, the new growth that pops up looking like hairy asparagus at the base of last year’s tangle of dead hop stalks, were once carted into the markets of Victorian London from the hop fields of Kent in such quantity that sellers were taxed on profits.

Odds are, you’ve never noticed them in the garden, unless as a welcome sign of spring. Nevertheless, ornamental varieties of Humulus lupulus, a trailing vine best known for the triangular, green flowerheads used to preserve and flavour beer, are botanically and gastronomically identical to the beer hop.

In Belgium, Italy and Germany hop shoots are grown as a commercial crop – earthed up to preserve whiteness and smoothness just as soon as they pop their furry little heads into the light.

In Britain, we lost our taste for hop shoots some time in the middle of the last century, probably during the Second World War when everyone was so busy digging roots for victory that they forgot (or never recognised) what was good for them right under their noses.

Country people are slower to change than townies, which is no doubt why Dorothy Hartley, chronicler of rural life between the wars in Food in England, recommends serving hop shoots with melted butter on toast, or including them in a thick pea soup prepared with the last dried peas of winter, or adding them to a brown butter or cream sauce instead of capers.

In these more gastronomically adventurous times, greengrocers sometimes stock hop shoots in the short season, while gardeners blessed with an ornamental golden hop – pretty as a picture when trained over rusty ironwork – can pick their own; and those who live in beer-brewing regions might approach their local commercial hop-grower and make a deal for a spot of pick-your-own.

The flavour of the unblanched shoots is starchy and a little bitter – blanched are blander and sweeter. Texture is chewy asparagus (the hairiness vanishes in the pot). To gather, says Hartley, pick hop tops no more than four leaves down and no later than May (though I’d say that’s a little late). To prepare, soak in salted cold water and cook in plenty of boiling, salted water till tender. Serve as they like them in Italy, with a dipping sauce of hard-boiled egg mashed with olive oil and salt, or with a vinaigrette or a lemony mayo; or as they like them in Germany, with a soft-boiled egg; or in bureaucratic Brussels with an hollandaise and a scrape of the last of the Périgord truffles – what else?

Walking the dog – after the looting