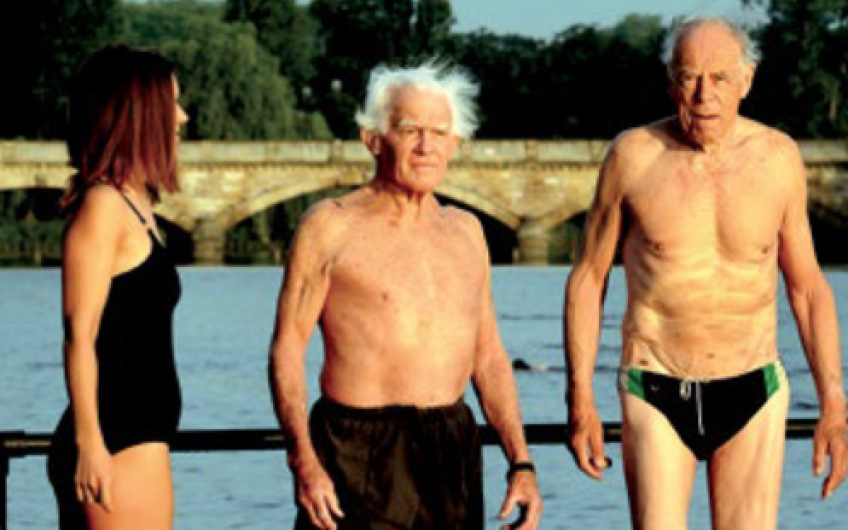 It’s high time for oldies to start living with youngies! That’s the conclusion of a new report by the think tank,‘United for All Ages’. The report says we should create five-hundred cross-generational housing, care home, school and nursery sites to break down ‘age apartheid’ and counter Britain’s reputation as one of the most ‘age-segregated countries’ in the world.

The Oldie got there first! Here’s an article from the December issue, by a youngie who moved into a house of oldies. Lalya Lloyd talks about this ‘joyful side-effect’ of the housing crisis and what a great eye-opener mixing age groups can prove to be.

‘We have a problem with mice,’ announced Tom decisively, as I stood warming my back against the Aga one morning, blearily nursing a cup of coffee.

‘No, darling, you misheard me. I said there is a problem with the mice.’

What, I wondered, was wrong with our mice in particular?

‘I came in late,’ Tom, my landlord, continued, ‘And there he was, a little brown mouse – bold as brass – strolling across the floor with his hands in his pockets, as if he owned the place!’

In the nine years I have lived in this rambling, 18th-century Kensington house, I have come to relish the liberal mixing of metaphor and reality that are such a feature of Tom’s manner of speaking. Tom is Tom Stacey, an 87-year-old publisher and former foreign correspondent, who moved into the house in 1969.

When I arrived, he warned against living with ‘antiques’ – himself (then 79), his wife, Caroline (78), and his friend Roddy Jones (74); I was young (25), bold and thought myself terribly clever.

‘Well, I am a classicist after all – I am an expert on antiquity,’ I quipped. (I teach classics at University College School in north London).

I’m 34, but have started to wonder who is the youngie here, and who the oldie. Age, as the cliché would have it, increasingly feels like it’s just a number.

Just look at the ways we pass our leisure time. While I often spend evenings in front of the telly in the ‘back parlour’ (I’m not allowed to call it the ‘TV room’), Tom strides across the garden with armfuls of leaves, jogging around Kensington Gardens, or foot-scootering to White’s (where he is known for his sets of postprandial stairway pull-ups).

‘What meal is this?’ he will ask, gently mocking, as I tuck into scrambled eggs at 3pm. I am too ashamed to admit that it isn’t lunch; it’s breakfast. Having a routine, and being active – these are the two secrets to a happy and productive life.

My fellow lodger, widower Roddy, ex-Royal Welch Fusilier – who died earlier this year at eighty-two – was even more consistent in his habits. If he wasn’t in Dorset or northern Afghanistan (where he, a fluent Arabic and Dari speaker, ran a women’s charity with Peter ‘Scrubber’ Stewart-Richardson, a brigadier who built clinics in Afghanistan) his morning routine was unwavering: tea, cornflakes – and an all-weather swim in the Serpentine. A climbing accident, when aged forty-five, had resulted in his almost losing a leg, and he walked with a limp – but with speed and agility, cutting a distinctive figure with walking stick, backpack and pakol (a sort of Afghani beret) as he struck out towards Hyde Park on those early morning expeditions.

In a large, congenial house – with a shifting handful of our friends, and Tom’s, we each pay our way with food, fuel and washing powder – communication is key. After a late night around the kitchen table, I came downstairs to a note from Roddy, reprimanding me for slovenliness. His messages were to the point: ‘Kitchen a mess at 0800 hrs. Sort it out. Signed: ERLJ.’ I’m well trained now: I always clean up.

Tom is also a great note-leaver. As a Fellow of the Royal Society of Literature and former Foreign Correspondent of Year, writing for the Sunday Times, covering 128 countries and interviewing Krushchev in the Kremlin, every note has style. Roddy’s notes were rooted in reality; Tom’s are wonderfully abstract. ‘Whose?’ demands the memo attached to an Amazon package that’s been sitting in the hall for a week. ‘Only for the Thin, please,’ says the communiqué on the seat of a beautiful, 18th-century piano stool. When these messages break their moorings and begin to float around the house, they spark amusement and bafflement in those who discover them.

If Tom’s mind exists high on a metaphorical plain, his wife Caroline soars above us like pure energy. A gifted, prolific sculptor, she was diagnosed with Alzheimer’s in 2007 but, mercifully, is as content, elegant and dignified as ever. Conversing with her can feel like composing freeform, abstract poetry. I remember standing in her studio and asking about her large family (25 descendants to date).

After thinking a while, she said it was wonderful to ‘create’ human beings, and especially to do so ‘with your hands’. It took me a second to register the confusion; the poignancy of that moment will stay with me a long time.

It would be impossible not to become co-dependent. We talk about ‘our’ friends; dinner parties are an intergenerational affair. My artist sister, who lives here, too, and I went to stay with Tom at his bolthole in North Wales this July. On an afternoon dog walk, he took us on a short cut through a sea of six-foot bracken. Tom scaled the equatorial snows of the Rwenzori Mountains in Africa soon after his 71st birthday – a few Welsh ferns weren’t going to get in his way.

Perhaps the housing crisis and longer life spans will have a joyful side-effect. Forget moving in with your parents. It’s the oldest generation we can learn from, with their steadfastness, humour and impeccable manners. And this can be a delightfully two-way street.

This article was taken from the December 2017 Oldie. Subscribe to The Oldie here.

New York gets its mask on

Stitched up royally by my teenage son and his mates