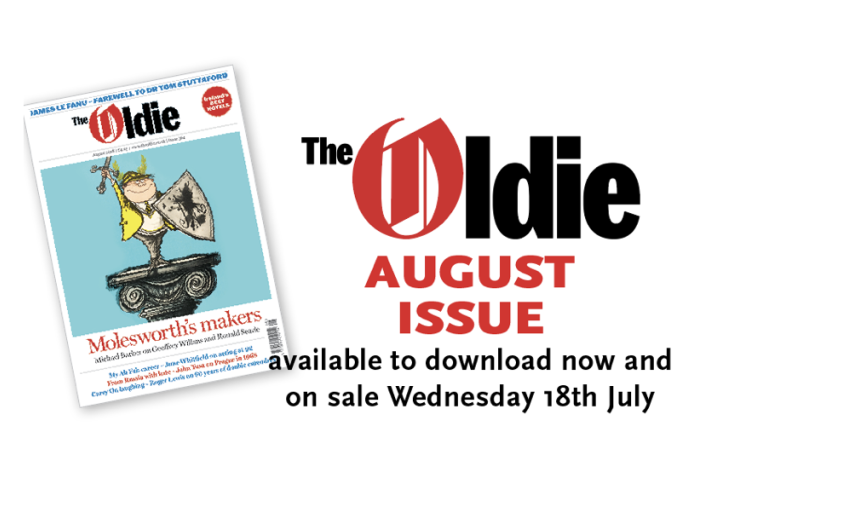 Welcome to the August issue of The Oldie, packed with gripping articles to keep you glued to your deckchair.

Cartoon fans are in luck. Michael Barber recalls the life, and premature death, of Geoffrey Willans, the brilliant writer who invented Nigel Molesworth and collaborated with Ronald Searle to create the marvellous illustrated books.

The issue is also packed with original cartoons, including two wonderful Ed McLachlans.

Plus, listen to new interviews for the August issue with Sophia Money-Coutts on modern manners: drinks at 6.30, dinner at 8.30 – and get married by 30. The former features director of Tatler talks tongue-in-cheek about the world of the magazine, and her new book The Plus One which is published on 9th August. Listen to the interview here.

We have extracts from the compelling talks by Sam Leith and Mary Kenny at The Oldie’s Journalism Course. Mary enlightens course-goers, telling them that 'only a blockhead goes into journalism for money' in her session on 'How to Write a Column' – something she has been doing now, for the best part of 50 years. Listen to the snippet here.

Sam Leith, literary editor of the Spectator, talks about 'How to Write a Book Review' and proffers wisdom on how to make a review 'really sing on the page' and why you should read a book armed with a pen. Listen here.

We also have our talks from the Literary Lunch at Chichester Cathedral, in partnership with the Literary Festival. At the lunch we had Anna Pasternak speaking about Lara: The Untold Love Story and the Inspiration for Doctor Zhivago. Anna is the great-niece of the Nobel Prize-winning novelist Boris Pasternak – author of Doctor Zhivago. She tells the story of the true and tragic love affair between Boris and Olga Ivinskaya which inspired the literary classic. Listen here.

We have Christopher Somerville on The January Man: A Year of Walking Britain. Month by month, season by season and region by region, Christopher walks many of the 140,000 miles of footpaths across the British Isles. He delivered his talk as a long, glittering poem, hinged on the rambler's great love – the pub. Listen here.

Finally, we have Stanley Johnson on Kompromat. The father of our Golden Oldies columnist, Rachel Johnson, reveals that he wrote the book in 12 weeks flat, on a strict diet of 4am starts. It is a political thriller – an account of the skulduggery that might have gone on behind the scenes in the run-up to the EU referendum. Described as a ‘unique peek under the dirty doormat of politics’. Listen here.

Below you will find links to five FULL teaser articles but other highlights include.....

Olden Life: What was the D'Oliveira Affair? Christopher Sandford READ THE FULL ARTICLE

Modern Life: What is an incel? Richard Godwin

The Man who made Molesworth Michael Barber

When the Soviets invaded my homeland John Tusa

In another world - The Way We Live Now, Dafydd Jones

I have a dream - to met my GP – Grumpy Oldie Man, Matthew Norman

We're celebrities... get our train out of here – Short Cuts, Anne Robinson

I'm in the greatest show on Earth– Gyles Brandreth’s Diary

Brexit won't break this entente cordiale – Postcards from the Edge, Mary Kenny LISTEN TO MARY AT THE OLDIE JOURNALISM COURSE

Look up and you'll see the city is a giant aviary – Town Mouse, Tom Hodgkinson

Am I the John Singer Sargent of Surrey? – Home Front, Alice Pitman

Getting Dressed: Bringing the Middle East to M&S – Brigid Keenan

Agape at the power of selfless love – God, Sister Teresa

Reader Trip – Join Robert Fox and Huon Mallalieu on a tour of the Valle d'Itria and the Salento in Puglia, 18-25th May 2019 Rant on Showers – Joe Ruston

Travel: The commune is alive and well - in Lanzarote – Mark Palmer

Minoo Dinshaw on Facts and Fiction: A Book of Storytelling by Michael Holroyd

Kate Womersley on The Inflamed Mind: A Radical New Approach to Depression by Edward Bullmore

Hamish Robinson on Seven Types of Atheism by John Gray

Theatre – The Prime of Miss Jean Brodie at the Donmar Warehouse and Translations at the Olivier Theatre, Paul Bailey READ THE FULL ARTICLE

Television – Germaine Bloody Greer, The Trouble With Women, Nothing like a Dame – Roger Lewis

Gardening – A good year for the roses, David Wheeler READ THE FULL ARTICLE

Motoring – On the up, Alan Judd