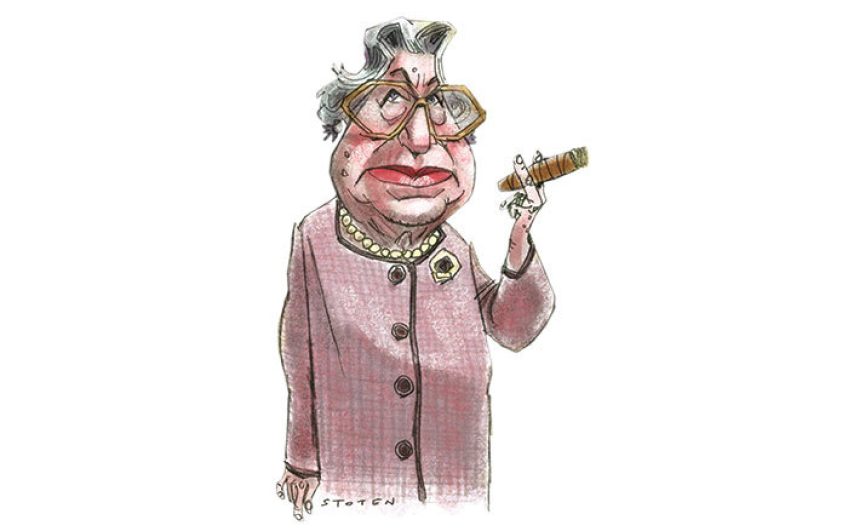 Jean Barker, Baroness Trumpington of Sandwich, was born in October 1922. She left school in 1937 aged fifteen and worked at Bletchley Park during the War. She was married to Alan Barker for 34 years until his death in 1988, and has one son and two grandchildren. Baroness Trumpington was Mayor of Cambridge from 1971 to 1972 and was made a life peer in 1980. She was Under-Secretary of State in the Department of Health and Social Security from 1985 to 1988 and Minister of State in the Ministry of Agriculture, Fisheries and Food from 1989 to 1992: at the age of 69 she was the oldest female minister ever. She was made a Dame Commander of the Royal Victorian Order in 2005, and has held many other public positions.

In the Lords last year, you said, ‘Women have great difficulty in taking their proper place in society,’ and you called the House of Lords a ‘funny old place’. Are you a feminist?

I’m not a great feminist but I think fair’s fair, don’t you? Things have improved – there are more women in politics.

You were one of only a few women in Margaret Thatcher’s government. How did you get on with her?

I argued with her if I didn’t agree but she never held it against me. She used to scream at me and I used to scream back. When I was in Health, I was on the mental health side. The Daily Mirror was running a campaign about hospital treatment for the mentally deranged. I said they were right and she said the Daily Mirror was never right. The poor man sitting between us thought we were going to hit each other. I was terrified of her but, my goodness, she was good to me.

What do you make of the changes to the NHS?

The local practices do OK. It's when you get to the big hospitals that there's something terribly wrong. I have twice queued all morning. You don't mind queueing, but you do mind two and a half hours. I think it's geographical - it matters terribly where you live.

'Do you agree with the privatisation of the National Health Service?

You’re going too far. It’s not being privatised. Privatising would mean poor people would suffer. I don’t believe any government would put forward legislation which would damage the relationship between doctors and those who have no money.

You were a health minister at the time of the AIDS crisis – what do you remember about that?

I remember the hysteria and people thinking you’d catch it from shaking hands. I think I was almost the first person to publicly shake hands with someone with AIDS. I was taken to meet him by a doctor. I’m actually pretty squeamish. I was once taken to an operating theatre during a heart operation and they stopped when I arrived. I said, 'For Christ’s sake, please, don’t stop.' We went into a ward where they all had needlework fronts where they had been sewn up. That was shattering, and also an invasion of privacy – but at least I got an idea of what people go through in hospital.

You left school at fifteen...

Yes, thank God. I loathed it.

I’m not going to tell you. They asked me back recently to be the guest speaker at speech day and I said I loathed my life with you and I hope never to go into your school again.

What separates your generation and mine is the war. How did it affect you?

You learned to grow up quickly. I lost my home in Kent the day war was declared. The army requisitioned it. I had two brothers, one in the Navy at Dartmouth College and the other at Eton. They sent him to relations in Chicago. When I was 15, in 1937, I went to Paris for two years to live with a family and learn French. I was also learning German. But when I came back in 1939, my parents didn’t know what to do with me. They knew Lloyd George and he needed a land girl so that’s what I did next. I was sent to live in a cottage on his farm. It was lonely, I was the only one, and there were only old men there – the young ones had joined up. I left after a year and went to secretarial college. Then I went to Bletchley.

What did you do at Bletchley?

I’ve never talked about the work I did and I’m never going to. You were not allowed to talk about it. In your spare time, it was the last thing you wanted to talk about anyway. Every week we changed shifts and that was the worst – nine to six, four to midnight, midnight to nine – you never got a sleep pattern. Nurses do shifts for three months or six months, so they get a sleep pattern. It was exhausting. But we were young; so, if you had a long change, you rushed up to London and danced all night.

What are the good things about getting older?

You can get away with more. I don’t think I would have dared say half the things I do now. A few months ago in the House I leaped up at a moment I wasn’t meant to and I think I only had the nerve because I am so old. The chief whip tried to stop me but I went right ahead. I also raised the question earlier this year of the police selling off their old cars. I said my husband and I used to scream about the country lanes in the one we bought and everyone thought it was a police car.

What about that V-sign you made when Lord King gestured towards you during a debate last year and said the survivors of World War II are looking pretty old?

When I’m in the House of Lords, I don’t think about television; so, as far as I was concerned, it was private. But I thought he was rude – you don’t say that to ladies! We had a laugh about it afterwards.

Have you seen the comments about it on YouTube? Some are horrid, but others say things like ‘Way to go, Baroness Trumpington’ and ‘Ha ha, she flips him the bird, what a babe!’

Oh go on! I love it! I was amazed by all the fuss. I tried to pretend I was combing my hair. Fat chance.

What are the bad things about getting older?

I resent not being able to do the things I used to do. I can’t play tennis. When I was young, I trained for junior Wimbledon. I couldn’t dance now if somebody asked me to. I am going blind. I used to do a lot of needlepoint – I made tapestry cushion covers of people’s houses and was very much in demand. I once did a card table with all the cards in petit point.

Do you feel wiser as you get older?

Not really. I like it that you get a certain clarity. But how long before you become senile? I’m still incredibly nervous about talking publicly, which you probably don’t believe. If you look at my hands you’ll see they shake like a jelly.

Is there anything you’ve given up?

Smoking – I used to smoke forty a day. It was at the time of 9/11. I was in hospital and I went downstairs in my nightie and had a couple of puffs outside. Then I tried having one in my room – it was private. A huge man in white came in and gave me absolute hell. Then I thought – I’m mad; hospital is the best place to give up because you can’t smoke – and I had bronchitis! It was stupid to go on and very expensive.

Who in your life had the most influence and impressed you the most?

As you get older do you think more about death, God and the afterlife?

No. I believe that we’re like the flowers in the field. We grow, we bloom, we die and that’s it.

So no pearly gates?

I rather hope not. There are a hell of a lot of people I don’t want to see again!

How would you complete the phrase ‘Life is a…’?

Watch out for prostate cancer! By Graham Sharpe