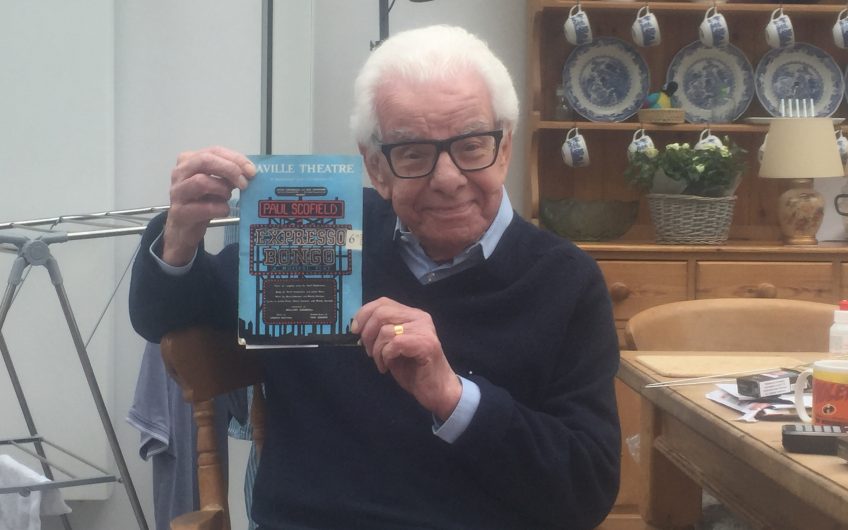 Barry Cryer at home with the programme from his 1958 show, Expresso Bongo (Picture: Harry Mount)
View Full Size
1
of 1

During lockdown, the Oldie's favourite comedian Barry Cryer has been confined to his Hatch End home. So Oldie publisher, James Pembroke, and editor, Harry Mount, made a pilgrimage – and were treated to golden jokes and reminiscences.

They came bearing a copy of the programme from Barry's first big break, the 1958 musical Expresso Bongo, starring Paul Scofield – 'A lovely man,' Barry said. Barry wrote the title number for the show and launched into a lovely, basso profondo version of it for James and Harry. Barry played a character called Beast as well as a teenager in the show. Many thanks to Oldie contributor Michael Leapman for providing the programme. A year later, the play was made into the 1959 film, Expresso Bongo, starring Cliff Richard and Laurence Harvey.

Barry then told James and Harry a surreal joke – an unusual one for him. 'I tell it to audiences sometimes – and they're silent!' He said. 'But comedians love it.'

A man walks into a pub and the landlord's astonished. Half of the man's head is half of a huge orange.

'So sorry to be nosy,' the landlord says, 'but why is half of your head half of a huge orange?'

'Well, I was cleaning up the loft,' the man says. 'And I found an old lamp. I polished it up, and a genie came swooping out of it, saying, "May I grant you any three wishes, master?"'

The genie said, 'Your wish is granted. And your second wish?'

'Your wish is granted,' says the genie. 'And your third wish?'

'I'd like half my head to be half of a huge orange.'