Belgravia's more than a TV series. It's one of Britain's great contributions to urban planning 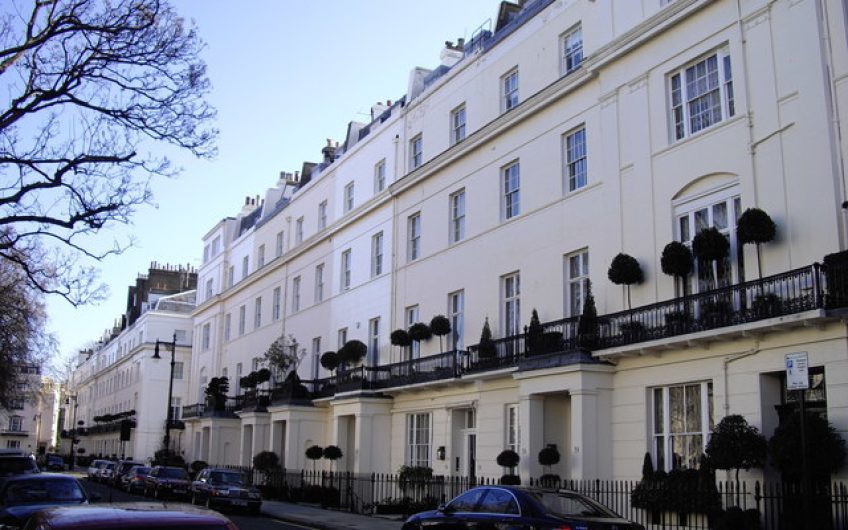 From the 16th to the 18th century, four great aristocratic families developed much of London, filling their fields with streets, circuses, squares and crescents.

Still, today, much of that gilt-edged land is in the hands of their descendants: Earl Cadogan in Chelsea; the Duke of Westminster in Westminster and Pimlico; Lady Howard de Walden and Viscount Portman in Marylebone.

It is these great urban estates which allowed such long, snaking, uniform terraces to be built, stretching over acres of land owned by single individuals.

The expansion of aristocratic control was sparked off by the Reformation. Vast estates were handed over by Henry VIII from the Church to his friends and allies.

The power of the aristocracy was intensified by a declining royal court in the 17th century. Allied with an increasingly powerful Parliament, it was natural that new developments should go up in and around Westminster.

The first symmetrical piazza in England was built by Inigo Jones for the Earl of Bedford at Covent Garden in the 1630s. The first garden square was St James's Square, very close to Westminster, built in 1661. It was paid for by Henry Jermyn (as in neighbouring Jermyn Street), the Earl of St Albans, held up as the founder of the West End - in the days when the West End was still at the real western end of London.

Garden squares soon spread to the provinces. St James's Square was followed by Queen Square, Bristol, laid out in 1699, mirroring London's Bloomsbury Square, with two streets entering at all four corners of the square, each at right angles to the other.

The organic, higgledy-piggledy accumulation of garden squares of differing sizes - across London and other English cities through the 17th, 18th and 19th centuries - is a peculiarly English phenomenon. They also made English cities unusually green. When, in 1828, Earl Grosvenor was building the Grosvenor estate in Mayfair, he asked the developer Thomas Cubitt, who also built much of Belgravia, "Will you ensure you bring a little country into the town by having garden squares?"

Nikolaus Pevsner thought London garden squares, informally connected to each other in a loose rhythm, were the city's principal contribution to the history of European town planning; so unlike Baron Haussmann's boulevards, carved through Paris in the 1860s, the Emperor Trajan's symmetrical Forum in Rome, or indeed Mussolini's thumping great triumphal straight roads, sliced through ancient and medieval layers of the city in the 1930s.

On an early trip to England in 1930, Pevsner was particularly taken with the garden squares of Bloomsbury and Belgravia. He liked the way they had been arranged, in haphazard relation to each other, with no focal point - the reflection of centuries of an independent bourgeoisie developing the city in an organic way, with no overarching plan forced on them from above. The only thing that Pevsner took against was the anti-social taste for fencing and locking up the gardens - a reflection of the English cult of property ownership.

Rows of terraced houses started snaking north of St James's Palace in the early 18th century. By the end of the Seven Years War in 1763, they had spread north and west of Cavendish Square. Development was particularly intense in the square bordered by Portland Place to the east, Oxford Street to the south, Edgware Road to the west and the New Road, later Euston Road, to the north.

Euston Road was built in the 18th century by the Duke of Grafton, also the Earl of Euston, then owner of much of the land around modern Euston Station. He designed it expressly so that, every working day, 1,500 cattle could get to Smithfield Market from the west, without blocking Holborn and Oxford Street. Cattle transport had a lasting effect on the English landscape, and townscape. You can spot a drover's road by its name - there are Bullock Roads, Drove Roads and Cow Lanes across the country, particularly in the Midlands. The old droving road from Wales to Northampton is still called the Welsh Road. Many of the lanes that lead into agricultural towns were originally drovers' roads.

Much of London's development was at the hands of aristocratic urban landowners like the Duke of Grafton. The Howard de Walden family, the Duke of Westminster, Earl Cadogan and Viscount Portman own vast swathes of the city centre today. The Russell family – in their later incarnation, the Dukes of Bedford – owned most of Bloomsbury between 1175 and 1850, and still control a big chunk of the area.

That continuity of urban land ownership by single families is uniquely British – a reflection not just of the power and wealth of the aristocracy, but also of sustained democracy, respect for property rights and a lack of revolutions and apocalyptic economic crises.

The lack of English revolutions (the English Civil War apart) – against the monarchy and, by extension, the aristocracy has astonished those who are more used to them in other countries. Otto Hintze, the pre-War German historian, said England was made up of living fossils, dependent on a feudal system that had been toppled practically everywhere else in Europe.

In the 18th and 19th centuries, English cities were largely built by a combination of these landowners, working in conjunction with developers. Because the landowners controlled large stretches of virgin land in the expanding cities, the organised building of long terraces was possible.

Landowners worked hand-in-glove with developers, through the peculiarly English intricacies of the leasehold system. The landowner let plots to the developer, who then paid for the construction of the terraces and sold them to leaseholders. Once the initial lease expired, those terraces became the property of the landowner. On the security of this deal, the developer borrowed the funds to pay the construction costs.

The developers would erect a pub first, to feed and house their labourers, and to pay for the rest of the terrace to be built – that’s why pubs are so often found on corner sites.

The pub not only brought in money from patrons; it provided a place for builders to eat, drink and sleep in. In extremis, the pub and its licence could be sold off to pay for finishing off the terrace.

When John Nash built the Quadrant, at the bottom end of Regent Street, in the early 19th century, he developed several houses for himself. He lent the money for building other properties in the Quadrant to his plumbers, glaziers and bricklayers. They then did work for free on each other's houses, and on those owned by Nash - now not just the architect, but also the developer, speculator and all-round wheeler-dealer.

The state may have intervened on a massive scale into private life over the last century, and wrecked big patches of our city centres. But, still, our cities - and our sewers, railway and canal infrastructure - remain essentially Georgian, Victorian and Edwardian; and built by private hands, not public ones, with an unusual degree of freedom.

Because there has been no over-arching planning authority - no Trajan, no Haussmann, no Mussolini - London, and most English cities, haven't ended up with the straight, wide boulevards of Paris or Fascist Rome.

English cities have few dominating axes or ordered plans. As a result, they present less of a grand spectacle, and look less bewitching from the air than rooftop cities like Paris or New York – no grand avenues, no pleasing grand-scale geometry. But on the ground, at eye-level, they present more surprises – more half-glimpsed side streets, more curves, more variety of scale between alley, dead end and main street.

The unit on which the English city largely depends is the terraced house, multiplied into varied matrices of squares, crescents, circuses and terraces, forming long, looping lines across the cityscape.

On the Continent, fragmented urban land ownership meant mass urban housing couldn’t be built in the same way. Parisian aristocrats owned grander, detached private houses, or hôtels, with walled courtyards separating them from the street. Even the English rich were squeezed right next door to each other in Mayfair terraces, in grander, inflated versions of the terraced houses lived in by the vast majority of the working and middle classes.

Squeezed-together, low-rise, small-scale terraced houses are unusually English. They are often what first strike foreign visitors travelling into London through the suburbs on the train.

Just as the land-owning structure of England - with large tracts of land owned by individuals - meant terraced houses could be planned in those long lines, their gardens, too, could be neatly aligned with the continuous lines of railway track.

The terraced house owes much of its existence to the landowning idiosyncrasies of Britain and London – so strongly influenced by the aristocracy.

ALAN BADEL: AN ACTOR WHO COULD PLAY ANYBODY by Trader Faulkner