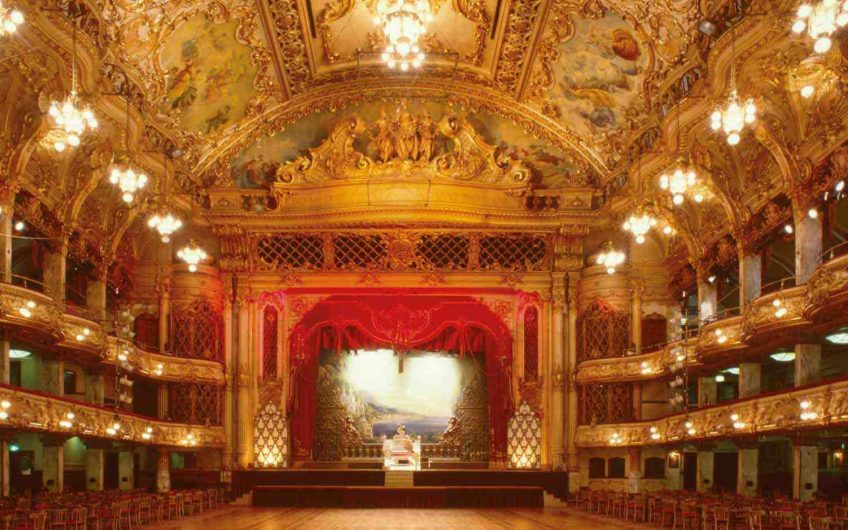 For over 200 years, the Lancashire town has witnessed joyous buildings soaring above the ultimate pleasure beach. By Lucinda Lambton

I will never forget driving along Blackpool’s seafront in the early 1950s, waiting for the illuminations to blaze into life, as they had been doing since 1912.

My mother was driving me and my three sisters – one more and a brother to go – in a giant mobile home. I can so well remember the sense of excitement as we contemplated the promise of our surroundings which were about to be transformed in such a novel and exciting way. HURRAY!

The town had one of the oldest fairgrounds in the world, opened in the 1730s. From the first visitors who had enjoyed the doubtful pleasure of drinking the prescribed dose of 25 gallons of seawater – a pint at a time – on to the roaring terror of the rollercoaster, Blackpool has provided ever more frenzied entertainment to attract the crowds.

In the 1890s, there was the outlandish scheme of training hundreds of parrots to screech about the delights of the Winter Gardens, before leaving them with their enticing jabbering in hotels and restaurants all over Lancashire. They had a good deal to screech about.

The two main centres of entertainment have for decades been the Tower, with the Tower Ballroom, and the Winter Gardens, built with the art and architecture of the fantastical.

It would be hard to find a more opulent spot in the British Isles than the Ballroom, commissioned by John Bickerstaffe – pioneer of Blackpool’s popularity and always known as Mr Blackpool – in 1898. It was created by the hand of Frank Matcham, king of theatrical design.

Reminiscent of a giantess’s boudoir upholstered in gold, tiers of boxes bulge forth amid the glittering ornamentation. Swelling up to the ceiling, a pageant of gilded plasterwork embraces paintings of celestial scenes – one with an alarming devil, embracing flower-bedecked maidens. ‘BID ME DISCOURSE AND I WILL ENCHANT THINE EAR,’ from Shakespeare’s Venus and Adonis, is emblazoned over the proscenium arch.

In June 1929, a mighty gold and white organ was installed, to rise up amid a fog of dry ice, to the enticing strains of ‘Oh, I do like to be beside the seaside’, played with vim and verve by Reginald Dixon between 1930 and 1970.

One terrible morning, on 14th December 1956, this stupendous glory of a place was gutted by fire, caused by a single cigarette. With inspired grandeur, Douglas Bickerstaffe, whose father had given so much of the land for the pleasure grounds, decreed that it be entirely rebuilt to its original designs. It was said that he was ‘hewn of the same granite as his father’.

Life had become luxurious, with such splendours as the Imperial Hotel staging Gilbert and Sullivan operas and grand dinners, where it was obligatory to ‘dress’. The Palm Court Orchestra would play the night away.

The Turkish baths were richly encrusted with decorative tiles. Having fallen into a state of disrepair, they are being meticulously restored.

In 1910, the tempting draw was Little Emmie Tweedsale, otherwise known as La Petite Pavlova. Time was kind to her, and she was still billed as ‘Little’ in 1935. The Spinsters’ Ball was a regular feature, with rose petals showering down on the dancers. During the Second World War, the ballroom was given over to silk-parachute-making.

At the Spanish Hall in the Winter Gardens, whole model villages sprouted forth from the balconies. They are still alive to this day. They were all created by Andrew Mazzei, chief designer at Gaumont Studios in the 1930s.

At the Winter Gardens, I tracked down late-19th-century tiled tableaux merbabies, as well as 1930s chandeliers wrought into crowing cockerels. Gaudi-esque ceramics streak up stairways and plaster figures of ‘antique distinction’ enhance the walls of the main concourse.

Then there is the ornate Pavilion Theatre, where Sarah Bernhardt played in 1882, giving an irksomely inaudible performance in French, to cries of ‘SPEAK UP, LASS!’

And there was the Tower, the beacon of Blackpool, built in 1896, when the season had boomed to bursting point.

One visitor from Burnley found the sitting room of his lodging house so full of visitors that there was nowhere either to sit or to stand. His bedroom had been let to a honeymoon couple and he was forced to share with nine bachelors – with only three beds between them.

The Tower shelters, of all glorious surprises, a most magical Moghul circus. The ring is dead centre beneath the tower, surrounded by the richest architectural exotica, ablaze with gold leaf.

At the circus, you are relishing the show when the ring sinks and, blow me down, in 60 seconds flat, is filled with 40,000 gallons of water, for a dazzling aquatic act. There are no longer any animals in the circus but their curious quarters still survive, along with the faintest smell.

Along Blackpool’s Golden Mile, Joseph Emberton was commissioned in the 1930s to give identity and order to the place, with masterly examples of the Modern Movement – smooth, suave and curvilinear – the style that gave such hope for a streamlined future.

There are other architectural landmarks at the Pleasure Beach. Noah’s Ark was built in the 1920s and the 1904 river caves have the most surprising structural secret. After the Second World War, when they needed repairing when materials were in short supply, they were re-roofed with the scrapped Mulberry harbours – which made possible the liberation of Europe in 1944.

The oldest ride of them all – the oldest in Europe – is the Hiram S Maxim ‘flying machine’ of 1904, designed by Maxim to raise funds for his attempts to be the first man to fly the measured mile. In the end, his steam-powered machine was too heavy to leave the ground, whereas the aeroplanes in Blackpool have remained in constant use.

The end of the real world is nigh