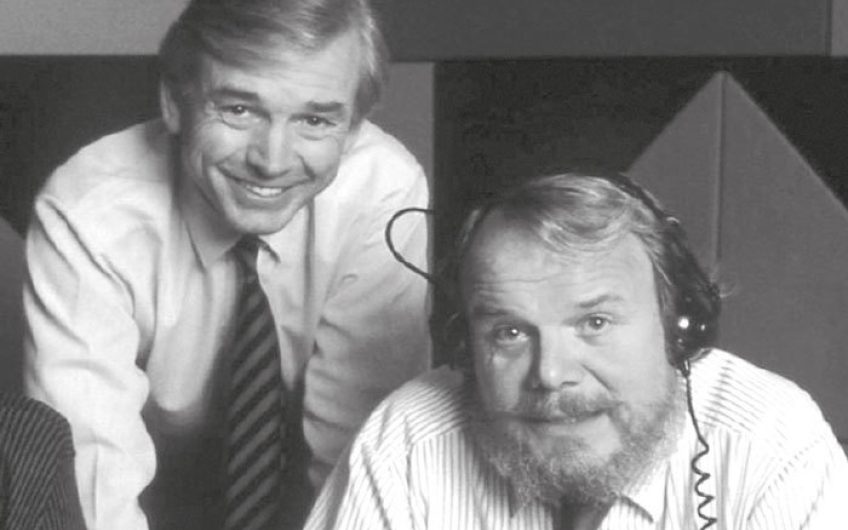 Today, the former Today presenter Sue MacGregor turns 80. Harry Mount watched the programme in action on the Today programme – at 4.30am

It’s 4.30am in dark, empty, central London. High up in BBC Broadcasting House, a light blazes through a window. Behind that window is the small studio – the size of an average kitchen – of the Today programme. In this tiny space, the BBC records Radio 4’s most popular programme, with a weekly audience of 7.45 million people – a new record.

The show is so embedded in British life that nuclear submarine commanders depend on it. If three days pass without Today being broadcast, that constitutes official evidence of a nuclear attack – the submarine commander is then allowed to launch a retaliatory strike.

In 2017, the Today programme celebrated its sixtieth birthday. That year, Sarah Sands, the Evening Standard editor, became Today’s editor, leaving her old job to George Osborne, the former Chancellor of the Exchequer.

For 33 years, John Humphrys, now 78 and retired from the programme, sat with his back to that window. On the morning I sit in on the programme in 2017, he is interrogating David Davis, Secretary of State for Exiting the European Union.

‘The big interview is what it’s all about,’ says Humphrys. ‘If you’ve got a serious interview on a serious subject with a serious Cabinet minister who is prepared to engage – as David Davis is – that’s the essence of it.’

‘Redhead was easily the best broadcaster in the land,’ says Humphrys. ‘He was Renaissance man. Very bright, very sharp, very quick. That’s half the trick – being able to think quickly.’

Humphrys has now been getting up before 4am, week in, week out, for over three decades.

‘I get in at four-ish. I go to bed at 8.30pm. It’s religious. I get annoyed because there are people who insist on enjoying themselves,’ he says, adopting a jokey, mock-grumpy persona. ‘I live in a square with a tennis court, with unthinking, selfish people who want to be enjoying themselves at ten past nine. Outrageous.‘I haven’t got tired yet. It’s the best excuse on earth for missing dinner parties: “I’m sorry I can’t come tonight because of the programme.” ’

‘I went through a terrible sleep crisis,’ says Justin Webb, a Today presenter since 2009, who first worked as a Today reporter in 1985. ‘I built an ecopod at the bottom of the garden. I can now go to bed at eight. I can get up and leave without waking my family. The key to it is separation.’

Every extra minute of sleep counts.

In exchange for the punishing hours, the presenters work for a show they’ve always longed to appear on. 18 years ago, Nick Robinson (a Today presenter since 2015) failed a two-day audition for the programme, when Rod Liddle was editor.

‘There was a reaction on the part of the audience that I was an annoying northern oik who was too chatty,’ says Robinson.

‘It’s extremely nerve-wracking starting on the programme,’ says Husain. ‘You don’t get a dry run. It’s such a familiar programme to so many millions of listeners. It’s immensely influential within the organisation. The decisions the programme makes in the morning run through the course of the day.’

Politicians also ache to appear on Today. Some ask to be grilled by Humphrys, Today’s Rottweiler.

‘The senior figures aren’t intimidated,’ Humphrys says. ‘One or two politicians aren’t the brightest, and they retreat to formula, to clichés. The morning after Cameron returned from Europe with his settlement, George Osborne was clearly going to find this difficult. He had bits of paper in front of him, which he normally didn’t. You could sense his unease. If they have to read from a piece of paper, then they’ve lost before they begin.’

Humphrys admits he was originally too aggressive. ‘I thought, “How do you make a name for yourself on this programme?” ’ he says. ‘Well, you’ve got to beat people up. I was occasionally even rude, which is totally unacceptable. I did an interview with John Hume and was pretty rude to him. I was showing off. I don’t think I’m aggressive now.’

Some politicians, such as Liz Truss, the Justice Secretary, never appear – ‘She won’t talk to us, unfortunately. And we don’t often see Amber Rudd,’ says Humphrys.

Practically everyone else is desperate to appear. ‘It is absolutely fantastic – the seriousness, the access,’ says Humphrys. ‘You can spend half an hour chatting to somebody who, in the normal way of things, you’d never even see.’

Presenters also praise the audience. ‘It’s not particularly thrilling that the Prime Minister comes on,’ says Justin Webb; ‘it’s the quality of the listeners. You’ve got a huge amount of people who are switched on and genuinely interested in world affairs.’

In the internet age, Today’s audience has grown. Nick Robinson has a theory why. He has been listening to the programme since the 1970s, when he was friends with Will Redhead, son of Brian Redhead. Robinson survived the 1982 car crash that killed Will Redhead.

‘I remember Brian saying, “Who needs breakfast television?”, in the early Eighties,’ he says. ‘I thought, maybe radio will be in trouble. Along came 5 Live, 24-hour news; I thought, maybe it will be tricky. Along came online and social media. At each stage, people have said, “Oh God, that’s it. You don’t need to turn on the radio.” ’

‘The answer is, the programme works with people’s lifestyles. If you’re jumping in the shower, brushing your teeth, then hearing a voice, not having to read, not having to watch, it just works.’

With Sarah Sands as editor, there are bound to be changes.

‘She’ll bring in a lot of new ideas,’ says Humphrys. ‘Her story selection may be completely different and that’s great.’

Sands may be surprised by the freedom Today presenters have. ‘Sarah’s going to find this,’ says Justin Webb. ‘The biggest shock is you’ve got two people in the studio who could literally say anything – nobody can stop us.’

So far, Sands hasn’t announced any changes. ‘It’s just an honour to join a programme with such deep national resonance,’ she says, ‘and I will do my best not to wreck it.’

The show, devised by Robin Day, was originally two twenty-minute slots wrapped around news bulletins. By the time Humphrys joined in 1987, it was similar to its current incarnation.

‘In the beginning, it wasn’t the Today programme,’ says Humphrys, ‘it was a collection of amusing radio bits. Its contact with news was minimal. Jack de Manio once said, “Yes, it’s a testing job. I had to do two news interviews this week.” ’

‘The programme has massively changed and not at all,’ says John Humphrys. ‘It’s a bit less formal. The voices of the presenters have changed. I listened to myself from thirty years ago, and I sounded frightfully posh. Because I was born in a rough area of Cardiff, in Splott, you change that when you join the BBC, just because you’ve got to make yourself intelligible. I’m more what I was now. I’m no longer conscious of having to enunciate.’

One thing won’t change – the importance of Today to Britain’s mornings. As Brian Redhead once said, ‘If you want to drop a word in the ear of the nation, you go on Today.’