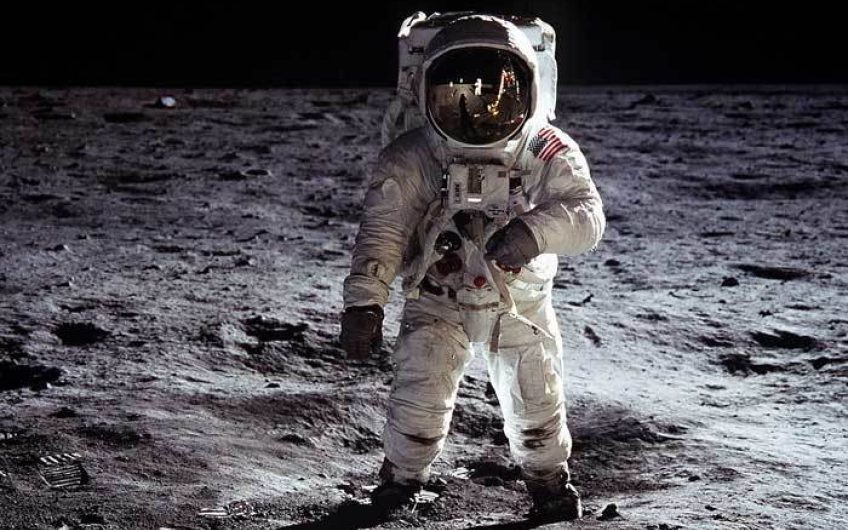 Buzz Aldrin on the moon
View Full Size
1
of 1

When I met the second man on the moon at a London Hotel, a champagne breakfast was definitely out. Aldrin was a fully recovered alcoholic, and had not had a drink for 20 years. ‘After going to the Moon, it was a question of readjusting to a non-focused existence,’ he said. ‘And that was coupled, I think, with a genetic pre-disposition that exhibited its traits in my parents which moved me towards alcoholism which finally I was then able to identify. And then, in a very difficult struggle to re-adjust, I had to overcome that.’

As he strolled into the courtyard restaurant at the belle époque Halcyon Hotel in West London I saw not a veteran astronaut but a sprightly marketeer, better looking and taller than I had imagined, with eyes that twinkled like Venus and a rather fetching, if slightly flashy, hand-painted blue silk tie bedecked with stars and moons. A gold ring depicting a star and moon adorned his finger, and an official gold pin – recognising his historic ride to Tranquillity Base with Neil Armstrong and his record breaking spacewalk (EVA) during the Mercury programme – was pinned to the lapel of his blazer. Buzz, whose mother was born Marion Moon, is almost a one-man lunar boutique. I wondered aloud if he ever looked up at the moon and said ‘Wow – I was there!’ ‘Sure – it does cross my mind,’ he said.

Although he had by then co-written two science fiction novels, Aldrin liked to separate fact from fiction in space travel. When I asked him his views of the conspiracy theory that the Russian cosmonaut Yuri Gagarin, the first man in space, didn’t actually leave the surface of the earth, he said: ‘When reality makes news, then the non-reality people want to create something that will draw attention to them as revealers of the real world.’ This doubtless includes the urban myth that the whole Apollo Programme was faked. I didn’t dare ask for a comment on that. Even at the (then) age of 69, Aldrin could easily still have made me see stars…

He agreed that in a sense when he set foot on the Moon, he was in a way a space tourist ‘I’d like to have spent more time looking around as a visitor,’ he admitted, ‘but with only two hours on the lunar surface, it was precious little time to even accomplish what you were supposed to be doing.’

Being a keen student of things lunar, I just happened to have my Rand McNally map of the moon with me. Indeed, I had spilt coffee on the Hercynian Mountains while I was waiting for Aldrin to join me. And I had noticed a major crater called Arnold. But where were Aldrin, Armstrong or Collins?

‘There are three craters named after us,’ said Aldrin, ‘but they’re so small they wouldn’t show. They’re in the vicinity of our landing site. But of course anything on the nearside of any appreciable size has already been named. So our craters are very small. There are quite a number on the other side but they’re all named after Russians, because they were the first to send a satellite round the back of the moon with a camera.

‘One of the most beautiful sights when you leave the moon – we were in a close orbit around the equator – is the Tsiolkovsky crater. As you leave, you can look back at the backside of the moon at this beautiful crater named after the Russian rocket scientist and pioneer Konstantin Tsiolkovsky. It’s the most prominent crater on the far side of the moon.’

I showed Aldrin some newspaper cuttings recording his epic journey with Armstrong and pointed out that in one of them there was no mention of ‘Buzz’. He was referred to throughout as Edwin – his real name. ‘Well sometimes it was Edwin Buzz E Aldrin Junior, he said. (The second E stood for Eugene – his father had the same names. The nickname ‘Buzz’ originated in childhood: the younger of his two older sisters mispronounced ‘brother’ as ‘buzzer’, and this was shortened to Buzz.) ‘Edwin Buzz E. Aldrin Junior is unwieldy and always has been” he said. “So I legally changed my name, and my driver’s licence and passport are all just Buzz’.

There was an amusing sequel to this interview. When we’d finished breakfast, Aldrin said his (then) wife would like to meet me. She was still upstairs in bed, suffering from jet lag. Buzz and I made our way to the rickety old lift – and he searched for the appropriate button. His room, he thought, was number 50. But that didn’t correspond with any obvious floor. We ended up on the wrong one, searching for the right room. It suddenly occurred to me that the lunar module pilot of Apollo 11 had been unable to pilot us to his accommodation. This struck me as hilarious. It wasn’t his fault at all – the Halcyon lift system was not exactly NASA technology!