Cardiff in the Blitz 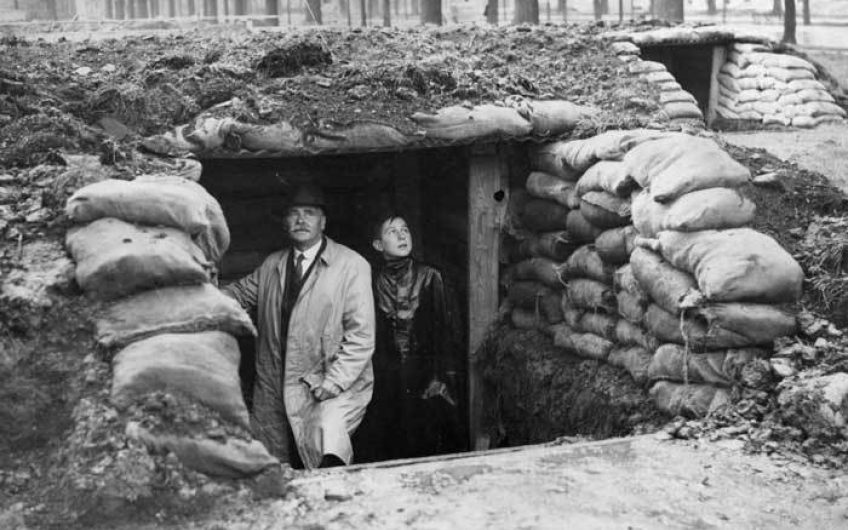 A couple taking shelter from the rain in Cardiff.
View Full Size
1
of 1

I was born in Grangetown, Cardiff, but we moved to a flat above a grocer’s shop in Penarth, South Wales, when I was a toddler. In about 1935 we moved to a rented house in Riverside, Cardiff.

When the war started in 1939 I was twelve years old and at school in Cardiff. We were each issued with a gas mask in a cardboard box. Our parents had to buy us waterproof coverings, so they wouldn’t get wet in the rain on the way to school. A brick-built, windowless shelter was built for us in the sports field adjoining the school and we were given one bar of plain chocolate to take with us in case of any emergency.

When the sirens blared we had to grab our gas mask and chocolate and sit on the concrete benches in the shelter. As sweets were hard to come by, it was very difficult to resist eating that one small bar of chocolate.

Many young people today don’t seem to know that during the blitz in the Second World War absolutely everybody was involved one way or another, not just those serving in the armed forces. For example, the disabled, arthritic 88-year-old who, with a stirrup pump and buckets of water, put out the fire caused by an explosive incendiary, which crashed through her roof on to the landing; or the thirteen-year-old girl next door to her, who scrambled over the iron railings (not yet taken for the war -effort) of a nearby park and gardens, and extinguished incendiaries by -frantically shovelling earth on to them with a -seaside spade, knowing that if she did not succeed the fires would guide the German bombers to the surrounding -residential area in Cardiff.

Ordinary people did not have telephones in those days and you couldn’t summon the fire brigade for each and every incendiary that fell and started a fire; the emergency services had enough of a job to deal with fires in large buildings where people had to be rescued after bombing raids. Civilians used to put out fires, and many people bought their own fire buckets and stirrup pumps. One had to be careful of anti-personnel bombs, such as phosphorous incendiaries that contained a thick, gummy substance which stuck to the skin and clothes. They burnt anything they touched.

Sometimes the water mains were damaged by bombing; sometimes broken pipes meant that the gas and water mixed together, so that when one turned on the tap an unusable white liquid would run out.

At about this time, explosive incendiaries gutted my school. When wading through the water in wellies to carry out salvage work, we were told not to touch the remaining walls in case they collapsed on us. Two of my friends had already perished when a ship evacuating them to Canada or the United States was -torpedoed by the Germans. When my parents refused -permission for me to go I felt furious, although in those days children did not dare show such feelings to their parents. It did not strike me until afterwards what would have happened to me if they had agreed to my wishes.

On the same morning that my school was destroyed I heard that the friends we used to play cricket with in the street had all been killed. That same night my youth club was flattened by a bomb blast, as was my Sunday school.

My dad was a bit eccentric and a fatalist. He had been invalided out of the Royal Navy at the end of the First World War. He had joined up in 1914 at the age of sixteen. We were in the Park Hall cinema in Cardiff one night, when bombs started dropping. A large number of city-centre buildings – offices, shops, restaurants and so on – were -destroyed. People huddled together to shelter under the -cinema’s balcony, but Dad and I preferred to walk home, picking our way over the rubble and firemen’s hosepipes, with shrapnel falling all around. There were shoes scattered on the pavement in front of the wrecked Dolcis shop in Queen Street. The air was full of smoke and dust. But walking with Dad I had no fear.

After our home was weakened by bombing, we walked over a city bridge each night to sleep either in the concrete basement of some still-to-be-built flats in Westgate Street or within the thick, draughty walls of Cardiff Castle. We each took a blanket or eiderdown with us. So many families had been bombed out that we learnt to sleep fully clothed, sitting up on the bunks provided. I remember how cold it was in the winter. There was snow, and no heating in the shelters or at home. We couldn’t light a fire at home because the chimney had caved in.

Possessions of any value were looted, including Dad’s medals. Claims for war damage could be made, but my -parents, like so many others, believed it was patriotic not to make a claim. Street dealers would come around after a bombing to see what they could buy (or just take). Families such as ours were desperate, since when you obtained alternative accommodation you couldn’t take large items with you.

The only accommodation we could find was the (illegal) subtenancy of a council house. We did not stay there very long as so many of the few belongings we had managed to save -disappeared. We moved quickly when the tenants were out at work. My mother’s pride and joy was a grand piano, but she had to sell it to one of the roving dealers for shillings.

Despite the shortages, mothers grudgingly used some flour, lard and a few spoonfuls of precious powdered egg and sugar to make birthday cakes. We did not have coupons for additional ingredients and there was no icing sugar, but we would always enjoy a friend’s birthday party.

My parents had moved my bedroom to the ground floor for safety. At night when the big anti-aircraft gun went off, the eiderdown on my bed would rise in the air and then sink back down again. Blast was so unpredictable. In the middle of my windowsill I had a giant glass bottle of Woolworth’s eau de Cologne. When a parachute landmine dropped nearby and the window was blown in, including the window frame and some surrounding bricks, the bottle of eau de -cologne was left intact and undamaged.

One day recently as I was walking through a local bookstore, I was suddenly taken back to my childhood. A small -Penguin paperback caught my eye – a reprint of Aircraft -Recognition, first published during the war, and illustrated with official silhouettes and photos of aeroplanes, enemy and friendly, seen over British skies.

That book brought back some happy memories I had -forgotten. I must have been about thirteen; we all had a copy of that book – it must have cost just a few pence then. At school we were told that if we saw a plane, we should rush for shelter or fall to the ground. None of us did; we always had that little dog-eared book with us. We thought we were all experts, and we would get so excited and call out, ‘Look! That’s a -Messerschmitt!’ or ‘It’s OK – it’s one of ours!’ We could identify them all, even at night when we could see only the -silhouettes shadowed against the sky. Standing at our front door during the day in Riverside, fascinated, we would watch the German fighter planes machine-gunning the barrage -balloons above us in the sky.

Proust, the perfect lockdown book, and his best translator – AN Wilson