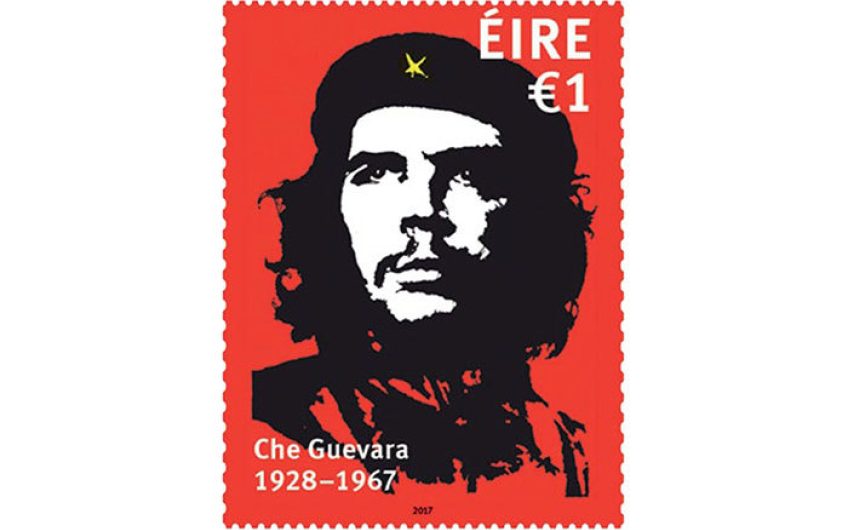 The revolutionary, executed today in 1967, ended up on an Irish stamp thanks to his chance meeting with a 16-year-old barman in a County Clare hotel in 1962. John McEntee talks to that barman, creator of the iconic poster, to celebrate St Patrick’s Day

Eyebrows were raised in October 2017, when the Irish government issued a one euro postage stamp bearing the image of Che Guevara.

It marked the 50th anniversary of Che’s violent death in Bolivia. What on earth did the charismatic, brutal, guerrilla have to do with the Emerald Isle?

What the Cuban exiles may not have known was that Che remains an honorary Irishman. His real surname was Lynch: in the 18th century, his great-great-great-great grandfather, Patrick Lynch, came from Galway to Argentina, where he became a big landowner. After Guevara was killed by Bolivian special forces in 1967, his father, Ernesto Guevara Lynch, said, ‘The first thing to note is that, in my son’s veins, flowed the blood of Irish rebels.’

The iconic red and black poster of Guevara, which adorned a million bedsits in the Sixties and Seventies, is even more Irish. It was created by Irish artist Jim FitzPatrick, now 71.

FitzPatrick, best known for his Thin Lizzy and Sinead O’Connor album covers, made the image in 1968, the year after Che’s death.

The original photo – known as ‘Guerrillero Heroico’ (‘heroic guerrilla fighter’) – was taken in 1960 in Havana by Cuban photographer Alberto Korda (1928-2001).

FitzPatrick’s design made the obscure revolutionary a worldwide icon. It has led the march in demonstrations around the world. Art historian Professor Martin Kemp put it at number six in the ten most iconic images of all time (the ‘Mona Lisa’ is number one).

The story of his creation of the famous poster makes for a very Irish tale. ‘Often, no one believes that it was me,’ says FitzPatrick.

When the young FitzPatrick’s father left home, the family was forced to sell their house in Skerries, just north of Dublin, and live with relatives.

Their new home was damp, which led to the ten-year-old FitzPatrick contracting pleurisy and spending nearly two years in a sanatorium.

While he was recovering, his mother dispatched him to relatives in breezy County Clare on the Atlantic coast. Aged sixteen, he was working as a barman in a family hotel in Kilkee, County Clare, near Shannon Airport, when Che Guevara walked in.

Che’s flight was fogbound at Shannon. It was 1962 and Shannon was one of the few airports providing a regular service to Moscow and Havana. Che was accompanied by two Cubans. He ordered an Irish whiskey.

‘I recognised him immediately,’ recalls FitzPatrick, who had used his recuperation to read comprehensively. ‘I was only about sixteen. I wasn’t expecting to speak with Che Guevara. I asked him vaguely about his roots, because he told me his granny was Irish. His great-granny, Isabel, was from Galway, but he told me his ancestors were from Cork.’

Five years later, when Guevara was killed in Bolivia, FitzPatrick came across the photo that Korda, Fidel Castro’s ‘official’ photographer, had taken of him. Using the ‘line drop’ process, he outlined Guevara in black on a red ground. He coloured in the yellow star with a felt-tipped pen. He raised Che’s sightline and added his initial, a disguised, reversed ‘F’, on the shoulder.

It was an instant international hit. FitzPatrick never sought money for the poster, which he distributed, copyright-free, via friends around the world. ‘It would be like taking blood money,’ he says. ‘I just wanted to make sure he was not forgotten.’ Korda didn’t get copyright at the time either, as Castro didn’t believe in it. But now, with Korda dead, and his heirs asserting their rights, FitzPatrick has realised it’s time to make sure that Cubans benefit from the image of their iconic hero.

With FitzPatrick’s Che appearing on everything from T-shirts to cigarette boxes, posters to tea towels, he now wants to control the copyright – but not for financial gain.

He released the image, still copyright-free, for use among revolutionary groups in Europe and elsewhere. In 2011, he began his effort to rescue the copyright, planning to hand it over in perpetuity to the Cuban people.

Initially, FitzPatrick wished to donate to their hospitals, but then realised that Cuban hospitals are so advanced they could teach the Irish a thing or two. Instead, he says he would give any rights money to Guevara’s 80-year-old widow, Aleida, and the Cuban people.