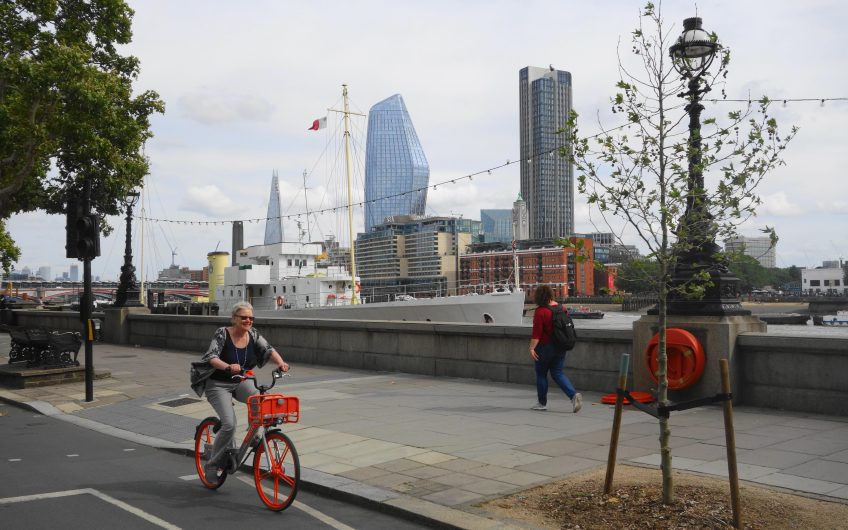 Londoner Jenny Bardwell roamed the south coast looking for a way out of lockdown. She ended up buying a house in a place she had never heard of, near Hayling Island, where she had never been.

I was born in Barnet, raised in Purley, and lived in bedsits and flats in Zones 1 to 3. After 15 years, I thought I would hang on in Sutton – probably to the end. In leafy Sutton, I could revel in my 60 plus Oyster card (I was so thrilled when it arrived). But then, it lay on the cabinet unused for months.

Like most people in lockdown, my husband and I trotted around the same green spaces in rotation, with one or two novel discoveries to sustain us. Explorers of the green belt, we ticked off Horton Country Park and Mitcham Common while Shirley Heath beckoned.

When our house sold unexpectedly quickly in November last year, My Right Move scrolling turned from a mindless, relaxing activity, to an urgent mission. I widened the search and then narrowed it, went above, then below budget, hoping to hit gold. Whatever the search, it always included Chichester. In the 1960s and 70s if we were ever on holiday in the area, my father loved to hear evensong in the cathedral. With one of my first pay packets as an office junior, I stayed at The Ship and saw The Importance of Being Earnest with Ian Ogilvy as Jack at the impressive Festival Theatre. But until now, I have turned my nose up at provincial life and, like Madam Bovary aching for Paris, usually could not wait to get back to the smoke.

Apparently, some folks have ‘FILTH’ emblazoned on their t-shirts (‘Failed in London Try Hastings’). Well, I have got another one - ‘CAC’ (‘Can’t Afford Chichester’). ‘Bognor is Cheaper but Bugger That’ is not quite so neat.

Last winter was a strange one when our main social contact was with estate agents and house viewing was a (legal) chance for small adventures like a paddle in Worthing on a sunny Christmas morning. But property wise, there was very little to tempt us, especially as we had to clear our mortgage and hang on to (now) essential office space. One bargain in Emsworth had been erected in a back garden and no vehicle could get within a hundred yards of it – including a removal van. A square pink cottage out of a picture book had a bit of garden – which belonged to the pub next door. The converted corner shop forced kicking and screaming into a three bed and a house which had been extended piecemeal with strange excrescences as if a child has been let loose with the Lego. I thought a whole section might break off while I was having a shower. Unsold houses were remarketed at lower prices, so we accidentally viewed one dark studenty dive twice in central Chichester and had to pretend to be interested all over again, while another masked agent waited patiently outside.

In many cases, our Sutton semi was far quieter. One beautifully renovated house was tragically marooned between the competing roars of the A27 and the A3.

We were lured down to Selsey by a pair of converted railway carriages and stepped into an interior straight out of Agatha Christie. It was unclear how it all joined up and I had visions of us getting older and becoming trapped upside – escape only possible with the aid of a giant can opener. One smart house virtually adjoined an electricity generator and on the other side was a huge field lying in wait for another housing estate.

We put in an offer on an Edwardian semi in Angmering with a neglected roof which was rejected, but all the time we were edging closer to that hinterland of tolerable compromise.

Then, just when it started to look as though we would have to rent or head for Norfolk, an unusual town house in Langstone with a wild wet garden turned up.

The agent told me “The first time you look with your heart and the second time with your head.” I thought I would rely on my eyes for both visits - and my imagination – could I imagine living there? Yes!

I rolled around on the carpet transfixed by the golden wallpaper, like a blissed out pussy cat relieved to be home at last.

So, no need to look at Right Move any more but, as you know, it can be a hard addiction to crack, and so I still treat myself to the occasional glance. A striking windmill conversion with spectacular views? A Georgian pile within the city walls?

I never thought I would become a riparian in later life “is that a religion?” my God daughter asked. No, but as riparians we must replace a rotten bridge and keep the Lavant Stream flowing freely through our back garden.

I recently boarded the train at Havant to get down to Waterloo (not for a show, but my second jab at St Thomas’s) and I told myself that I now lived in Zone 22.

Two lives among tens of thousands propelled on to a new path by the pandemic.

“Where exactly is Langstone?” People now ask me - to which I reply, “well it’s near Chichester, but a bit cheaper”.

Jenny Bardwell - Reaching for the stars - in their dressing rooms