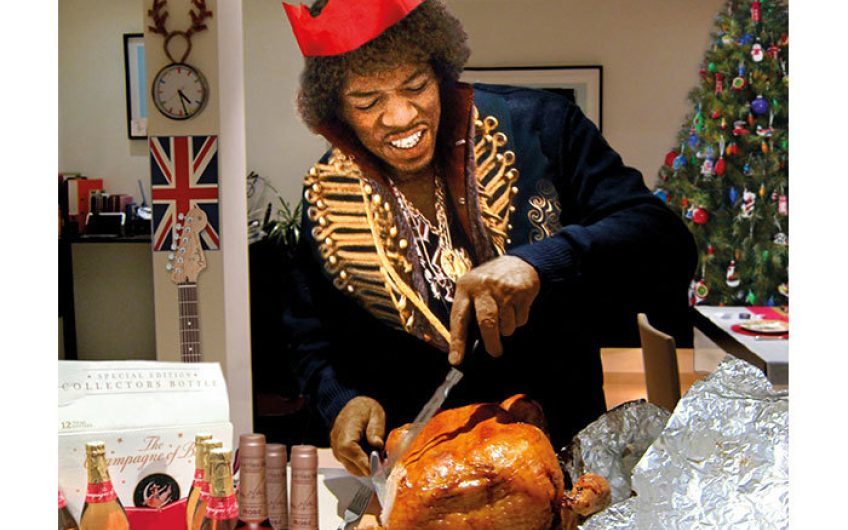 Just over half a century ago, I had the most extraordinary Christmas imaginable – when Jimi Hendrix came to my London flat for a lunch that went right on into the early hours of Boxing Day.

As a photographer in my twenties in the 1960s, I was lucky enough to be in exactly the right place at exactly the right time. I first met Jimi in September 1966, when Chas Chandler, the bass player with the Animals, called me up. He said he had an amazing black guitarist from America staying with him. Chas needed some photographs taken, as he was considering producing and managing him in the UK.

I arrived at his Soho office and met this rather quiet, hilariously dressed, young guy with an Afro, by the name of Jimi Hendrix. We chatted for a while and found that we had a great deal in common. He was buzzing with music and I was obsessed with photography.

We were also both fascinated by science fiction – in particular, Isaac Asimov, and Walter Sullivan’s book We Are Not Alone, about the search for extraterrestrial intelligence. I assure you that with what we were smoking in the 1960s, you could easily believe there were beings living on other worlds.

I also began to realise that, when talking with Jimi – although he was listening and involved in the conversation – he was also elsewhere in his head. Around thirty per cent of his mind was always listening to music.

Dates were set for the first photo session at my London studio in Great Newport Street, off Leicester Square. It’s there that we shot the cover of Jimi’s first album with Track Records, Are You Experienced. The first session was shot in black and white. Because Chas rejected this session, I shot a second set in colour, and the cover was chosen from this session.

During the recording of the album at Olympic Studios in Barnes, west London, I shot the band at work, with Chas producing.

When I arrived, the band had laid down some tracks – one involved phasing and music played backwards. Jimi stood me in between the speakers and played a track. I was absolutely blown away. This became the title track, ‘Are You Experienced?’.

One evening, after a long recording session, five or six of us piled into a taxi and headed off to a party we’d heard about somewhere in Maida Vale. When we arrived, the building was going up and down with heavy rock music, packed with people, dancing and carrying on. The hosts, delighted to see Jimi, led us into a side room where there was a large, old-fashioned sideboard, laden down with many kinds of drink and drugs.

Standing in front of this array, Jimi said to me under his breath, ‘You see this – I can’t go anywhere where it isn’t laid out for me.’ If you think about it, who in their right mind would invite a premier rock star and not have some goodies on offer?

I got a call from film director Peter Neal, who wanted to film Jimi and the boys being photographed. He arrived at my studio with a Dutch film crew and shot some footage of me at work, intercut with some of my best portfolio images. It was used in the film Experience. Also at this same session, Jimi – using a borrowed twelve-string guitar – recorded the classic track ‘Hear My Train a Comin’.

Jimi was booked to appear at the Monterey Pop Festival in California in June 1967. As I partly lived in Los Angeles, and Jimi wanted me to be there, I flew out to cover the event. Monterey was the first big rock festival, the template for all those that followed. It was truly a love-in. The atmosphere was fantastic and the hippies and young people were having the time of their lives.

The line-up included Eric Burdon and the Animals, Simon and Garfunkel, Otis Redding, Ravi Shankar, The Who, Janis Joplin, the Mamas & the Papas, and, debuting in America, the Jimi Hendrix Experience.

I was shooting during all three days of the festival, on stage and backstage. I was chatting to Noel Redding when Janis Joplin approached us and asked, ‘Can you give me a cigarette, honey?’ She exchanged the cigarette for a couple of swigs of her Southern Comfort.

Meanwhile, Jimi was painting one of his white guitars with black, swirling patterns. At the end of his performance, he set fire to this guitar and broke it into pieces.

There was a rivalry between Jimi and The Who as to who would follow whom. He told no one he would set fire to the guitar; he wanted to make sure his stage performance outshone The Who’s. I was standing on a chair, left front of the stage, looking back at the crowd. They were absolutely mesmerised by Jimi’s electrifying performance.

In November 1967, when I was shooting PR shots of Jimi at Sweeney Todd’s, the Chelsea hairdresser, I asked him if he had any plans for Christmas.

‘Will you be going home to Seattle to see your family?’ I asked.

‘No way,’ I said. ‘You’re coming to spend Christmas with my family and friends.’

So Jimi came for Christmas lunch at my flat on the Gray’s Inn Road, near Holborn. It was on the first floor, overlooking a tiny alleyway. It was all a bit rundown, but it was handily near Fleet Street, then the hub of publishing, and I could be there with my photographs in no time.

I remember the party in full swing. Jimi was sitting in a huge, carved oak chair, when Raven, a beautiful, young hippie girl, arrived. Raven had come over from America with her boyfriend to dodge the Vietnam draft. When Raven saw Jimi, she was so overwhelmed that she fell on her knees in front of him – almost an act of worship. I could see that Jimi was terribly embarrassed as he helped her up from the floor.

There were about twelve of us there, including Mike Smith, lead singer of the Dave Clark Five, and his girlfriend. Jimi chatted away with him about music; he was very sociable, talking to everyone.

My wife, Laird, cooked us a wonderful lunch of turkey with all the trimmings. It was 16 lbs – so we didn’t eat till 4pm. Jimi had asked a few days before if I could get hold of some Mateus Rosé, and I duly complied. We drank quite a bit – and we were also very stoned.

Sadly, I didn’t take any photos of our lunch. I couldn’t have worked the camera, even if I’d tried! But today, both sets of beads are on show at the British Music Experience in the Cunard Building in Liverpool, wrapped around the Hasselblad camera I used to photograph Jimi on that album cover.

And so that lovely Christmas Day went on and on – with us talking and listening to music – right until the early hours of the next day.... Some lunch!

Cardiff in the Blitz

Diary of a new student – aged 62. By Nicola Foote