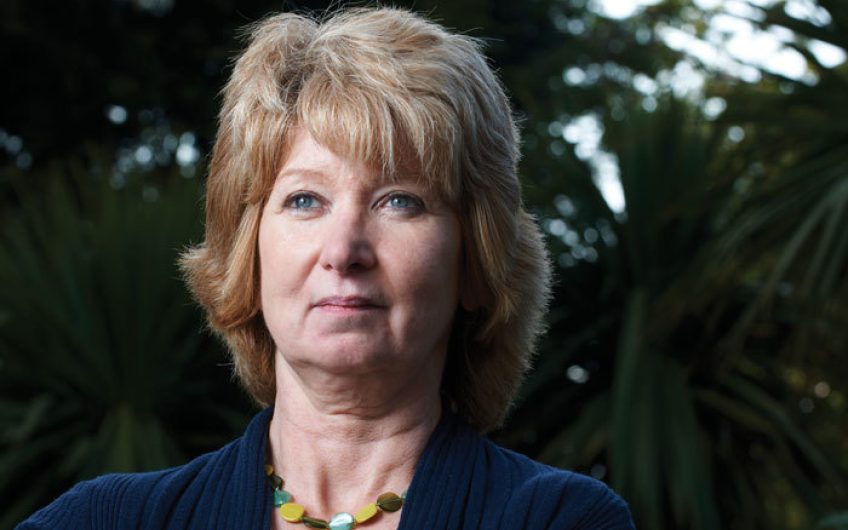 Eileen Chubb witnessed a terrible scene when she was seven years old. She and her family lived on a council estate in Abbey Wood where her mother had a close friend, a Jamaican woman from the only black family on the estate. One day as Eileen was outside playing, she saw the Jamaican woman knocking at a neighbour’s door. ‘Can you ask your children not to bully my little girl?’ she said to the woman who answered. The response was vicious and swift. Two other women appeared and the three of them kicked and beat the woman as her little girl stood by crying. Eileen screamed, alerting her mother who ran fearlessly to her friend’s assistance. It made a profound impression on Eileen.

Eileen left school at 16 and got a job at the bakery where she had been a Saturday girl. She was soon promoted to a managerial role and stayed for twenty years, but then in 1996 she felt restless. Aged 36, with little idea of what she wanted to do, she applied for a care assistant’s job in Isard House, a residential home in Bromley where she then lived. ‘I loved the job from the first instant,’ she says. ‘There is a great satisfaction in knowing that you’ve made somebody feel safe and cared for them properly and it’s certainly more satisfying that trying to sell doughnuts.’

It would have stayed that way, but two years into her new career, she witnessed scenes of brutality and sadism that would dramatically alter the course of her life.

‘When I went into that care home I thought I lived in a civilised country,’ she told me recently. ‘I no longer believe that. It was like a concentration camp, somewhere where life no longer had any value. People think evil doesn’t exist. It does. I’ve seen it – a joy taken in the pain of others. Some people go into the care industry because the victims are there – people who can’t say what’s happening to them.’

She had been working at the 65-bedroom care home run by BUPA for eight months when she began to be suspicious. In August 1997 she went on holiday having been assured by her line manager, Maria Keenaghan, that three particularly vulnerable residents would be well looked after. ‘When I returned, one of them was dead and the other two had urine burns on their skin,’ says Eileen. In the following months Eileen catalogued the horrors she witnessed and reported them to a senior manager who told her not to talk to anyone else about it so that they could build a case. ‘They were pulling people, pushing them over, grabbing them, dragging them along, pulling their hair. People were covered in bruises, left in bed from 8pm until 4pm the next day without drink or food, soaked in urine and faeces, their skin starting to break down.’

The manager gave a resident called Edna massive overdoses of the anti-psychotic drug chlorpromazine, which rendered her virtually comatose so that her face fell into her food. ‘Edna had been in a mental institution since she was 14. She’d had a dreadful life and had no family. She was so glad to have her own room when she got to Isard House,’ says Eileen, her eyes filling with tears. Another she remembers vividly was a Dunkirk veteran whose catheter had been left to overflow back into his bladder. The care worker in charge said she’d change it after Coronation Street. He told Eileen that if he’d known what the end of his life was going to be like he wouldn’t have swum to the boat that rescued him during the War.

It transpired that six other care workers had also been informing the manager about the abuse, and, like Eileen, had been told to say nothing. These people, who became known as the BUPA Seven, went public at great personal cost to themselves, reporting the abuse to social services whose investigations upheld all the allegations.

But their working lives were made hell. They were spat at, their wages partially delayed from one week to the next and Eileen was physically attacked – rammed in her back with a chair. She trusted management at first, until it became clear that BUPA would do everything possible to protect its reputation rather than its residents or its workforce.

The seven signed off sick. They went to an employment tribunal, which spent two years dragging out the case. Eileen was learning how the world really works. ‘The key line was in the tribunal’s summing up. They said we had not sufficiently considered the consequences to ourselves before we made our disclosures.’ Two years later there were press reports that more people had been abused in the same home. ‘After all we had done,’ says Eileen, ‘it was still not enough.’ BUPA continued to employ some of the perpetrators who went on working with old people.

Eileen bought a copy of A Guide to The Law for £2.99 and got their case to the High Court when all else had failed. When BUPA arrived at court with thirty lawyers and PR experts, she knew she didn’t stand a chance.

But she wasn’t beaten. ‘The last thing I said to the manager at Isard House before I left was “There’s no compassion in care”’. So ten years ago Eileen set up the charity Compassion in Care. She visits care homes under cover, having learned the business of disguise from a group of actors she met along the way. Her husband, landscape painter Stephen Honour, helps her out. A former fire-fighter invalided out of the service after being injured, he has a small pension which they live on. ‘Our charity’s total budget over ten years is £48,000, so you can imagine the little we get by on. I can’t believe how much we’ve done with that. We’ve got a pack for training people about abuse, we’ve worked with different commissions, we’ve worked with Merton Council trying to get abuse policies improved. I’ve got hundreds of letters from people all over the world who have given us a donation and said please keep doing what you’re doing. Pensioners send us fifty pence and that is the best compliment we could have.’ The charity gets hundreds of calls and emails from whistle-blowers and distressed people.

Under the heading ‘Tales of the Uninspected’ on the charity’s website, is a roll call of some 120 care homes, giving descriptions of Eileen’s visits to them. Each is numbered, though not named to avoid libel actions, but she passes on the names to people who ask. She has visited 330 in all. She doesn’t recommend care homes to callers because they can change overnight, but she advises on what to look for. The roll call on the website must inspire fear and dread in the care home industry.

Compassion in Care has a sword as its emblem: ‘It’s a sword of protection,’ says Eileen, ‘but it will come down on your head if there’s abuse in your care homes and you’re not doing something about it. We’re feared – and rightly so.’

For all her fighting talk and courage, Eileen, an attractive blonde in her mid-fifties, is a gentle, humorous woman who says she is terrified before confronting MPs, judges and senior management types or being interviewed on TV and radio. You wouldn’t know it. Highly articulate, she has, in her crusade to defend the most vulnerable amongst us, taught herself enough about law and policy to enable herself to launch into complexities that would boil the smartest brains. The little girl who saw her black neighbour suffer racist abuse has become a respected public figure, an avenging angel and a scourge of abusers and corrupt managers.

Beyond the Façade by Eileen Chubb, Chipmunkapublishing, £15

Vera Lynn stars in a new exhibition. By York Membery

IN PRAISE OF EDMUND CRISPIN, MASTER OF THE OXFORD SLEUTH - Lindsay Johns