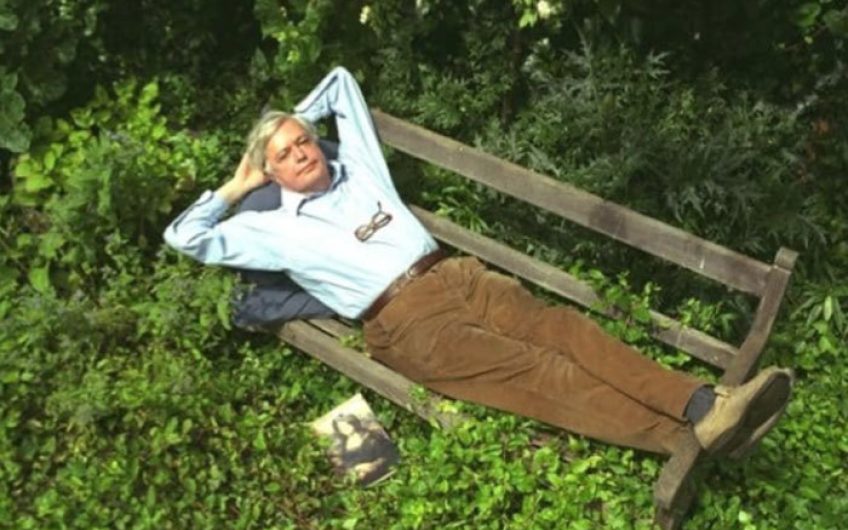 Alexander Chancellor, the late, great editor of The Oldie, died five years ago. Craig Brown pays tribute to his friend

No more that laugh, that wonderful, infectious laugh, that laugh that told you that life was essentially a comedy, and nothing mattered quite as much as people thought it did.

People keep calling it inimitable, but that never stops them trying to imitate it. Gyles Brandreth described it as a giggle, Taki as a screech. Charles Moore thought it was like a schoolboy imitating a machinegun, the journalist Jemima Lewis like a duck being tickled. It reminded the Oldie publisher, James Pembroke, of Muttley’s laugh from Wacky Races.

It was always unwise to take Alexander at his own estimation – he was almost clinically self-deprecating – but, if it’s true that he never quite grew up, then the rest of us were the beneficiaries. And, to the very last day of his life, Alexander retained a child’s capacity for delight, a child’s sense of mischief, a child’s curiosity.

There has been a lot of talk since his death about what made him such a great editor, but I think those three qualities lay at its heart. And, like a child, he had a restless need to be entertained, a dread of being bored.

‘I hope this isn’t too boring,’ he would say to Simon Courtauld as he handed in his own piece for that week’s Spectator, usually a second before the printing presses were due to roll.

And, of course, it was never boring. He had a beautiful style, relaxed and mellifluous, yet also taut, so that, for all its easy-going, conversational feel, there was never a word wasted.

He also possessed that God-given gift, rare in anyone, let alone a writer, a gift that can’t be taught: the gift of charm.

Without making a song and dance about it, Alexander was a contrarian – perhaps even the contrarian’s contrarian. Has there ever been another Spectator editor, in recent times, who was happy to admit that he had never once voted Conservative? And he employed vagueness as others might employ a rapier.

‘Remembering names is one of the great American achievements,’ he wrote recently. ‘I still don’t know how Americans do it, or, indeed, why.’

He went into journalism because, he said, it was ‘the ideal profession for the lazy person’. But was Alexander really lazy? He certainly liked to be thought so, because he never shed that schoolboy terror of being considered ‘too keen’.

So, dreary qualities like hard work and diligence that lesser writers and editors parade, he kept hidden, like a guilty secret. His contemporaries were happy to go along with this ruse. Richard West once wrote a parody of Alexander’s timetable:

11am: Lose article by Solzhenitsyn.

And there is the famous story of the representatives from the American Spectator coming over to England to study the magazine’s working methods. After a week’s hard study, they told Alexander how amazed they were at the extraordinary amount of time everyone spent at lunch.

‘But how else could you fill the day?’ Alexander replied.

This reply would, of course, have been accompanied by his usual chorus of laughter. But the lunches, the enjoyment, the fun, were all part of his armoury. Beneath it all, that brilliant mind never stopped whirring. More puritanical editors, priggishly insulated from the world outside, had nothing of Alexander’s verve and excitement.

Who else, in the entire history of journalism, would have invited Kingsley Amis, Peter Ackroyd, Barry Humphries and the former American vice-president Spiro Agnew to the same office lunch, cooked and served by the redoubtable ‘Fat Lady’, Jennifer Paterson?

As Simon Courtauld, an eye-witness to the great event, recalls it, Barry Humphries nipped out towards the end and reappeared as Dame Edna Everage.

‘ “We should be having a glass of ouzo together, Spiro!” Dame Edna cooed, putting a bare arm around his shoulder. “I would like to describe our meeting today as the Agnew and the Ecstasy...”

‘The great tax-evader knew it was time to take evasive action. He mumbled his thanks and made off down the stairs at an impressive pace. Dame Edna followed, waving her handbag and calling lustily for Spiro to wait for her.’

From the fun and mischief sprang by far the most interesting and enjoyable magazine of its day, and Alexander continued with his own legacy when he took over the wheel at The Oldie.

Graham Greene called him the best editor he had ever worked for, and hundreds of other writers would agree. ‘What made him a good editor?’ asked Ian Jack in the Guardian. ‘Partly a knack for finding good writers and recognising interesting ideas; partly his textual skill – contrary to the dilettante image, fostered by three-bottle lunches and sixty Rothmans a day, he could often be found late at night changing captions and rewriting headlines, but mainly he was good because he won loyalty from his staff and contributors.’

‘He was a completely wonderful editor’, says the journalist Geoffrey Wheatcroft, ‘even if we couldn’t always understand why he was. We loved him.’

As editor of The Oldie, he was loved and respected – two words that don’t always go together – as much as ever. He enjoyed heated political discussions with his sub-editor, Deborah Maby – well, not heated exactly, because Alexander was a stranger to heat – but intense political discussions with Deborah, who is, by nature, more radical than Alexander. In one of these discussions, Deborah protested that The Oldie couldn’t just stand by during the Israeli bombardment of Gaza.

‘I don’t agree,’ said Alexander. ‘Standing by is exactly what The Oldie does best.’

Deborah loved working for Alexander. She says: ‘What I really loved about him was that he never stood on ceremony. I could say whatever I liked to him and he never took the attitude that so many newspaper section editors would, i.e., who do you think you are having opinions; you’re just a sub. He was genuinely interested in things and ideas – so he wouldn’t care about who you were; he was interested in what you had to say. He was completely without snobbery in that way. And he was never, ever once cross with me about anything. If a mistake went in, I would apologise and he would insist it wasn’t my fault. “You can’t be expected to check everything,” he would say.’

Liz Anderson, who worked for him on the Spectator and The Oldie, had the same experience. ‘I never saw him in a grumpy mood – ever.’

On being appointed editor of The Oldie at the age of 74, Alexander had written, ‘Here was one job – possibly the only job in the world – for which at my age I felt I could possibly apply. I look forward to thinking once more about things other than poultry [Alexander kept ducks and chickens at his Northamptonshire home].’

Yet, once again, this was his self-deprecation at play. In truth, Alexander was a lot closer to Cincinnatus than Old Uncle Tom Cobley. I remember him coming back from America a year or two ago, buzzing with having masterminded some deal or other to boost The Oldie circulation over there. This was not the attitude of an amateur or a faintheart.

Over the past few days, I’ve been looking through my emails from Alexander, going back seven years. They are all so characteristic: he was always, delightfully, himself. Most of them are about lunch. The first, from years ago, named a time and a restaurant and ended, ‘Be there or be square.’

He sent the last at 8.50pm on the evening of 27th January. I had heard that he was in hospital, and had suggested dropping round, or, if he wasn’t up to it, sending some flowers.

‘Dear Craig,’ it begins. ‘Are there any of the Oldie of the Year winners you might care to write about? Am in Chelsea and Westminster. Not too serious, they don’t think, but might need an op. Wouldn’t visit, if I were you, though it’s a v kind offer. Flowers might make me look too swank in the ward. What made Alex Shulman leave Vogue? Got bored, I would guess. Love to you both. Alexander.’

It’s a typical Alexander email: a little bit of work, no self-pity, a funny, self-deprecating joke (‘Flowers might make me look too swank in the ward’), the gossip about the comings and goings of the world and the suggestion that all sane people are in flight from boredom.

He died the next morning, aged 77, still at the top of his game. He will be missed dreadfully by his family and his friends, but, under Harry Mount, his spirit of mischief, intelligence and bonhomie will live on in The Oldie.

This is an edited version of the eulogy at Alexander Chancellor’s funeral at the Church of St Mary the Virgin in Stoke Bruerne on 10th February, 2017