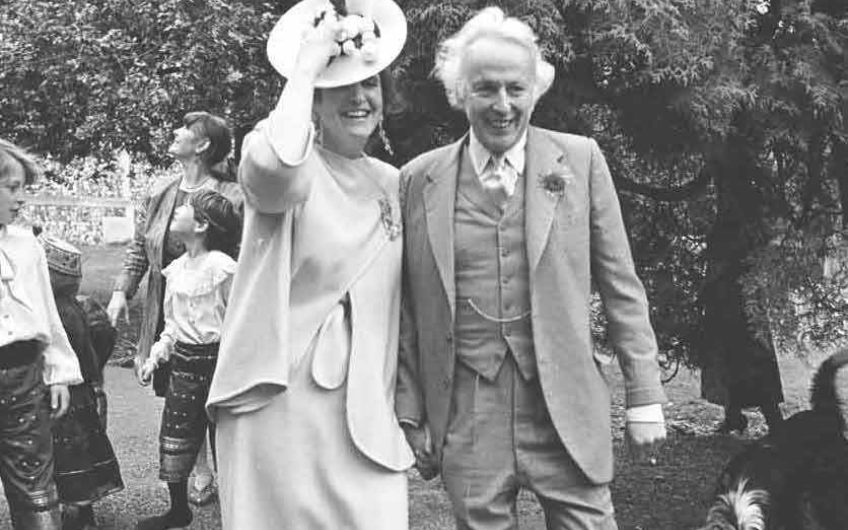 Lucinda Lambton and Perry at their wedding, Hedgerley, Buckinghamshire, 1991
View Full Size
1
of 1

Perry was my sweetheart – my handsome-as-a-man-can-be, beloved sweetheart.

When we met, he asked why I had fallen in love with him and I answered without hesitation that it was because of his elegance of mind and manner.

So it was and so it most dashingly continued to be, these qualities delighting me for every one of the 30 years of our marriage. My admiration for him glowed with a tremendous pride that never dimmed one jot.

He was a clever, fearless and original thinker, as well as being a consistently good, kind and sympathetic man. What a particular delight it was never to be disappointed or let down by even a shadow of the second rate, while always feeling able to rely on his wisdom and understanding. At the same time, it must be said that he certainly had some controversial views!

Our lives together – our listening to thundering classical music in front of the fire, writing and walking in the countryside with four dogs – were pretty perfect.

Good fun was had when he relished pricking the pomposity of those who deserved it, which gave him enormous pleasure. Smiling in a particularly satisfied way, he would gleefully rub his hands together, delightedly crowing, ‘I’ve got them now, Luce – I’ve got them now!’

Dozens of letters have arrived, jam-packed with praise.

‘What a marvellous life he had,’ wrote journalist Xan Smiley. ‘And what fun and pleasure he gave to so many people; most of all friends but of course also to the thousands of delighted readers. He had such style in words and in the flesh.’

Writer Ferdy Mount declared, ‘Perry had been a joyous part of my life for more than half a century. Other people will recall his fondness for saying the unsayable and wearing the unwearable. But I treasure most of all his kindness and heartfelt courtesy, especially to young people who were unsure of themselves – such a rare quality.’

His son, Oldie editor Harry Mount, wrote, ‘I didn’t know anyone like him – taking contrary views with an amused and amusing level built into them.’

Our friend Will Wyatt declared Perry to be a ‘a wonder … such a provocateur and such a handsome dandy… We rejoiced to have that silver hair, the pink shirt and pink trilby in our garden. He and I must have disagreed about many things but it never felt like that when we talked. He steered the conversation to fields of interest to us both.’

Hurray – a thousand hurrays – that he was so liked and admired.

A most curious aspect of his personality was his having little interest in matters aesthetic – paintings, architecture etc. They virtually passed him by. While realising this was shamingly unacceptable, he would nevertheless come out with such remarks as he made on our honeymoon, amidst the glories of the pink rocks of Utah: ‘God got here first before any architect.’

And, with my interest in buildings, he applied himself with zest, first realising what transformative wonders could be created, with – eureka! – an adobe multistorey car park in Santa Fe! It genuinely delighted him.

For someone who claimed no artistic sensibilities, he instinctively turned out as a fashion plate.

He was forever garnering praise for his appearance. Once in Spain, a whole restaurant, to the last man, stood to clap on his departure! Bowing and smiling with delighted surprise, he raised his pink-ribboned straw hat, gratefully acknowledging their applause, while wearing down yet further the large hole in the crown, already frayed at having been raised so many times for the ladies.

One friend, James Williams, wrote, ‘Without a doubt, he was the most stylish man I ever met and, even the last few times we saw him, he exuded distinction – no mean feat in your pyjamas!’

They were, of course, pink.

His manners were peculiarly good: once in the middle of a quarrel, in a grim diner in Massachusetts, I was sitting up at the counter, when an angry, cigarette-smoking slag appeared over my shoulder from the kitchen.

‘A woman!’ thought Perry. Manners to the fore! With a supreme effort, he managed, contortionist–like, to bow and to force forth a winning smile for her amidst our quarrel. The slag was demolished in seconds.

He was game for many sprees, such as listening to old-timer Cajun fiddlers in Louisiana, with tears rolling unashamedly down his cheeks as he saw the French faces of their Acadian ancestors who had settled in America in the 1750s.

I loved him with all my heart. I gave him thousands of kisses every day, while always being so very grateful and proud that I was his wife.

It's June in Cambridge – so it must be May Week!