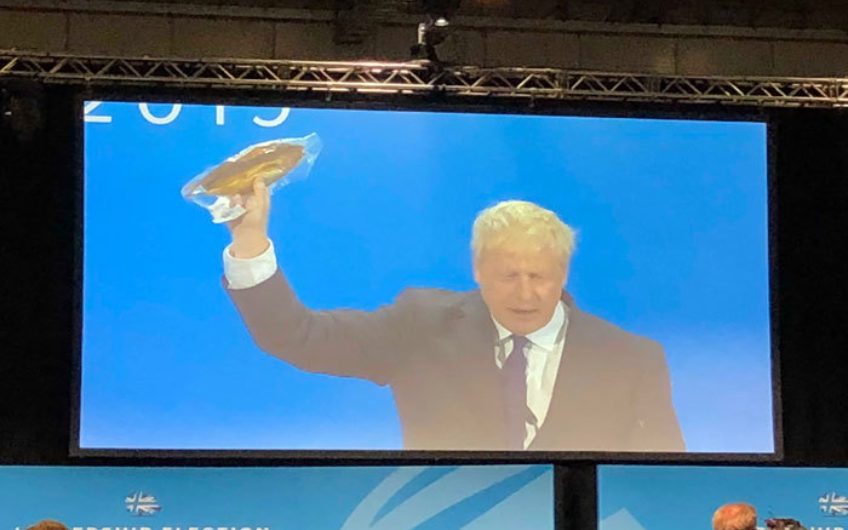 Last week, two western blonds held court. Across the pond, the somehow-leader of the free world Donald Trump led a rally with what looked like tens of thousands of supporters. In London, the kipper-brandishing Boris Johnson went toe to toe with Jeremy Hunt at a rather more modest Tory leadership hustings.

It took place on Wednesday night at the Excel centre in East London. My neighbour observed that the last time she was there the centre had hosted an Arms Fair. And so it did again.

The 4,500-strong audience of conservative party members was by far the largest of the contest’s sixteen hustings. Fittingly so for Iain Dale, desperate to crowbar a good gag in nice and early, who called it the final of ‘Tories Have Got Talent’.

The audience was not what most would imagine of the Tory party membership. A few hours before, I had mentioned the evening’s plans to a friend – a very liberal millennial – who swore blind that 85% of the room would consist of stale pale males and gammons. Not so. A very diverse crowd: representatives of all colours, creeds and backgrounds. But perhaps most astonishing was the number of young people there. The London factor I suppose.

After some introductory remarks from Iain Dale and Brandon Lewis, the Conservative Party Chairman, Liz Truss came on to introduce the prospective PM – ‘a blond in a world of bland’ – Boris Johnson. Boris-convert Helena Bunberry introduced Hunt. The usual praise ensued, but Liz Truss put her foot in her mouth when she described Boris’s management of the Olympics as having ‘put London on the map’. Really?

It being my first hustings, I foolishly expected a bit more variety of opinion. There was none. Just style. Heart and head.

Boris was heart. He had the props, he had the gags and, of course, he had staggering self-confidence. Hunt was much more measured. He always had a fact, or at least a statistic to hand; he focused on the questioner, always looking for a name-check; but his speech just wasn’t memorable.

Boris used a kipper to illustrate the wastefulness and inefficiency of the EU, even though the law he cited does not feature in EU law, he made an appalling pun about Mars bars – preceded by a much better joke about the risks of not having sufficient whey and glucose to produce the ‘Mars bars on which our children depend!’ – and he accused Corbyn of wanting to pluck the feathers of Britain’s private sector to such an extent that the great British bird goes into a downward spiral. A nonsensical allegory but bizarrely memorable!

The body language was particularly telling. Boris made sure to look at every corner of the room, arms sweeping, clenched fists randomly gesticulating all over the room – involving the whole audience. Hunt seemed to give his entire focus to the questioner and would gesticulate towards them. It gave all his answers a grating sincerity.

At the event, Hunt was more fact-focused and on balance probably the better candidate. And yet people drained out of the hall during his Q&A. Why? He was too generous, too respectful of Boris, while Boris was dismissive of him – not mentioning his name once, just calling him ‘the other candidate’ – and worst of all he took criticism at face value.

When criticism came his way, Boris grunted a laugh and shrugged, seeming to not understand how he could merit it. Everyone was on his side.

Boris will undoubtedly be the next Prime Minister. As one of the questioners asked, Boris has ‘Brexit in his gut’. Hunt retorted by saying he has democracy in his. Not so, it is in his head. He is measured and intelligent and no doubt a great politician, but too sincere.

Boris is the opposite. We think of him as Boris, not as Johnson. He is enthusiastic. He uses fantastic like Trump uses great.

At the end of his Q&A Iain Dale asked Hunt which trait of Boris’s he would have if he could. Hunt’s answer? The ability to always leave a meeting with everybody smiling. And Boris certainly managed that.

The day Charles II was restored to the throne