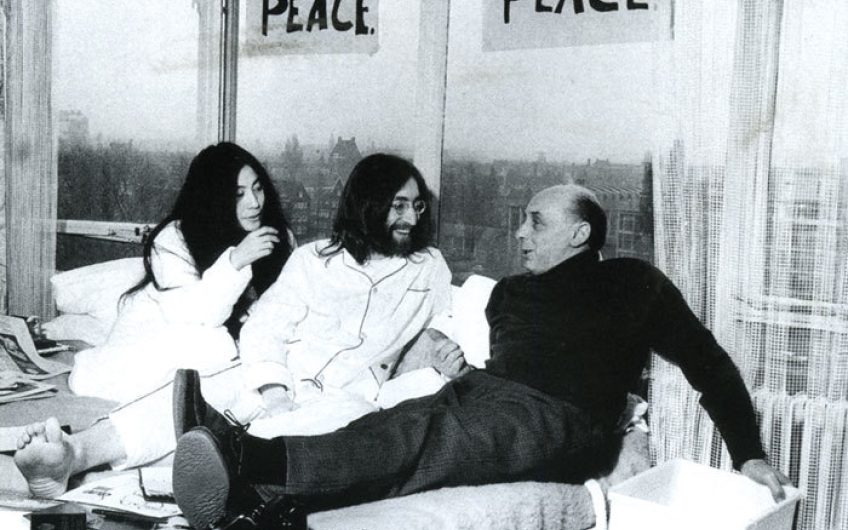 John Mcentee remembers the straight-talking journalist, who has died at 102. He told the truth about some of Hollywood’s biggest egos and still managed to stay friends with (most of) them

He numbered Charlie Chaplin, Marilyn Monroe and Cary Grant among his friends, inadvertently offended Frank Sinatra and once took delivery of three dozen toilet rolls from Mario Lanza: the message read ‘Dear Donald – these foolish things remind me of you. Love Mario.’

Virtually all the stars Donald Zec wrote about in a prolific career as a show business journalist are now dead. But Donald remained alert and engaged in his flat in Holland Park.

A small, bald, nutlike figure with an imperious gaze and an infectious grin, he lunched regularly at Postino on Kensington High Street. But unlike lesser figures from the golden age of Fleet Street, he didn’t like talking about himself or his Hollywood friendships, scoops and triumphs.

His books include a memoir of his cartoonist brother, Philip Zec, and lives of Lee Marvin, Barbra Streisand, Sophia Loren and James Bond producer Cubby Broccoli.

His own memoirs were entitled Put the Knife in Gently (a remark once made to him by Kirk Douglas). He also wrote an earlier tome called Some Enchanted Egos chronicling his bloodless skirmishes with Elizabeth Taylor and Richard Burton as well as Omar Sharif, Tony Bennett and many others – his entertainment column in the Daily Mirror was syndicated worldwide.

I first met him about six years ago when Keith Waterhouse, another admirer, brought him to a journalists’ lunch at the Coq d’Or in Earl’s Court. He had recently lost his beloved wife Frances and proudly circulated a photo of the late Mrs Zec in her prime to the gathering. Our next meeting was at Keith Waterhouse’s funeral, where he belied his age by clambering up two flights of stairs for the champagne wake in a riverside pub.

Donald was born of Russian immigrant parents in a street that now forms part of the Marylebone underpass. Failing in his ambition to be a professional violinist, he got a job as a copy boy at the Evening Standard before moving to the Mirror in Manchester. He served with the London Irish Rifles during the War.

Returning to the Mirror, he was appointed crime correspondent and had tea with John George Haigh hours before the notorious acid bath killer was arrested. They met in the Onslow Court Hotel, from where Haig had lured his last victim, a rich widow, to her rendezvous with a bath of acid.

‘The police were already outside the hotel when he poured the tea saying “Shall I be Mum?”’ Donald recalled. ‘I had tea with him knowing that the police had evidence that he not only killed people, but drank their blood.’

From crime, he became royal correspondent – ‘which I thought was a natural progression’. He had a mole in the Buckingham Palace boiler-room who revealed details of the birth of Prince Charles, and how he had been told to put six hot-water bottles in the Queen’s coach so she could keep warm on the way to Westminster Abbey for her coronation.

He then found his natural muse as the Mirror’s Hollywood correspondent. In contrast to today’s budget journalism, money was no object. Donald was billeted in the Beverly Hills Hotel in a suite laden with gifts and inducements from press agents. Humphrey Bogart invited him to a stag weekend on board his yacht, sailing round the Californian coast: they formed a real friendship. He was also fascinated with Marilyn Monroe, who was a lot more pleasant than some of the stars he knew – Elizabeth Taylor told him: ‘You know you are a s**t,’ and Sinatra sent him a telegram when Zec wrote something ‘that fell a little short of hero worship’, saying ‘I thought you were my friend, but as of this morning, you blew it.’

His tongue loosened by his favourite claret, Donald would talk about his encounters with James Dean, Jane Russell, John Wayne and Mae West. But he never boasted or bragged: he talked about them with fondness as absent friends.

In an age when Hollywood stars are controlled, rationed and manipulated by press agents, studios and bullying PR companies, Donald Zec embodies what it used to be like. No modern journalist can hold a candle to him. He told his readers the truth. If a star like Jane Russell made a flop film, no amount of pressure from the studio or her press agent would induce Zec to describe it as anything other than a turkey. He combined truth-telling with the capacity to remain friends with the stars. No one wrote as elegantly or with as much insight as the little bald man born of Russian immigrants on the site of the Marylebone underpass.