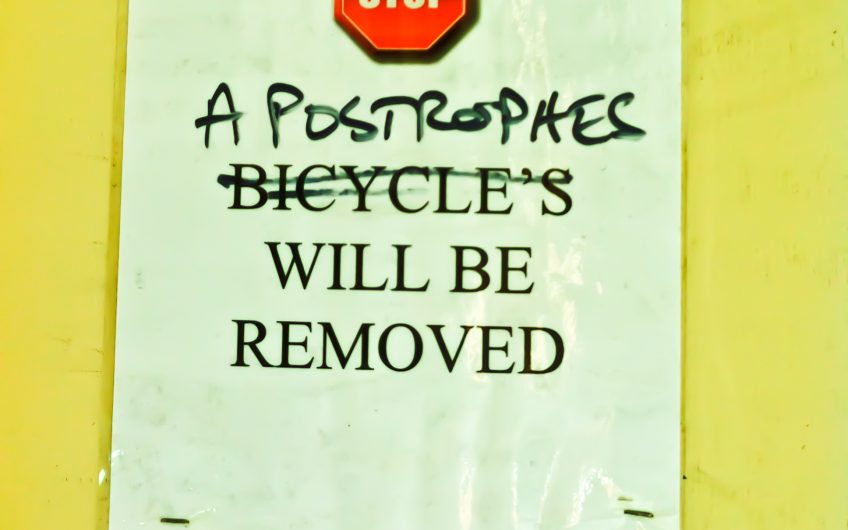 The Apostrophe Protection Society closed in 2019 because 'ignorance has won'. And now its founder, John Richards, has died at 97. The Oldie will never give up on the crucial little sign, says editor, Harry Mount

Say it ain't so! John Richards, the venerable 97-year-old founder of the Apostrophe Protection Society, has died. In 2019, he closed down the organisation because, he said, 'The ignorance and laziness present in modern times have won.'

Not here at The Oldie, they haven't. We will always defend Pedants’ Corner – or is it Pedant’s Corner? Or perhaps just Pedants Corner? We grammar fanatics often get attacked for pedantry – by the way, I’m so easy-going that I think all three versions are fine, though I prefer the first one.

And I can see why we’re attacked – no, I don’t mind starting a sentence with “and”, either. Grammar wars can get far too obscure, when you end up asking things such as which girls’ names are the nominative female singular of a Latin gerundive (Amanda, Miranda). Or should that be girl’s names?

But there’s one aspect of grammar that’s wonderfully simple and easy to learn. It was only while researching a talk on punctuation a few years ago that I realised quite how few elements to it there are. Putting aside a few really obscure punctuation marks, the 15 main elements are: the full stop; colon; semicolon; comma; apostrophe; quote marks; question mark; exclamation mark; round brackets; square brackets; hyphen; dash; asterisk; ellipsis and slash.

Most of these are pretty easy. Even people with dodgy grammar can use practically all of them pretty well – if anything, they use exclamation marks too much. It’s mainly the comma and the apostrophe that let people down. Yes, the colon and semicolon can get pretty hairy but, if you’re not comfortable with them, they’re easy to swerve round.

The apostrophe gets wickedly abused – and not just by grocers. The comma is underused, particularly in its agile capacity as a throat-clearer, a pause-provider and direction-marker in a sentence.

Just look at Churchill’s famous speech – and one of his longest sentences – without the merciful assistance of the comma (and the odd semicolon, admittedly): 'We shall fight on the beaches we shall fight on the landing grounds we shall fight in the fields and in the streets we shall fight in the hills we shall never surrender and even if which I do not for a moment believe this island or a large part of it were subjugated and starving then our empire beyond the seas armed and guarded by the British fleet would carry on the struggle until in God’s good time the New World with all its power and might steps forth to the rescue and the liberation of the old.'

Without commas, Churchillian prose loses all its careful pacing – and you’re lost, too.

You can argue till you’re blue in the face about the importance of gerunds, participles and other tough grammatical territory. (Incidentally, I’m in the camp that thinks it’s better to know these things than not to know them.) But punctuation is different. It is the sine qua non of language.

Punctuation, more than anything else, turns the written word into the spoken word inside your head. Know your punctuation, and you can magically signal to the reader of your writing when to speed up; when to slow down; when to make the prose flow; when to give it a stop-start, staccato rhythm; when to pause; when to trail off into ellipsis…

Where some grammatical questions are confusing – anyone for periphrasis? – punctuation is a simplifier and a clarifier of language.

Punctuation seems more complicated than it is because of some of the names used. But something like that Oxford comma, which shouts out its exclusivity and complexity, is in fact extremely easy to learn – and to teach. There’s no reason why every child – and every grocer – in the country shouldn’t know it.

If you really want to, you can make punctuation into a complicated game played in Pedants’/Pedant’s/Pedants Corner. Consider the question of placing a full stop at the end of an abbreviation, as in “etc.”. Even the keenest grammarians won’t insert a full stop into a word that’s abbreviated in the middle, such as hrs for hours or Mr for Mister.

But what do you do about two-letter abbreviations for American states? Surely Virginia – abbreviated in the middle – should be simply VA? And shouldn’t Massachusetts – abbreviated at the end – be “MA.”? And what about the two abbreviations for versus? Kramer v. Kramer and Kramer vs Kramer are both right. But the 1979 Dustin Hoffman film wrongly called itself Kramer vs. Kramer. Still, what a delight for all of us in Pedants’ Corner (pedants plural, there).

Germaine Greer - How I bought my Cambridgeshire home

My time in bandit country