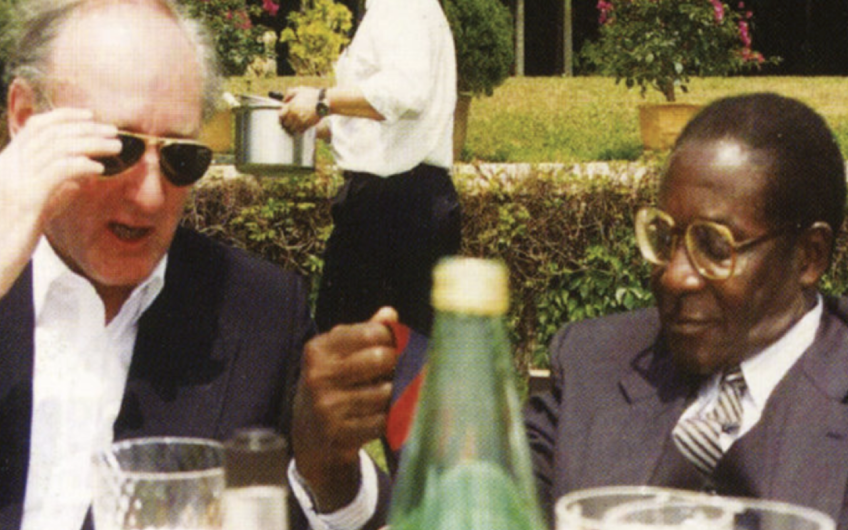 As the formerly Zimbabwe leader dies at 95, Algy Cluff recalls his dealings with the President's predecessor, Robert Mugabe

After President Robert Mugabe attended a banquet in his honour at Buckingham Palace in 1994, I asked him to visit my Aberdeenshire house to discuss how I was to raise the money to develop a large new gold mine in Zimbabwe.

And so it was that Air Zimbabwe made its first and only stop at Aberdeen Airport with three passengers – Mugabe, the then High Commissioner and an ADC.

I had arranged for a piper to serenade him on his arrival at the house. When the piper finished, Mugabe turned to my wife, Blondel, and said, ‘Unless I am mistaken, this gentleman has an ostrich feather on his head, under his arm he is squeezing the gut of a dead animal and he is wearing a skirt. And yet they call us primitive!’

His dry humour impressed me and set the scene for the next two days of negotiations. I had got to know him fairly well, having been the first (and, for some time, the only) foreign investor in Zimbabwe after independence in 1980. It was my duty to maintain a dialogue with the Zimbabwean government to protect our shareholders’ interests. I formed quite a favourable impression of him.

I was repelled by Ian Smith and his henchmen who made, quite unnecessarily, the unilateral declaration of independence in 1965. Smith made one of the more fatuous political statements of the 20th century: ‘I don’t believe in black majority rule ever – not in a thousand years.’

Mugabe, who led freedom fighters battling against Smith, spent many years in detention, during which time his only child at the time became ill and died. He was never allowed to visit the ailing child or attend the funeral. (Still, Mugabe later behaved with dignity and charity, allowing Smith the freedom to criticise him.) I detected a similar lack of charity and common sense from the white business and farming community, to whom Mugabe was the Antichrist.

I used to see him at State House, the presidential residence in Harare. He told me that, wherever he went in the rural areas, black farmworkers said, in effect, ‘We have fought and won a war about our land. Where is it?’

He told them to calm down and be patient, as the white farmers were earning the foreign exchange to enable hospitals and schools to be built. In the 1980s Zimbabwe had a free press, but the country had a chronic, constant shortage of foreign exchange. The Reserve Bank of Zimbabwe was a misnomer; it was a bank devoid of reserves.

Instead of agreeing that the notion of 5,000 whites owning 75 per cent of the best land was untenable and offering to hand half their land over and to train Africans to become agriculturalists, the white farmers did nothing. The British government also promised money for the country in the 1979 Lancaster House Agreement, but none of it was delivered.

Our government could have defused the developing tensions in Zimbabwe, but preferred to be supine. Mugabe became increasingly frustrated – and solitary. When I had lunch with his minister of defence, Richard Hove, in Hong Kong’s Mandarin Grill (he had a penchant for Havana cigars the size of ballistic missiles), he said Mugabe had begun to brood and was always alone.

There was a drastic change when Mugabe’s first wife, Sally, died of kidney failure in 1992. We had no more friendly chats. My colleagues and I suggested listing the shares in our local company on the Harare stock exchange, vesting 20 per cent in the hands of the mineworkers and appointing the first African chief executive of any mining company in Africa. Mugabe was unimpressed.

In 1996, our company discovered the largest gold deposit in Africa (in Tanzania) since the Second World War. Ashanti Goldfields, in Ghana, made an unwelcome offer, which was accepted by our largest, Hong Kong-based shareholder. Our board had to accept.

This enraged Mugabe. On my last visit to State House in March 1996, he stalked into the room, brandishing the offer documents, clearly in a foul mood. The chief executive of Ashanti, failing to gauge Mugabe’s mood correctly, thanked Mugabe for allowing us to make this courtesy visit.

‘Discourtesy visit!’ Mugabe shot back, launching into a tirade against capitalism and the mining industry.

‘I thought you had the best interests of Africans at heart,’ he raged at me. ‘You don’t – all you care about is profit!’

He threw us all out and beckoned me into an anteroom, where he stood alongside a soldier, covered in hand grenades and machine guns. He was clearly about to give me another torrent of abuse; so I walked out, only to find someone had sent my car away. I had to walk the two miles back to my hotel, with the uncomfortable feeling I was being followed by the machine-gunner. That was the last time I saw Mugabe.

Tyrannical he undoubtedly became, although he retains heroic status among many Africans. His first wife played an important role in his victory, whereas his second wife, Grace, played the pivotal role in his downfall.

His first wife was educated, whereas the present one is not – and has been largely responsible for encouraging him to adopt his regal attitude and to disregard the economic realities of life in Zimbabwe. She has a lot to answer for.

Diary of a student, aged 62 and three quarters. By Nicola Foote