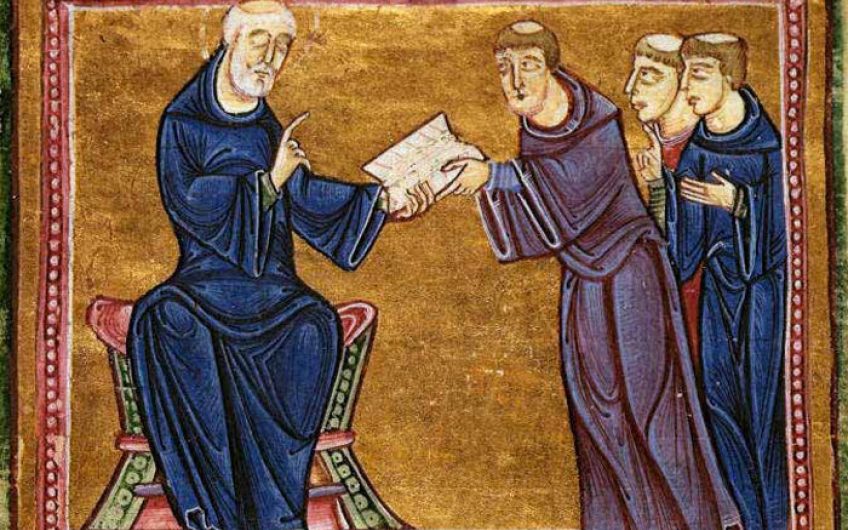 In the world of the echo chamber, the ideal place to be is somewhere where your company never bothers or challenges you.

The sixth-century document known as the Rule of St Benedict firmly turns this upside down. Other people are the God-given context for you to learn who and what you are as a human being.

Patient faithfulness in a shared life of prosaic housekeeping is the path to the life we were made for. Fantasies of heroism and holiness need to be shelved while we learn the basic skills of attending to the variously annoying and unco-operative individuals we’re stuck with.

We have practically no idea who Benedict (c. 480-547 AD) really was. There is a life of him written by Pope Gregory the Great but scholars agree this is largely pious guesswork, stringing together a few traditions preserved in some central Italian monasteries.

Benedict would have taken a grim satisfaction in this obscurity. He is, he says, writing the most basic of guides for monastic communities, a bog-standard introduction to holy living which respectfully recognises that some people end up being mystics and saints. As he mordantly points out, though, no one becomes a mystic or a saint without learning to do the gardening and the washing-up along with the other members of the community – and doing so without rivalry, resentment or carelessness.

Benedict describes these skills of common life as the ‘tools of good works’ – a telling image.

The community is a workshop where we get used to handling the raw material of shared life in such a way that what emerges is robust and fit for purpose. What is being ‘made’ in the workshop is souls – bodily human beings who understand themselves with growing clarity and are engaged in creating a durable life together.

The authority exercised by the head of the community involves developing an instinct for each member’s distinctive gifts and needs, so that no one is subjected to unrealistic pressures.

And the superior is reminded – rather startlingly, given the very stratified society of the sixth century – that, in public discussion of the issues of community life, the most junior is as much worth listening to as anyone else and may have a more helpful perspective than a senior’s.

So the Rule deals with the five-finger exercises of disciplined life. No Trappist silence but no encouragement to spend time chatting or gossiping. No spectacular fasts but a sensible and regular diet. Put the dishes away when you’ve washed them so that the kitchen supervisor knows where they are. Take one book out of the library for Lent and read it from cover to cover.

From time to time, the dry realism of Benedict’s analysis of human weaknesses breaks through: all the books say wine is an unsuitable drink for monks, but ‘modern monks cannot be persuaded of this.’ Just keep a sharp eye on your consumption.

The rhythm of common prayer (which involves reciting the complete Psalms every week) and physical labour (cooking, market gardening, house maintenance) creates an ambience, says Benedict, that others will want to share: ‘There will never be a shortage of guests in a monastery.’

The ingrained habits of mutual respect and patience prepare the community to cope with the stranger at the gate and be thankful for the chance to be hospitable.

These days, we glibly talk about tolerance and respect for diversity. Benedict is describing a community able to see the Saviour in one another and in the superior who keeps you all attentive to one another; who is free to see him in anyone who arrives knocking at the door. It’s a seasonal remembrance of that poignant moment in the Christmas story where there is ‘no room’ for Mary and Joseph in Bethlehem.

It’s not surprising that this supremely practical handbook rapidly became the standard guide for religious community life in Western Europe. Anyone who has ever stayed in a Benedictine monastery will recognise the ethos today.

There have been periods of laxity and corruption, scandals and failures. Benedict would have put these down

to losing sight of the basic vision – commitment to making the common life work; being appropriately modest about your own contribution; accepting a realistic oversight of your progress from a sharp-eyed, sympathetic authority; holding one another to account.

In recent years, these things have led to a new appreciation of the Rule and books on how to apply it in the routines of marriage and family life; even in business or politics.

The principles are clear enough, and necessary enough, as material for obvious New Year resolutions. Attend. Take time. Learn from one another what your strengths and weaknesses are. Accept that your neighbour is not going away.

And – crucially for Benedict – a reminder that grace always comes before and after discipline: ‘Never despair of the mercy of God.’

The liquid chocolate beauty of the Elgin Marbles - Harry Mount

The end of the political cartoon?