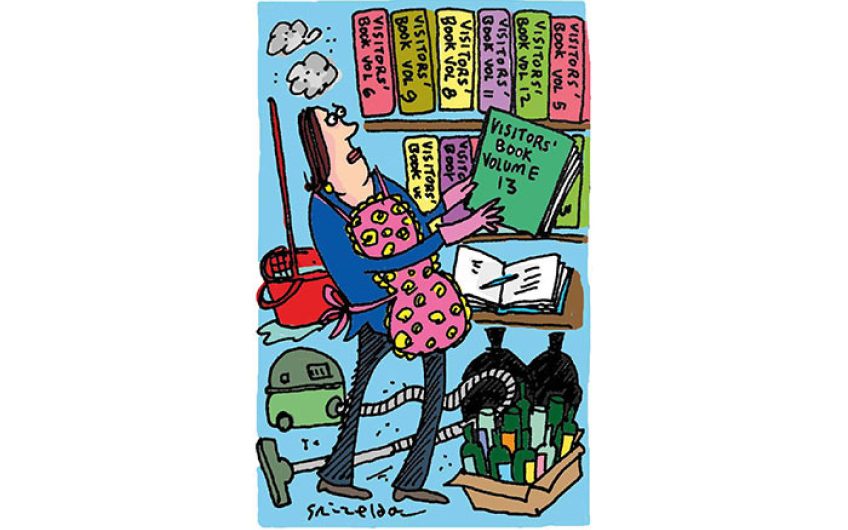 I didn’t know, when I moved to Newlyn, Cornwall, that there is an art to having house guests. My godmother says they go off like fish in two days and are to be avoided.

But my husband and I were thrilled with our five bedrooms – we left a small Camden flat. So, with a mixture of grandiosity and insecurity, we invited everyone we knew. Winters are wet and long here; no one comes. Let the world come to us in summer – and they did.

This Christmas, they won’t be coming.

The problem is no two households are the same. We all have our peculiar rhythms, systems and habits. It’s hard to present guests with a list of laminated rules that must not be broken. I know someone who does this, and he’s a pleased host. So here is my list of rules for the perfect guests.

I’m not tidy but I dislike squalor

I can’t believe some people put used nappies in the kitchen bin or leave them on the floor of the bathroom; or leave puppy pads in the wastepaper basket in the study. I can’t believe they over-fill the bin, so that I’ll have the joy of wrestling with it later; or that they leave recycling by the kitchen door, so I can pick it up.

Be helpful to the host

My childhood was, among other things, a directive to tidy the sofa cushions. When I stay at people’s houses, I cook meals, wipe worktops, stack dishwashers and sweep floors. My friend’s mother in Ireland calls me ‘the maid’.

Hotels exist to infantilise – but I am not a hotel. Most guests don’t understand this. They let dirt settle – what’s it got to do with them? – and appear in the kitchen only for meals.

My favourite guest was a mother of five, who washed the kitchen floor and cooked her own meals. She can come every year.

My least favourite was an old university friend, a mother of four, who let her children draw on the walls, flood the bathroom (at 6.30am) – ‘Get a wet room,’ she suggested when I complained – and pull up my husband’s seedlings.

She didn’t clean the house – but she did walk on my mopped floor and let her dog excrete all over the place. When I pointed this out, she said, ‘You told me to bring him.’

With one guest’s family, from Somerset, I wanted the children to watch The Railway Children. The mother suggested Jaws 2, where many children are eaten.

I like my son to have sugar once or twice a week. The Somerset mother fed her children sugar from breakfast to midnight. I found her three-year-old on his back on the kitchen floor, sucking chocolate milk out of a bottle.

So my son had the same diet – injustice trumps obesity avoidance. By the end of the week, his clothes did not fit him. When they left, he begged for vegetables, which I think surprised him.

We are not babysitters

Another guest, from Kent, went to the beach with my husband and three of the children.

She disappeared for almost an hour, meaning that my husband had to prevent the younger children from knocking over other children’s sandcastles, and the older children from going nearer the surging, Storm Ellen-powered sea. She returned with a new wetsuit, and the phone number of the shop owner.

I suggested it might not be a good idea to meet random people during a pandemic. She suggested a compromise: she would shag him on the beach (or, if wet, in a car park), while her most touching child sat on the end of our bed, spraying himself in his mother’s perfume and asking us if we loved him.

Treat our neighbours with respect

Cornwall isn’t London and infractions will be remembered for generations.

The manager of the local pizza restaurant said one of our guests, from Sussex, had left, saying to the waitress, ‘Here’s something for you.’ He handed her what turned out to be not a tip but just a scrap of paper. My husband had to pay the tip to preserve his honour.

On another occasion, the astonished fish merchant knocked on our door at breakfast to ask, ‘Was the car parked in the clearly marked LOADING ONLY bay anything to do with us? It’s stopping our lorries getting fish on board.’

Of course, it was our Sussex guest: he thought his disabled parking permit was a licence to park in the middle of the road.

The Sussex man did leave us a parting gift – an evil glass fish which, one of his children said, his ex-wife had given him. I am, then, landfill, too. I wanted to throw it out, but my husband said no.

It lives on his mantelpiece – a reminder of the terror of guests from hell.