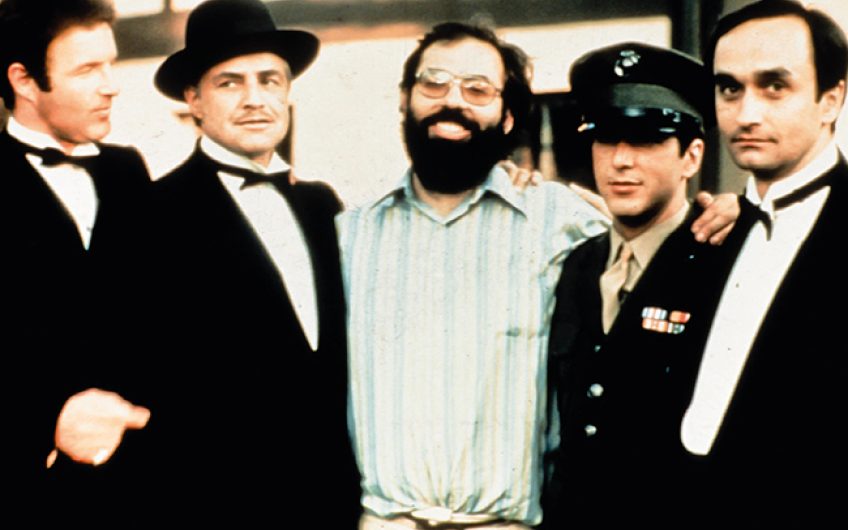 It’s a gangster movie, a family drama and a film about the corrupt American dream, all rolled into one masterpiece. By Tom Ward

Early one morning in January 1971, a young film director sat waiting nervously with a skeleton film crew in a sitting room on Mulholland Drive.

Everyone was silent – the target of their mission, they had been told, did not like noise. A camera had been set up, a few bits of prosciutto and cheese placed on a table.

Finally, the owner of the house entered, wearing a long Japanese robe. Without acknowledging anyone, he sat down. As the camera began to whirr, he tied his long, blond hair up in a pigtail, applied black shoe polish to it and filled his cheeks with cotton wool.

‘This man is a bulldog,’ he murmured to himself, with a strange, hoarse rasp. Muttering wordlessly, he picked at the food, stared up at the ceiling, scratched his cheek, gestured at imaginary people. The phone rang. He answered. He wheezed incoherently for a few seconds, then hung up. Whoever was at the other end, puzzled as they no doubt were, was a small part of film history.

The director, Francis Ford Coppola, had just recorded the first screen manifestation of Marlon Brando as Don Vito Corleone in The Godfather. By the end of the year, Coppola would have created one of the most acclaimed and influential films ever made; and Brando, after a lost decade of self-indulgence both off and on the screen, would have restored his shattered reputation and once again be called the greatest actor in the world.

Watching The Godfather now, 50 years after its première at Loew’s State Theatre, New York, on 14th March 1972, it seems completely self-assured – a tour de force of confidence and virtuosic swagger.

But for Coppola, making it was ‘the most miserable part of my life’. From development to the final cut, via the script, casting, cinematography and score, all of which are considered today to be more or less flawless, he fought continual battles with the studio and his own crew. Incredibly, for such an unproven director, he won on almost every front.

Coppola had not wanted to make the film. He had given up on Mario Puzo’s 1969 bestselling source novel after 50 pages, finding it vulgar.

A self-confessed ‘arty’ director, he was part of a new generation who wanted to get away from old-fashioned Hollywood filmmaking, and here, as Walter Murch, his longtime sound editor, put it, ‘was Hollywood at its Hollywoodiest’.

But he was in debt: his friend George Lucas urged him to take the money and then pursue more personal projects. Finally, he agreed – he had begun to see something in the story that appealed.

Paramount Studios wanted a sensational gangster movie steeped in gore and violence. Coppola saw it differently – both as an archetypal family drama about a king and his three sons and as a metaphor for the corruption of the American dream. The film’s power is that he ended up doing all three.

‘Making a major film is like running in front of a moving locomotive – if you stop, if you trip, if you make a mistake, you get killed – and The Godfather was worse than most,’ said Coppola later – and indeed the locomotive was roaring behind him from the outset.

Robert Evans, production chief at Paramount, had hired him partly because of his Italian heritage – ‘I want to smell the spaghetti,’ said Evans – and partly because he was a relative unknown who he felt would be easy to push around. He could not have been more wrong.

The two started fighting from day one. Paramount wanted the film set in the 1970s (cheap), and shot on their back lot (cheap again). Coppola was adamant it should be kept in the 1940s of the book, and filmed on location in New York.

This attracted the attention of the real mob – Evans got a call warning him not to make a Mafia movie in the city if he valued ‘your pretty face’. ‘Fuck you, buddy,’ said Evans, and then perhaps more thoughtfully added, ‘You should take it up with the producer [Al Ruddy].’ The producer’s car was found riddled with bullets.

Casting was even more divisive. From the beginning, Coppola wanted Al Pacino to play Michael and either Marlon Brando or Laurence Olivier to be Vito Corleone. Olivier was ill, and Paramount flatly refused to countenance Brando, whose outrageous on-set behaviour and string of recent flops had left him unemployable. Broke after the failure of his last effort, Burn!, the legend was mocked as ‘burned-out Brando’.

Coppola pleaded, was denied and, in his agony, faked an epileptic fit in the Paramount head office. Finally the studio made conditions: he would have to produce a screen test – a humiliation for a star of Brando’s stature.

Uncharacteristically desperate for the part, Brando acquiesced – hence the visit to Mulholland Drive. One story goes that Coppola slipped the test between some others and the studio owner, an Austrian called Charlie Bluhdorn, cried out, ‘Dat’s fantastic! Who is zis old Guinea?’ Brando was in.

Pacino was a different kind of problem. Evans wanted an established, all-American star – Robert Redford, say, or Ryan O’Neal. Pacino was dark, intense and short (Evans dismissed him as ‘the little dwarf’), and nobody had ever heard of him – precisely the qualities Coppola liked. Hundreds of thousands of dollars were spent on test after test, and Pacino kept flunking them, because of nerves.

Only after seeing him in a film about junkies called The Panic in Needle Park (1971) did Evans relent.

Once shooting began, Pacino’s troubles did not end, and neither did Coppola’s. Both were close to being fired in the first weeks of shooting. The daily footage sent back to the executives was everything they had feared. It was too dark; it was too slow; Brando was mumbling; Pacino was dull; there was no action.

‘They were convinced,’ recalled Coppola, ‘that this was the worst picture ever made.’

The crew thought Coppola slow and incompetent, and he was at odds with his director of photography, Gordon Willis. They had the same ideas about the look of the film, but Willis was ten years older than his director, and though his techniques were innovative, his approach to the process was not. He liked actors to hit their marks, say their lines as written, and find his precisely-placed lights. Coppola encouraged spontaneity and freedom.

Tensions rose until, one day, Willis walked off the set and Coppola stormed to his office. A sharp crack rang out. The crew stared – had he shot himself? Coppola had just kicked the door in.

Coppola and Pacino were hanging by a thread. Then along in the schedule came the now famous restaurant scene (actually, every scene is famous), where Michael shoots rival mobster Sollozzo and corrupt cop McCluskey.

A masterpiece of tension in its editing and use of sound – and with a compelling display of restrained anger, doubt, even horror from Pacino, despite his barely having a word to say – the scene is in many ways, with its low-key setting yet strange, otherworldly quality, a microcosm of the film itself.

Whatever, it dawned on the studio that they might be dealing with something rather good. From then on, both actor and director were secure.

But the fighting did not end, for Coppola at least. With shooting completed, he had been told to cut his 90 hours of footage to around two or have the film edited elsewhere. He brought it down to just under three: too much. Excising anything not plot-related, he managed to grind it down to the required length. Evans watched it – and was furious.

‘The fat fuck shot a great film, but it ain’t on the screen,’ he complained to Bluhdorn. Sources differ on what happened next. Coppola says he simply put back what he’d taken out; Evans claimed to have recut it himself and ‘saved the picture’. They were still arguing about it ten years later.

Crucially for the film’s success, the mood in front of camera was warm. The dynamic of the casting worked brilliantly for the story: the younger actors were in awe of Brando (Diane Keaton, when he introduced himself to her, stuttered, ‘Yeah, right, OK, good, fine, that’s OK’) and eager to impress him – perfect for their relationship to the Don.

Pacino was watchful and withdrawn, unsure of his suitability to the job, and keen on Keaton – perfect for Michael.

And Brando himself, with something to prove for perhaps the first time in 15 years, behaved impeccably. He is in only a few scenes, but that early screen test evolved into something that is now part of our everyday consciousness. As so often in his greatest roles, he seems both completely real and yet to occupy some space apart from everyone else. Only 47 at the time, not for a second does he fail to convince as a much older man. Brando stands at the interface between what might be called the classical and the romantic phases of acting – a transition he had effectively brought about himself.

Forget the Method: the much-imitated voice and mannerisms of Don Corleone are a magisterial demonstration from a brilliant theatrical actor – the kind of thing Olivier did so well.

But what Brando could portray more powerfully than anyone was pain. Watch the scene where he is told of his son Sonny’s death – the face almost pleading that he will not hear what he fears, his whole frame shuddering with grief, the final break in the voice when he says, ‘This war ends now.’ Paramount’s gangster flick is elevated to something very different.

Does the film romanticise its subject? Yes – the Corleones are represented almost as an order of knights, with a code of honour, loyalty, self-reliance and so on that goes a long way to explaining why it touches the American soul so deeply, regardless of Coppola’s intentions. Both Don Corleone and Michael are self-controlled, even puritanical in character; it is the hotheaded and oversexed Sonny who dies.

Of course, the Corleones kill people, brutally – but every victim is either disloyal, or themselves brutal. And, if we are honest, we want the Corleones to kill them.

Kingsley Amis was once asked what made Evelyn Waugh’s prose so good. ‘If I knew what it was, I’d be doing it myself, wouldn’t I?’ said the great man.

Analysing genius can indeed be a futile exercise, and The Godfather is touched with genius: Brando’s acting, Willis’s extraordinary photography – as black and white as a colour film can be – Nino Rota’s soundtrack (again rejected by Evans, won back by Coppola).

Above all, though, the film belongs to its young, nervous director. Under huge pressure, Coppola kept Puzo’s gripping story, drenched it with homely Italian detail and yet made something universal – a myth that teaches us how to make meatballs. A Celtic prayer in difficult times