Harold Nicolson, the diplomat who co-created Britain's most famous garden 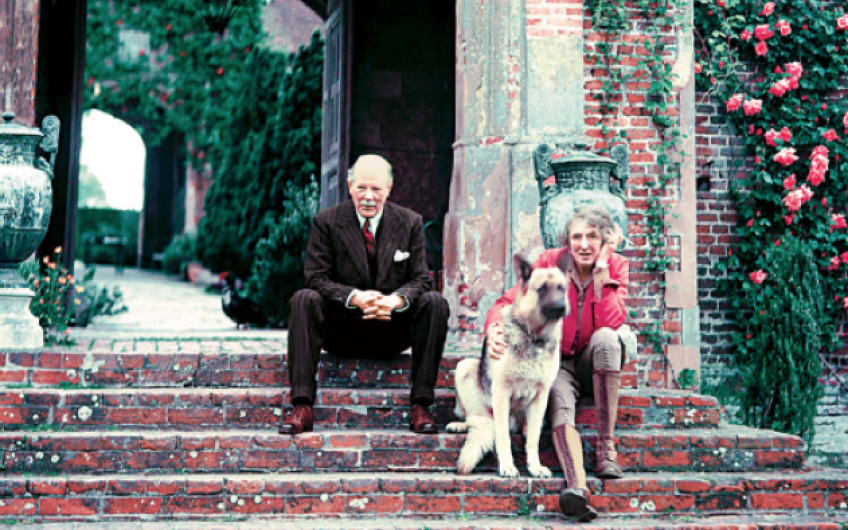 ‘So they began to search the Weald of Kent and Sussex for another house where they would be unmolested by chickens or commuters, and where they could make a new garden. They found Sissinghurst Castle.’

Thus Nigel Nicolson’s annotation following his father’s diary entry of 4th March 1930 in which the diplomat, author, diarist and politician bewailed the news of a poultry farm being set up next to his and his wife Vita’s idyllic Long Barn – a worry, incidentally, that didn’t materialise but which led, eventually, to the creation elsewhere of what many people regard as England’s finest garden.

In 1913 Harold Nicolson (1886-1968), dapper and ‘by temperament an aristocrat’, married Vita Sackville-West (1892-1962), aristocratic by birth (both pictured above at Sissinghurst). Both led ‘colourful’ lives well enough chronicled in 1973 by younger son Nigel’s page-turning Portrait of a Marriage. Harold died fifty years ago, in May 1968, and what follows here can only be concerned with his and Vita’s life together as gardeners.

In April 1930 Harold and Vita, with elder son Ben and all the dogs, drove to Sissinghurst: ‘We get a view of the two towers as we approach. We go round carefully in the mud. I am cold and calm but I like it.’ At around the same time Nigel visited with his mother in the company of poet Dorothy Wellesley, and recalled the estate (through thirteen-year-old eyes) as ‘quite impossible’. The Sissinghurst that Vita bought on 7th May 1930 for £12,000 (costing ‘another good £15,000 to put it in order’, thought Harold) was the remains of a large Tudor and Elizabethan mansion once possessed by her Sackville ancestors. At the time of purchase no room was habitable and the family spent the first night there in the bailiff’s house (South Cottage) beside a boy-scout fire with one candle, dining on Harold’s least favourite food: sardines, soup from a tablet and tinned tongue. The garden, ‘worse than non-existent’, was, said Nigel, ‘a rubbish dump’.

But, my, how they got to work. The Moat Walk was soon cleared, giving Vita ever more walls for her beloved climbing plants – roses and clematis especially. Within two years, the courtyard had been cleared and set to lawn and what was to become the famous White Garden (an inspiration for its kind throughout the world) was laid out, and the area known as Delos was filled with vegetables. The Rondel, surrounded by clipped yew, was laid out soon after, and by 1936 paving had been laid in the Lime Walk.

A plan of Sissinghurst reveals the almost total absence of right angles, a potential nightmare for any garden designer. If Vita is credited with furnishing the garden with flowers (choosing the best varieties, a lesson learned from Lawrence Johnston at Hidcote), it was Harold who masterminded its intricacy, expertly connecting each of the garden rooms, inspired perhaps by geometrically precise Islamic gardens seen during his diplomatic postings in Constantinople and Tehran. The result – the maximum informality of planting, combined with the maximum formality of design – is of enduring supremacy.

Harold outlived Vita by six years; a year before his death, the National Trust acquired the entire property where, today, head gardener Troy Scott Smith is on record as saying that it has lost its way: ‘In becoming a totem of horticultural perfectionism, it has forgotten what is really is.’

Its many thousands of garden-minded visitors will not agree. For them it remains the ultimate destination. Bravo Harold, bravo Vita, bravo a succession of spirited individuals who have kept the flame alight, and bravo Troy for addressing its future needs.