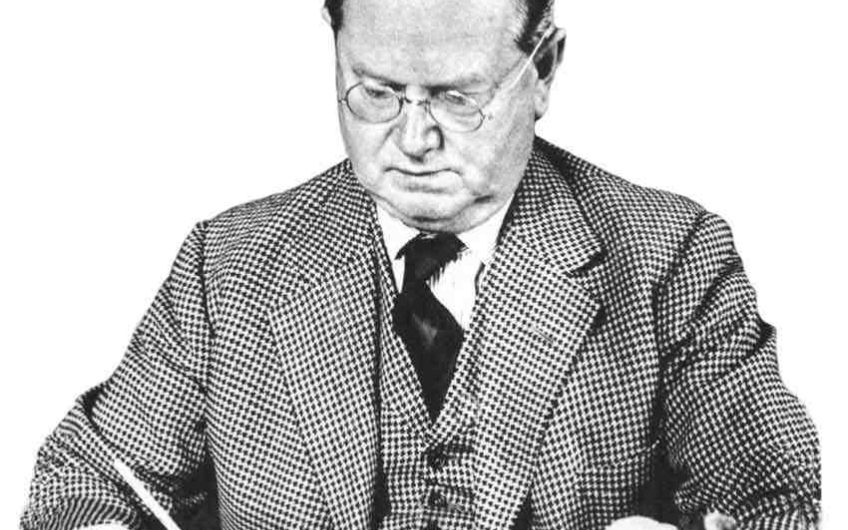 Evelyn Waugh: signing like a lord
View Full Size
1
of 1

Visitors’ books go back to the 18th century – and they’re crucial for biographers, says Eleanor Doughty

‘Don’t you dare THINK of leaving without signing the book!’

How often I’ve heard that. Some of us have even shouted it.

The visitors’ book has had a quiet year but, as restrictions loosen, it’s about to come off furlough.

No one seems to know when the first visitors’ book was opened but, in 1930, one from Lord Rodney’s Mayfair home was found dating from 1781.

You’d think the etiquette would be easy: it’s a book for names and dates, right? Increasingly, no, it isn’t.

What about comments? And photographs? And – gasp – drawings?

Most families I surveyed were adamant that one never writes a comment.

‘As everyone is inclined to say they had a nice time, comments become competitive and meaningless,’ says James Birch of Doddington Hall, near Lincoln.

The late Countess Mountbatten of Burma’s visitors’ book was strictly names and dates. ‘If she failed to get someone’s signature, she’d pencil in who it was, and take the book with her across the world, saying, “When you were staying, you didn’t sign the book. Would you mind?”’ her son the Hon Michael-John Knatchbull told me last year.

The Churchills’ book, which began in April 1924 when they moved into Chartwell, was similarly austere – though dazzling in its cast list.

After the 1945 general election, lost by Churchill, members of his Chequers house party all signed the book.

‘My father signed last of all,’ recalled his daughter, the late Lady Soames. ‘Beneath his signature he wrote, “Finis”.’

This record of history is why visitors’ books remain relevant. They uniquely capture the moment, says Trevor Pickett, founder of luxury leather-goods brand Pickett: ‘It’s a reference point – you can see who came, and when. You’re never going to get that from a mobile-phone diary.’

And authors will thank you. In the 1930s, when Unity Mitford visited Lucy Goldschmidt-Rothschild at Engleithen in Austria, she signed the visitors’ book.

David Pryce-Jones wrote in his 1977 biography: ‘With a flourish, she put a huge swastika opposite her name.’

Not all visitors’ books are so rigid. The Duchess of Fife responded to my questions with an extraordinary tale. In the 1890s at Mar Lodge, the Fifes’ former sporting lodge in Aberdeenshire, guests not only signed their names in the book alongside a description of how they were dressed, but ‘were weighed in on the scales, and weighed again at the end of their stay’.

At Sandringham, there was a similar custom, said to have been introduced by the Prince of Wales, brother of Louise, Duchess of Fife. When Queen Victoria visited Mar Lodge in 1891, she declined a weigh-in. The duchess notes that after Sir William Gordon-Cumming was blackballed, following a royal baccarat scandal, ‘His entries were crossed out but his dog’s remained in!’

Stranger still is the case of William Ward, 2nd Earl of Dudley, who arrived at Mar Lodge on 20th September 1892 and lost 5lb over his stay. His weight dropped 2lb ‘after [his] missing four stags’, and then another 3lb ‘after missing four more’.

Traditionally, when a peer signs, it is solely by his title. Evelyn Waugh tried this out when visiting the Lygon family at Madresfield Court in Worcestershire. As Jane Mulvagh wrote in Madresfield: The Real Brideshead, ‘On one occasion, Waugh, in imitation of the abbreviated entries made by two peers in the visitors’ book, signed himself simply “Waugh”. “When were you ennobled?” waspish Sibell Lygon asked.’

Having once been made to pose for a surprise portrait in a visitors’ book, I remain in the ‘no comment’ camp, but the consensus is weakening. ‘I was brought up to do name and date but, as I get older, I become more eccentric and not bothered,’ says the Countess of Carnarvon.

The Duchess of Argyll is equally relaxed. ‘There is rather a British snobbery about visitors’ books,’ she says. ‘Personally, I can’t get too het up about it.’

Famous guests visiting her at Inveraray Castle are treated to a photograph ‘in a Duke or Duchess apron, as sold in our shop’, which she adds to the book.

At Knebworth House, Hertfordshire, Henry Lytton-Cobbold encourages comments. ‘We want some praise for our hospitality,’ he says. A highlight is Noel Gallagher’s. ‘After having had a bath in our four-poster bath during the Oasis concert weekend in August 1996, he wrote, “Noel Gallagher – clean,” and, underneath, his bodyguard wrote, “Rufus – dirty.” ’

The one thing everyone can agree on is that members of the royal family should get a fresh page to themselves. ‘Once, when a guest added himself to a royal page, the guest’s name had to be scratched out,’ remembers a country hostess. Though the Mar Lodge book does not permit Queen Victoria her own page, a reliable respondent explains that at Sandringham ‘they give you a particular pen to use, and draw a pencil line where you sign. The line is subsequently rubbed out.’

Most tales of visitors’ books come from grand families, but what’s to stop you having one in your own home?

Nothing, says Pickett. ‘What’s grand about you being remembered for being here?’

The answers to the 2021 Christmas Quiz - Marcus Berkmann