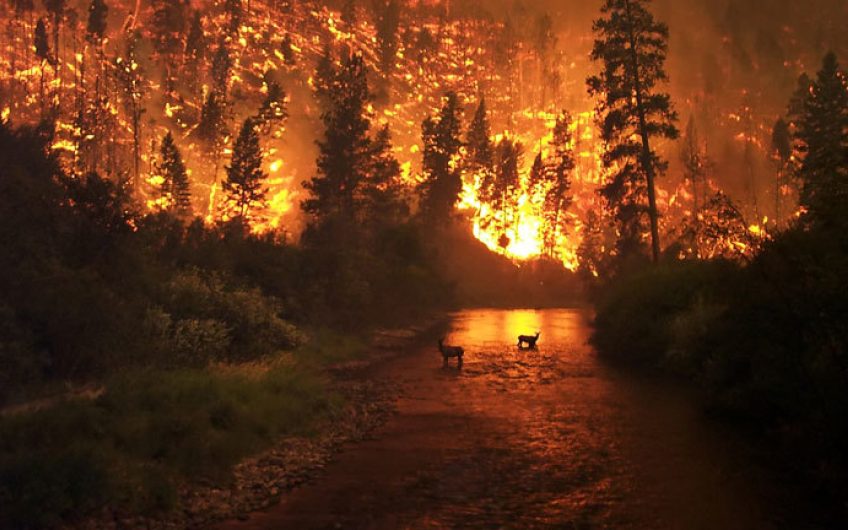 A wildfire in the Bitterroot National Forest in Montana, United States
View Full Size
1
of 1

In 1770, Captain Cook was exploring the east coast of Australia. In his notes he described the land as a ‘continent of smoke’. And it is so again…

A storm of righteous rage snarls forth on Twitter as ecowarriors and climate doomsayers all cackle ‘I told you so’. At last, they ask, is the victory of the teenage eco-messiah at hand?

With an entire continent ablaze, one would think so. And yet, there is another view.

The fires are a result of well-intentioned but flawed environmental policy.

It is unclear what Cook saw 250 years ago. It may have just been campfires, but what we do know is that, for centuries, the Aborigines used controlled burns of flora all over the continent. The purpose? To facilitate hunting and the growth of edible veg through the use of fire-stick farming, a type of controlled burn.

This has continued to this day for cattle farming. Every few years, the grass gets too thick and dry for cattle to eat. So it is burned away to allow for fresher grass to take its place and provide feed for the herd.

Another reason is the need to reduce excess fuel that might lead to uncontrolled burnings. As an Aboriginal teacher told NPR, ‘Fire in this place is our friend. Fire has been used to maintain, to look after this whole continent forever.’

Consider the fires that followed the Florida drought of 1995. A mass outburst of wildfires resulted in numerous people losing their homes. The blaze took because of the ending of controlled burning in the area some while previously. The end of the controlled burns led to a build-up of leaves and loose wood that effectively became tinder. And (surprise, surprise) the fire was all the brighter for it!

In Australia it seems the systematic under-burning of wildfire-prone forest has become policy. There are also numerous examples over the last twenty years of individual landholders and companies being fined for cutting down trees – the purpose of which is to prevent fires!

And not just that. Some have even been fined for collecting deadwood, which is nothing if not fuel for the blazes we’re seeing now. But because it is ‘part of the animals’ natural ecosystem’ it mustn’t be touched!

The charges of ‘environmental vandalism’ directed at these property owners rather sums it up. The theory matters more than the practice.

It does seem to be inevitable with the eco-types (who seem to be almost entirely citybound, or is that just me?). There is no questioning their intent. It is noble. It simply bears bad fruit.

In Australia, authorities have banned the removal of deadwood and other debris as it damages the natural habitat of animals. This decision has, at least in part, contributed to the death of an estimated half a billion animals. Not the desired outcome, I assume?

Here we see the problem with loving nature in the way that ecowarriors, and – dare I say so in their month, Veganuary – vegans do. The sentimentality.

They see everything in black and white. You are either saving nature or destroying it. Country folk – that is the real country folk, who live rurally full-time, rather than the city-slickers who have a rural getaway for when they’ve had enough of the big smoke – know that nature requires balance. Because what seems like cruelty in the short-term is often kindness in the long.

Perry Worsthorne, my wonderful one-off of a godfather - by Nick Welch

The man who also painted pictures