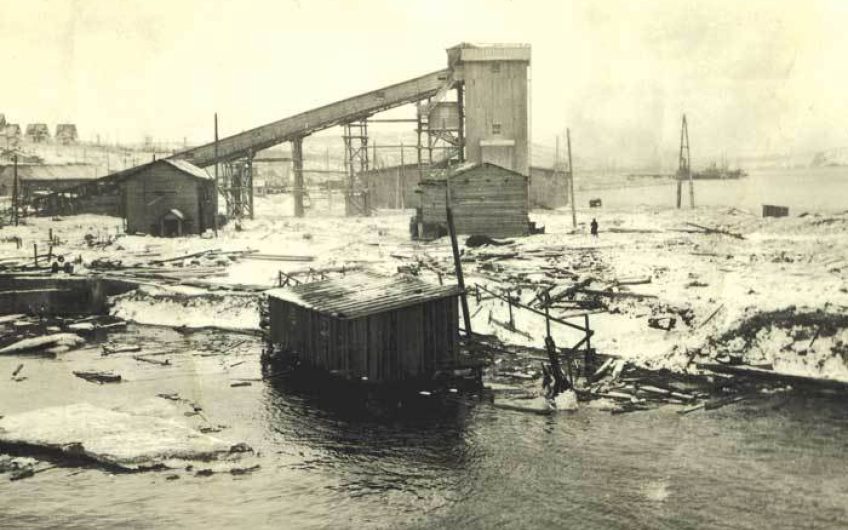 The Rosta Twenty Holer photographed by the author’s shipmate at the time, Midshipman Annett, with his Brownie camera. The shed is in the foreground showing a large piece of ice that has narrowly missed bombardment...
View Full Size
1
of 1

Correspondence on Arctic Convoys in recent editions of >span class="s1"> made me wonder whether there are still any readers who experienced the lavatorial arrangements at the dry dock at Rosta, on the Kola Inlet near Murmansk.

Ships’ lavatories, known in the Navy as ‘heads’, discharged directly into the sea which made their use in a ship in dry dock inappropriate. Consequently in all UK dockyards shoreside ‘heads’ were available close to dockside.

Having been torpedoed on PQ13, my ship HMS Trinidad entered Rosta dry dock for repairs on 7th April 1942, a day on which it was my turn to be Commander’s doggie. As soon as the ship had settled down, the Commander announced he was going to inspect the shoreside heads and that I was to find Chipnikov, the Russian Liaison Officer, to come with us. It transpired that there weren’t any heads, but a temporary arrangement had been made to satisfy HMS Oribi earlier in the year. This consisted of a wooden shed on piles overhanging the water’s edge. Inside were two boards, knee high, each with ten loo-size holes over a drop of some eight foot into the Kola Inlet. Sanitarily it was unbeatable as there was a perpetual northerly flow to take all excrement down the Kola Inlet into the Barents Sea.

The Commander was anything but happy at the complete lack of privacy and the effect on discipline of officers, senior ratings and junior sailors sharing an open lavatory which in any case was inadequate for 750 people.

‘We shall need canvas screening. Fetch me the Bo’s’n, Mid, and the Shipwright Officer.’

Luckily the Bo’s’n’s canvas store had escaped damage from the torpedo, and when I returned with him, the Commander’s mental arithmetic had been at work on how to allocate separate seatage for some 50 officers, 50 CPOs and POs and 650 sailors.

‘First, I want a screen down the middle from roof to floor to separate the ten holes on the left from the ten on the right, each with a separate entrance. The ten on the left will be for junior ratings, with the ten on the right allocated as follows: the first five to CPOs and POs, the next four to officers and the one at the end to the Captain. Lateral screening is required to separate these three allocations. Meanwhile, the chippies are to make 20 wooden boxes to take the squares of Admiralty brown paper.’

We then returned to the ship to compose a Commander’s Temporary Memorandum entitled ‘Use of Shoreside Heads’ which was to have a full distribution. Meanwhile the Captain had graciously offered to share his hole with the three Commanders, the PMO (Principal Medical Officer) and the Padre.

PQ13 had been our second Arctic convoy and a good deal of comradeship had been generated amongst the ship’s Company in the seven months since commissioning. This, plus the British sailor’s ability to turn any difficulty into a new form of sport, ensured that the Commander’s arrangements were endured during our five weeks in the dry dock. The view of the water between one’s legs took in practically the whole of the discharge area of what was soon to be known as the ‘Rosta Twenty Holer’, and at that time of the year this included large pieces of ice sailing slowly underneath. As a gamekeeper’s son said to his neighbour: ‘Hold it, Geordie, that’s your bird.’ Targeting pieces of ice soon became a competitive sport, greeted with shouts of applause or derision together with witty but unprintable comments.

Sadly the good patching work by the Russian welders only lasted until 15th May when the ship was set on fire by German bombers and eventually sank.

It may interest readers of my vintage to see some official statistics of the Arctic convoys which were passed to me a few years ago:

What was Yorkshire Television? Remembering Austin Mitchell, the former MP, who's died at 86

Can camellias capture the zeitgeist?

What was The King’s Christmas Pudding? - Kaori O'Connor