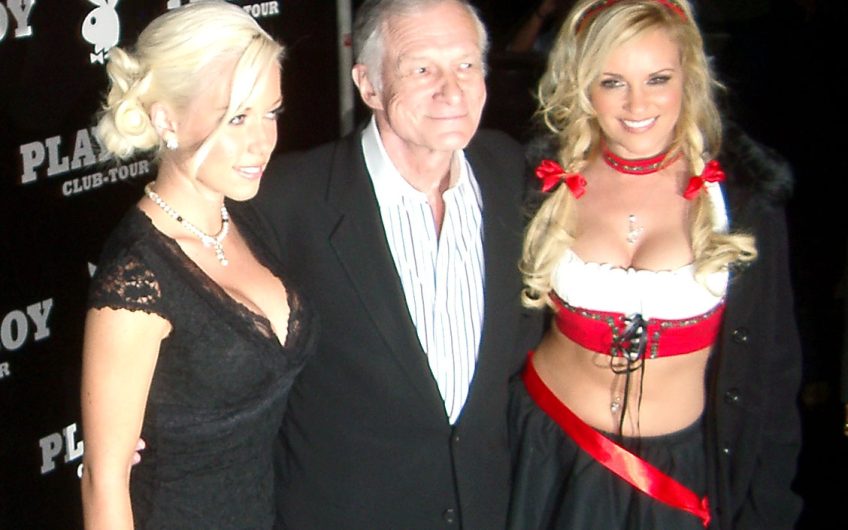 Hefner is about to be the subject of a new documentary. He may have been the most sex-obsessed oldie of modern times, but his manners and knowledge of history were impeccable, says Harry Mount

When I interviewed Hugh Hefner, he was a mere 79, but he still had three girlfriends, Holly, 25, Bridget, 32, and Kendra, 20. (Kendra and Bridget flank him in the above picture).

Even that was a decline from his peak, when he had seven girlfriends on the go. As he told me, 'I thinned the herd a couple of years ago because there were some rivalries, some petty jealousies and I was trying to emphasise the quality.'

'Thinned the herd' sounds pretty horrible but, in fact, he said it tongue-in-cheek, realising how terribly brutal the expression was. He said it deadpan but, as he intended, it was funny.

I'm not defending his lifestyle. The Playboy Mansion in the Holmby Hills, Los Angeles, is a splendid mock-Elizabethan mansion but its fittings were a little sleazy, not least Hef's grotto - fitted with a rather tired shag pile carpet, lined with mirrors, and equipped with trays of massage oils. The mind boggled as I toured the place.

To talk to, though, Hef was nothing but polite, funny and highly intelligent - how else would he have built his enormous empire? He was quick and self-aware, too. When I asked him where his sex obsession came from, he said, double quick, 'It's all your fault!', meaning the fault of the first puritanical English settlers to America.

Hefner was a 10th-generation descendant of a passenger on the Mayflower, and he put his wildness down to a repressed upbringing in Chicago, son of an accountant father and teacher mother.

'It was very Midwestern, very Puritan, typically American,' he said, 'My folks were prohibitionist; they didn't smoke or drink. My mother always encouraged me to ask "Why?", and I think I've always asked "Why?", though I've come to some different conclusions from her.'

Those conclusions were pretty outrageous - but, all the same, interviewing him was a pleasure.

Winners of The Oldie of the Year Awards 2021

The joys of watching dry paint

Auberon Waugh and the joy of wine. By Giles Kime