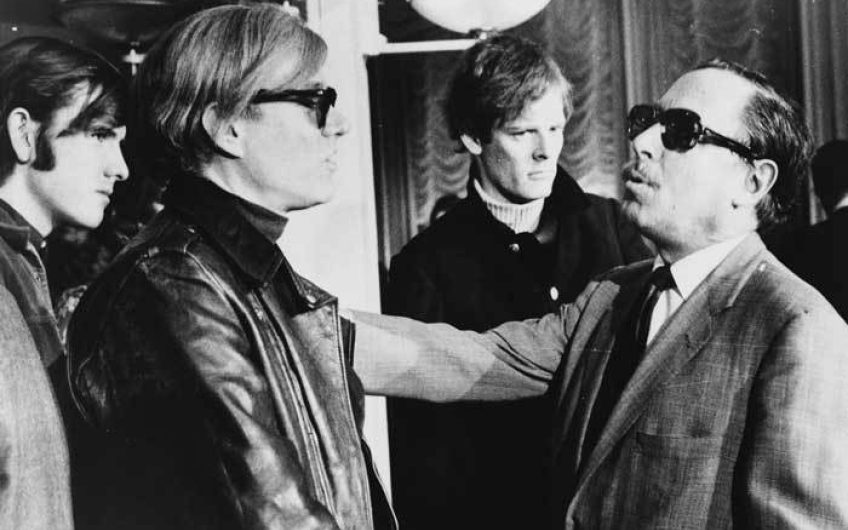 In the early Eighties I was a chauffeur for a Mercedes car hire firm in West Berlin. One day I was sent to the Hotel Kempinski to pick up four customers and take them to East Berlin. When I arrived at the Kempinski I found that one of the four was Andy Warhol, who was in West Berlin to visit an exhibition in the Martin-Gropius-Bau. The others were a Canadian author whose name I have forgotten and two tattooed leather-and-steel clad gentlemen friends of the Canadian and Warhol.

At first everything went OK. We drove through Checkpoint Charlie, made a compulsory money exchange, visited the usual tourist sites of East Berlin, the Pergamon Museum, Alexander Platz and, of course, the Russian cemetery in Treptow. On our way back to West Berlin I pointed out to Mr Warhol that none of us would be able to take our East German marks out of East Berlin. Warhol asked me what we could buy with the money and I suggested going to a souvenir shop. It was agreed and drove them to a shop in Treptower Park. Warhol bought some kitsch, a replica of the TV tower at Alexander Platz. The Canadian bought something small, and the two ‘heavies’ purchased an armful.

The trouble started when one of the boy friends asked me to ask the shop assistant for another brown paper bag. (Should explain here that this was East Berlin, not Times Square, and that with his purchase each customer got one paper bag, and one only.) I explained the situation to lover boy but he insisted that I should ask anyway. I did and, as I knew would happen, the request was refused. I translated this for angel face and after looking heavenwards for guidance he told me to ask that ‘asshole’ for a ‘BROWN PAPER BAG - GODDAMMIT’ - which I did and was again refused. This went on for another couple of times, Warhol’s friend getting progressively noisier. After a couple of ‘Does she know who the f***, she is dealing with?’ he slowly sank to his knees and with his hands held high, tears streaming down his face - he shouted at the top of his voice: ‘All I want for Christ’ sake is a f***ing brown paper bag.’

A deathly silence fell over the shop. Warhol had a half grin on his face but I noticed one assistant saying to the other ‘Call the Stasi’ (secret police). I said to Warhol that if we didn’t get away smartish we would all wind up in the huge complex at Alexander Platz that housed the Staatssicherheitsdienst and that the least that would happen would be that we would have to cool our heels for a few hours for disturbing the peace. I reminded Warhol of his appointment that evening at the Martin-Gropius-Bau and told him we should leave immediately. The Canadian and the other fine example of American manhood dragged their by now hysterical friend back to the car. I raced to Checkpoint Charlie and we passed back into West Berlin and to the Kempinski. On the way back, the Canadian started to sing that song that Bob Hope sang in Pate Face - ‘East is East and West is West, and the wrong one I have chose’. Everyone laughed (Warhol just grinned) and the hysterical one went back to being the lovely broken-nosed, scarfaced, sweet young thing he was before. I was glad to see them get out of the car and out of my sight.