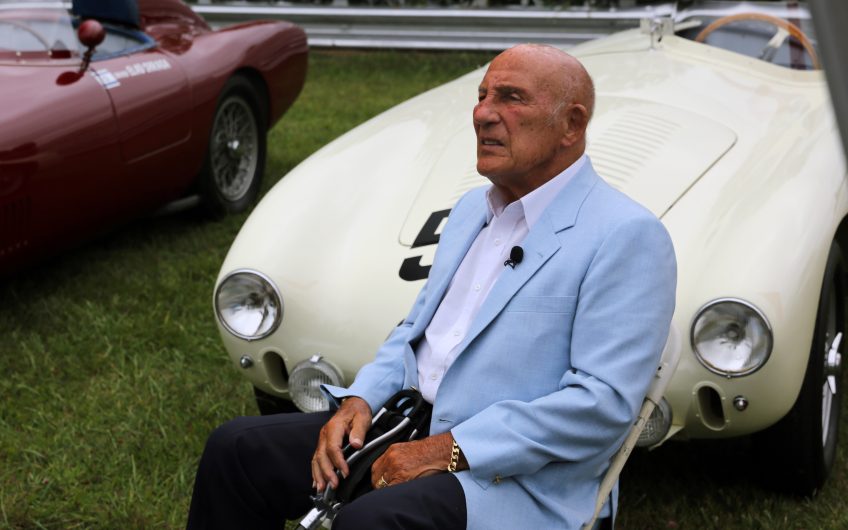 I visited Stirling Moss two or three times at his home in London’s Mayfair. He was often called ‘the greatest driver never to win the World Championship’.

Moss would compete in as many as 62 races in a single year and drove 84 different marques of car over the course of his racing career, including Lotus, Vanwall, Maserati, Jaguar, Ferrari and Porsche. Like many drivers of the era, he competed in several formulas—sometimes on the same day. He was placed second in the Drivers’ Championship four times in a row from 1955 to 1958.

“I was the highest paid driver in ’61, and my total gross income was £32,700,” he said. “And that was good money. I first drove a car when I was about six, possibly earlier – sitting on my mother’s lap – just up and down our front drive at Maidenhead. I think we had a Lancia. Then when I was six or seven, I had my own car – an Austin 7 – on my father’s farm. I hadn’t decided to be a racing driver then; I was expecting to be a dentist like my father. But I wasn’t bright enough to be a dentist, so I became a driver. I first raced at 17. If you’re not bright enough to do anything else, you have to be driver or an MP, and I didn’t want to be an MP, so what else do you do?’

Although Moss was close to death in two major crashes, he claims it left him none the worse mentally. But to my mild surprise he said he believed in divine intervention – of a sort. ‘Each time I had a crash, with the exception of my last crash when I don’t know what happened – but in the other crashes... I had a wheel come off at 140mph at Spa, at the Belgian Grand Prix, and broke my back and my legs, and finished up in hospital, obviously, and although it concerned me, because you don’t want to crash, at least I knew what the reason was! And it wasn’t my own shortcomings.

‘Yes, I do believe in God. Otherwise I don’t think I’d be alive. I think He did look after me. Otherwise if He’d wanted me it would have been so easy for Him to say, “alright, right, come in”. Maybe He didn’t want to mess the place up. God moves in mysterious ways and I don’t know the answers. I don’t know if there’s life after death, but otherwise it’s all such a waste of time. One builds up all these relationships, but where the hell we’re all going to go I’ve no idea. I’d like to think there’s motor racing wherever it is. I’ve had a fantastic life from it. But of course I don’t know what the options are… I’m not religious. I’m a believer – but I’m not a religious person. And I’m not a solo person at all. I don’t enjoy my own company.

‘The first important success I had was when I was 20. A journalist friend offered me his Jaguar XK120 to race in the RAC Tourist Trophy which is a classic race, because he was driving something else. In 1950, it was held at the Dundrod Circuit, high in the hills above Belfast. Nobody else would lend me a car – I think they thought I was going to kill myself, and it was pouring with rain and I managed to win the race outright.’

He did the same the following year, and dominated the event for the next decade as it switched to Goodwood. It was at Goodwood, many years later, that Moss was badly injured in a crash while driving a Lotus in the Glover Trophy. The accident put him in a coma for six months and partially paralyzed the left side of his body. Although he recovered, he decided to retire from racing the following year.

So what was it that Moss had that he would use to such spectacular effect throughout his career that would make him a household name? ‘It’s tenacity, the feeling of balance...’ he started to explain... ‘It isn’t courage – it’s being able to make the best possible use of the skills you’ve got. It’s rather like the strongest man isn’t necessarily the best boxer. Just because I can hit you harder than you can hit me doesn’t mean to say I’m going to beat you. It takes a lot more – there’s skill in it. In motor racing it isn’t just a question of bravely putting your foot down. There’s a lot more to driving, and driving particularly in the wet was beneficial to me – I happen to be good in the wet, I suppose because I have a feel for the car.’

His most memorable moment? ‘On the winner’s dais at Monte Carlo in the 1961 Monaco Grand Prix, I guess. It was probably my greatest race. Because for the whole three hours and 40 minutes – 100 laps – I had a very under-powered Lotus – 40 horsepower less than the three Ferraris, and yet the distance between me and the drivers who were second and third was from three to six seconds every lap. It really was a big fight.’