I was a Crazy Gang Chorus Girl 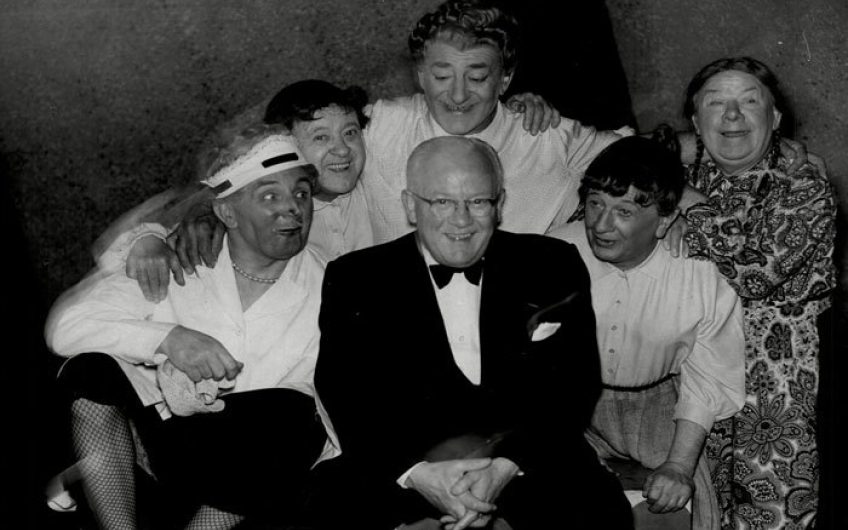 I can smell the greasepaint now. Leichner 5 & 9 and I’ve forgotten what else, but that smell...! I was having lunch with my old friend Gai Pearl and we were reminiscing. We’d been together in Knights of Madness, the Crazy Gang show at the Victoria Palace in the early Fifties.

‘Do you remember when Charlie Naughton locked me in the loo?’ said Gai. ‘No. What happened?’ ‘I missed two numbers. I was on Punishment Call and fined! At least he paid my fine though.’

Gai and I hadn’t met for years; we’d lost touch and found each other again by sheer chance. She had gone on to become a famous dancer in Italy, married, and was now big in PR for Italian fashion houses. I’d had a husband and lots of children in Norfolk.

‘Then, another time,’ she continued, ‘in “Dig-a-Doo”, the whole row of us danced onto the stage in Zulu costume with black curly wigs – I was in the middle – and suddenly I was yanked to a standstill. My wig hooked up on the scenery and I went through all the motions on the spot for the rest of the number. The solo up front wondered what on earth the audience was laughing at.’

The Crazy Gang Shows had been revived after the war by Jack Hylton, and Knights of Madness ran for two and a half years. The Gang at that time consisted of Nervo and Knox, Naughton and Gold, and Bud Flanagan – in his battered straw hat and enormous old racoon coat. Chesney Allen, Bud’s partner, had retired, ill, in 1946. Freddie Bretherton conducted the orchestra and Grace Draper, Gillian Roma and Linda Lee were the leading ladies. Sundry speciality acts filled the gaps. I was one of six showgirls picked for good voices, height and looks. Together with a dozen or so dancers, girls and boys, we provided the glamour in the brilliant twice-nightly explosion of lights and colour and music and fun.

One night in the second performance, the six of us strutted onto the stage singing ‘Musical Demon’, a Twenties number. We wore tight black satin dresses fringed with white, white satin cloche caps and high-heeled, cross-laced white shoes. Except me. My plain black courts stood out like a sore thumb. Or two. Oh Lord! I almost lost my smile, for the consequences would be dire.

After the number, back in the dressing room, the Tannoy crackled into life. ‘Miss Foster... Prompt Corner In The Interval PLEASE!’ It was the stage manager speaking in C-A-P-I-T-A-L letters and he wasn’t known as ‘Adolf Hitler’ for nothing. I was sentenced to be at the theatre at half-past nine the next morning on Punishment Call. Nine thirty! By the time I got back to my digs, had dinner and time to unwind it was nearly four o’clock in the morning! I needed my lie-in and having to get up at seven o’clock was punishment in itself.

Despite bus and train delays I was there on time. So was Adolf (he’d had to get up early too), and what a telling off I got! I then had to sit in the semi-dark stalls until released, thoroughly diminished, an hour or so later. I was too naïve and vulnerable in those days to protest. You could be forgiven for thinking that this all happened during the inmates’ annual concert.

The girls’ dressing rooms were on the far side of the stage up a narrow winding stone staircase. We showgirls had the middle room. Mirrors stuck with telegrams and good luck cards and bordered with bright lights ranged down one wall; the long dressing table held makeup boxes, pots of cream and powder, mascots, and all the paraphernalia marking our individual places. On the opposite wall and on a rail at the far end near the washbasins hung our voluminous costumes, cared for by Barbara, our beloved dresser-cum-‘Mum’. Between frantic changes she sat and knitted, listened to our woes and chatter and made our interval tea.

Most of us, most of the time, didn’t have boyfriends. The audiences wouldn’t have believed this and we, too, thought it odd; we were all so dishy! Most of us were virginally innocent – reluctantly, to judge by our conversation, which veered from this phenomenon to the love life of whoever was lucky enough to have one. Great excitement erupted when one of us arrived starry-eyed about a marvellous man she’d met. We’d all rush out after the show to give him the once over as he waited for her at the stage door.

Tall, elegant Frances told us one Monday that she had met Ray Milland at a party that weekend. She was surprisingly cagey and blushed a lot, confessing that he’d paid her a great deal of attention and called her a beautiful English rose. She had agreed to go out with him after the show. We were sworn to secrecy and all promised faithfully not to stare if we saw him waiting. He really was there, leaning on a lamp post on the opposite side of the road, looking for all the world like Ray Milland in a Hollywood movie, coat collar turned up and the brim of his trilby pulled down, hands deep in his pockets.

The next evening in the dressing room, we clamoured for details but didn’t get them. Frances blushed even more and quietly said she’d had a lovely time. It was different in those days. Romance was the thing. Sex was still pretty private and ‘the media’ hadn’t been invented. We read in the paper later that Mr Milland had returned to the States – and to his wife.

Fay was a different kettle of fish altogether. She was large, loud, exceptionally pretty and very white-skinned. Her steady boyfriend came and went as his job directed. One weekend they’d made the most of his return and she arrived late for the Monday evening show, wide-eyed and worried. The rest of us were made-up and waiting in bras and pants ready to don our first costumes. Fay stripped off. We gasped and hooted. ‘Oh help!’ she moaned.

She was covered in love bites. Brilliant black and purple ones all over her shoulders, neck, arms and thighs.

‘Fifteen minutes, please,’ called a voice over the Tannoy, and we all sprang into action.

‘You do your face!’ I yelled at Fay. ‘Come on, Fran, you do that side and I’ll do this.’ For ten frantic minutes I daubed makeup on the love bites on one side and Fran did the same on the other, while Fay, with difficulty, struggled in the middle to do her face. She looked only slightly less piebald when we’d finished and had to brave the witticisms of the Gang and others until the marks faded a long time later.

I reminded Gai about the café opposite the Victoria Palace stage door. We used to congregate there before the show, dancers and showgirls and others from about 4.30 pm onwards. Friendships were started here – and finished. Assignations were made, gossip exchanged and grievances aired. There was invariably a weedy man at another table ogling the girls (or the boys) but nobody minded. Those days we felt safe. No matter how late I left the theatre – and it was never before 11.30 pm – I had no qualms about travelling back to my digs alone, walking quite some way in the dark from the station.

Gai reminded me about a Sunday shortly before the show folded. She’d telephoned to ask me to go with her that night to a party on board a P&O ship in East Ham Docks. I was to be the blind date of the host, the young Second Officer. I went...

Reader, I married him.

Will my dog have a post-lockdown breakdown?